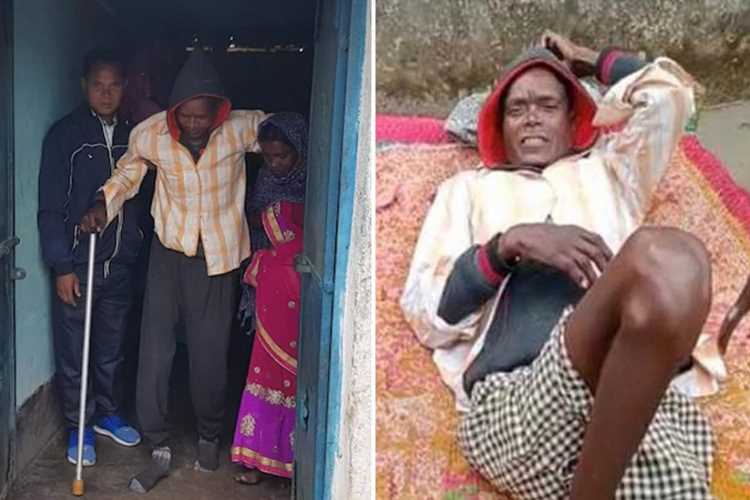 A BEDRIDDEN grandad who was left paralysed and unable to talk following an accident five years ago has claimed he's made a miracle recovery after having a Covid jab.

Dularchand Munda, 55, left medics in India open-mouthed after he reportedly regained the ability to walk hours after being given a dose of the life-saving vaccine.

Munda, who lives in Salgadih, Jharkhand, suffered spine injuries in a car crash back five years ago.

He was reportedly left bed-bound for years and was unable to walk or talk.

But according to local media, Munda has stunned doctors by regaining some movement in his legs and by speaking again.

He told NDTV: "I am glad that I have taken the vaccine.

"I can move my legs after taking the vaccine on January 4."

Footage shows the moment Munda was helped to his feet before taking a step – aided by a walking stick.

Dr Albela Kerketta, of Peterwar Community Health Centre, says his family noticed he was able to move 24 hours after having a Covid jab on January 4.

“Munda was given a Covishield vaccine by an Anganwadi worker on January 4 at his house," he said.

"The next day, the family members were shocked when they saw Munda’s lifeless body not only started to move but he regained his speech too."

The doctor reportedly confirmed that Munda was completely bedridden due to his spine injury.

“This is a matter of investigation as we had already seen his reports," Dr Kerketta added.

"Accurate information and answers will be available in the coming days when the medical world will conduct research on Dularchand Munda's illness and his recovery."