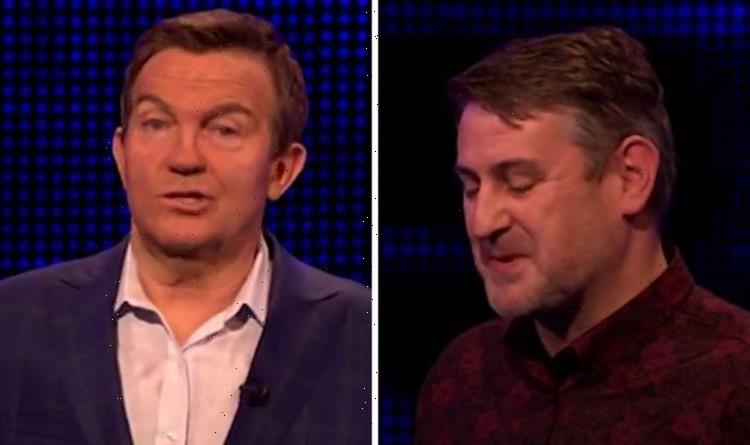 Bradley Walsh introduced players Emma, Graham, Lucie and Olly on Monday’s instalment of The Chase. Lorry driver Olly was the first contestant to have questions fired at him and he raised an impressive £8,000 in the cash builder round. However, the next round didn’t go as smoothly as he admitted to Bradley he’d forgotten the name of his favourite Chaser.

Olly sailed through the first round of the instalment, however, when Bradley asked him which Chaser he’d like to play against his mind went black.

The 61-year-old host was taken aback and replied: “It’s all right, what does he look like? Is he tall, big and round or is he sort of bald? Does he wear a white suit?”

Olly explained: “I’ve got it now, he wears a black suit with a bald head and then glasses and he’s a terrible singer.”

Bradley quipped: “I didn’t know, bald, glasses, dark suit – we are twins I know – but I wouldn’t have known who it was.

“As soon as you said shocking singer I knew straight away. It’s time to bring on the Chaser.”

While Olly was hoping to go up against Shaun ‘The Dark Destroyer’ Wallace, the Chaser for the episode was Paul ‘The Sinnerman’ Sinha.

Luckily, Olly managed to beat The Sinnerman and made it into the final of the episode.

Many viewers took to social media to comment on Olly’s blunder, with some saying the blip should have been cut out of the final edit.

Johnny Mac fumed: “Did they have to keep that blunder in? #TheChase”

Ann Howarth said: “Olly seems really nice and modest, but nervous. Glad he got through. #TheChase”

However, some ITV viewers found the error amusing with @SCDP_NY remarking: “I want to play this chaser but have forgotten his name. Great start. #TheChase”

Geoff added: “One for the bloopers show. #TheChase”

Despite his error at the start of the show, Olly proved he was a worthy contender and he played in the final alongside Lucie for £9,000.

Unfortunately, the pair were caught by The Sinnerman with 52 seconds remaining which meant they had to go home with nothing.

Following their defeat, The Sinnerman said: “You were two really good players, it was a really good team and you played really well.”

Bradley wished them well and admitted he thought The Sinnerman was incredibly quick during the final.

The Chase continues weekdays at 5pm on ITV.