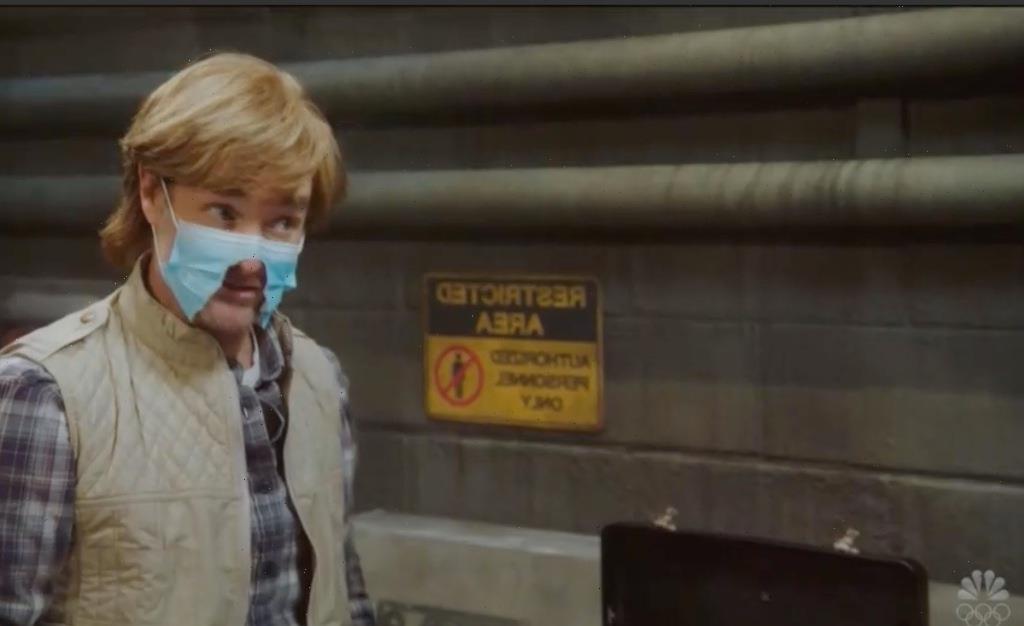 Former “Saturday Night Live” cast member Will Forte made his hosting debut this week, reviving his beloved character MacGruber. It turns out, though, that MacGruber has been taken in by the anti-vax crowd.

The first MacGruber sketch of the night saw the action hero and his cohorts Vicki (Kristen Wiig) and Piper (Ryan Phillippe) trapped in a small room with a bomb about to go off. All three are wearing face masks.

“I know this whole COVID situation has really changed the game, so we got to be smart about this, okay?” MacGruber says. “We’re in a small room with very limited airflow.” He then asks Vicki and Piper for their face masks, takes his own off as well, and sets all three on fire. When asked why, he says, “We need every drop of oxygen we can get, which is impossible with these stupid face diapers. I can finally breathe.”

He then presents the pair with an obviously fake vaccine card indicating he has received the “Fizer” vaccine.

In the next bit, MacGruber is taking things slightly more seriously with a new face mask, but this one has a hole cut in it so he can “breathe.” When asked why the mask has a hole in it, he says it is so he doesn’t “suffocate from all the carbo-doxide.”

He then treats himself with a double dose of both ivermectin and hydroxychloroquine. He swears he doesn’t have COVID, but then follows up that he has “covi-philis,” a combination of COVID and syphilis. “And I do have an unconnected freestanding herpes in there as well,” he says. “I also have horse worms so this ivermectin is pulling double duty.”

In Forte’s opening monologue, he points out that his fellow former cast members Wiig, Bill Hader, Andy Samberg, Jason Sudeikis, and Fred Armisen were all invited back to host the show before him. “But hey, that’s okay. I’m not bitter about it,” Forte says.

His tune changes when Wiig shows up behind him, while next week’s host, Willem Dafoe, makes a surprise appearance as well.

In this week’s cold open, Kate McKinnon appeared as Fox News anchor Laura Ingraham, who railed against President Joe Biden on the anniversary of his first year in office.

“Can we all admit it’s a disaster? Inflation’s out of control. Gas is at $19 a gallon. And the green m&m has been canceled just for being a whore,” she says.

She then invites Aidy Bryant’s Ted Cruz to the show, who again apologizes for calling the Jan. 6 rioters “terrorists.”

“I never should have called them terrorists,” he says. “The truth is, they are big, burly men with big D energy. In fact, I actually like them a lot. They are my cool friends. And Donald, if you’re watching, I love you, baby. You are the king. Honestly, hit me…Hit me, choke me, spit in my face. I just want to stay in the mix.”

“Oh, and one more thing. I like to remind all my fellow Texans watching at home that February’s going to be a cold one, so you might want to book your vacay to Cancune now,” he continues. “Live mas, everybody!

Pete Davidson then appears as tennis player Novak Djokovic, who had plenty to say about his recent experience getting deported from Australia for violating COVID protocols.

“You see, people love to tear you off your pedestal just because, you know, you’re really rich or you’re the best at tennis, or you know, you go to a charity event with 200 kids even though you’re dripping with COVID,” he says. “But in my heart I know that one day people will look back on this moment in history and think, ‘Yeah, who cares?’”