‘I can remember my ex-boyfriend coming home one day with under bed restraints and bondage equipment that he’d bought from the local sex shop,’ recalls Sarah*, adding, ‘I was 16 and he was 24.’

‘I knew that they were for me, and I knew that it wasn’t something I wanted.

‘But I felt like I couldn’t say no, or ask questions about what was happening, or stop it, even if I wanted to.

Sarah had grown up in a strictly religious family and, at that point, the only sex education she had experienced was being told, ‘don’t do it.’

‘It wasn’t about women’s pleasure. I had no concept of what that was. And besides, the women seemed to enjoy it in the videos, so I felt that there was something wrong with me if I didn’t. It was my problem.’

During an eight-year-long relationship, Sarah was forced to take part in a lot of sexual activities that she didn’t want to, and perform in ways that she thought she was supposed to. 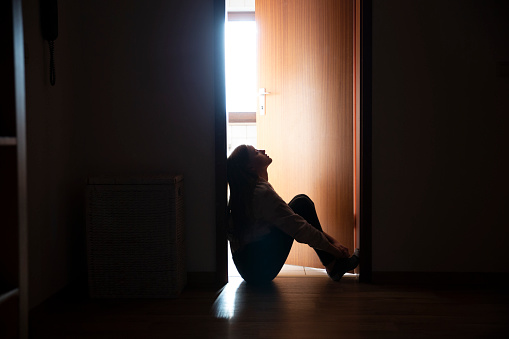 What she didn’t realise at the time was that her boyfriend was an abuser, who was taking advantage of her naivety.

After all, Sarah remembers, this was how she was used to seeing women being treated; she’d never had any other conversation or education about what sex could look like. This was what she believed was ‘normal.’

While it might be an extreme example, the way Sarah felt isn’t uncommon.

Worryingly, yet perhaps unsurprisingly, the report found that most children had viewed pornography they found disturbing, or overly aggressive.

‘It taught me that my body had to look a certain way and was basically a vehicle to make other people happy,’ she says.

Dr Linda Papadopoulos, one of the most prominent psychologists in the UK, is an Ambassador for Internet Matters, an organisation that works to support parents in keeping their kids safe online.

She likens it to watching the Fast and Furious, to learn how to parallel park.

‘Children are being presented with something that they’re not emotionally, cognitively or developmentally ready to see,’ explains Dr Linda. ‘They don’t yet have the ability to be critical of that information, or make sense of it, or to tell the difference between what’s real or what’s fake.

‘The normalisation of this is unbelievable. You often see scenes where there’s at least some form of degradation, which is a big issue. And in recent years, I’ve seen a lot more things like choking, spitting and hitting.’

Recent BBFC research discovered that British children and teenagers are, in fact, watching from an increasingly early age; in some cases as young as seven or eight.

‘He was watching some really harcore stuff by age 12, and was completely addicted when we got together, aged 16.’

Chloe believes that this early exposure and subsequent addiction massively skewed her husband James’* opinion of sex and consent. ‘I do think it played a large part in him raping me for the full five years of our relationship,’ she tells Metro.co.uk. One of these times resulted in the conception of her youngest son.

Slowly his behaviour escalated and it got to the point where James was regularly raping Chloe. She describes them takling about it quite openly and how she would usually confront him afterwards, letting him know that what he had done was rape.

Two years into the relationship, Chloe found some of the content that he was watching.

‘It all featured a power struggle,’ she recalls. ‘A businessman and a maid, or step siblings, where the sister was younger. It was all men in positions of power, where there was a struggle or force used.

‘None of it was relationship sex, or women enjoying it.

‘When I found that it kind of explained things a bit, and why he was doing what he was doing.

‘He would never listen to me saying no.’

Lianne Young, of House of Ardent, is one of UK’s leading advisors on sex, relationships and adult entertainment. ‘When children watch pornography repeatedly, this can lead to them not being sexually aroused by normal sex acts and they have to look for other ways to get their pleasure,’ she explains.

‘This is a worry as they may access sites that are much worse than simple pornography and may have violence and dominance involved. It can then lead to personality disorders and sometimes worse a growing desire to act out what they see on screen.’

Eventually, James went too far, after he ‘put bruises’ on Chloe one night, while he was raping her. This time, when she confronted him about his actions afterwards, he said, ‘it was worth it,’ rather than his usual apology.

That was when she decided to leave. The police investigation is still ongoing.

While Chloe is no longer with James, they do have shared custody over their sons. She is constantly concerned that her boys could end up being influenced by their dad’s normalisation of this type of behaviour.

She also also worries about how and when to broach the subjects with them, and wants to try and have an open conversation – but at the right time.

Ross* is 22 and first remembers seeing a photo of a topless woman in the paper at the age of nine, and it feeling ‘weird’ because she was also a presenter of a kid’s show that he watched – and now he’d seen her naked.

By the time he was around 15, Ross says it became ‘overwhelming’ and he was using it heavily.

He realised that he had an addiction when he was 18 but by this point it was too late.

‘Me and the boys chat about this all the time,’ he says. ‘All my friends started around the same age as me, around 10 or 11.

And it’s a habit they’ve all struggled to cut down on, without much success.

When should you start a conversation?

By the age of 15 children are more likely than not to have been exposed to online pornography so, talking to them early on can equip them with the right coping strategies to deal with it.

Be natural and straightforward

Try techniques like getting them to write things down, or start conversations when they don’t have to look you in the eye, for example when in the car.

Be on the lookout for teachable moments

Talking about issues as they come up on TV, in movies or online can help you kick start a conversation and give you the opportunity to talk about your values and beliefs on the issues.

Find out what they already know

Children may hear or see things at school which they have questions about. Use this as an opportunity to ask them more about what they know, dispel any myths and give them the right information.

Give them positive messages

Talk to them about loving sexual relationships and how to have respect for themselves and their boyfriend, girlfriend or partner.

Talk to them about their experiences

A deep discussion on pornography isn’t recommended for younger children. However, whatever the ages of your children, make sure that they know they can come and talk to you – and that you won’t overreact or be shocked by whatever they tell you.

Recognise that children are naturally curious about sex and like to explore. An interest in sex is a normal part of a child’s development.

If your child is young and has come across pornography by mistake, they are much more likely to need reassurance and support.

‘We’ve all tried it, but none of us have managed,’ he admits. ‘It’s definitely because it’s so easy to access pornography.’

However, due to their business model of hosting other people’s content, sites like these often aren’t always able to effectively regulate the videos that are being uploaded.

Essentially, the content goes up faster than it can be taken down, leading to lots of unethical, misogynistic and potentially illegal footage.

But there are some filmmakers and industry experts out there, determined to make a difference.

Some of her aims are to: ‘Stop showing harmful gender stereotypes and start depicting men and women as equally important sexual collaborators, and clearly show consent instead of encouraging simulations of coercion, pedophilia, or abuse,’ she tells Metro.co.uk.

This is in stark contrast to most of the stereotypical mainstream pornography, on the ‘free tube’ sites, which, typically represent a very biased and patriarchal view of sex and gender stereotypes that reflect power dynamics deeply rooted in our culture, Erika explains.

And this is having a huge impact on our children, as these are the sites they come across first.

‘As a mother of two myself, this is a very sensitive topic to me.

‘We can’t stop kids from finding these sites so instead of ignoring it or trying to ban it (which will never happen), let’s educate them.’

Dr Linda agrees with this wholeheartedly, stressing that parents can, and should, talk to their children – no matter how difficult the conversion might feel.

‘We must educate them to know what they feel comfortable with. We need to help them find the guts to say, ‘no, I don’t want that’. To not feel as though, there must be something wrong with them because they don’t want to be spat at, or strangled, or hit, or whatever it might be.’

‘However,’ she adds, ‘it’s imperative that we see more regulation in the industry. There is no silver bullet but I think we need to not let the perfect be the enemy of the good.

‘We need to do something.’