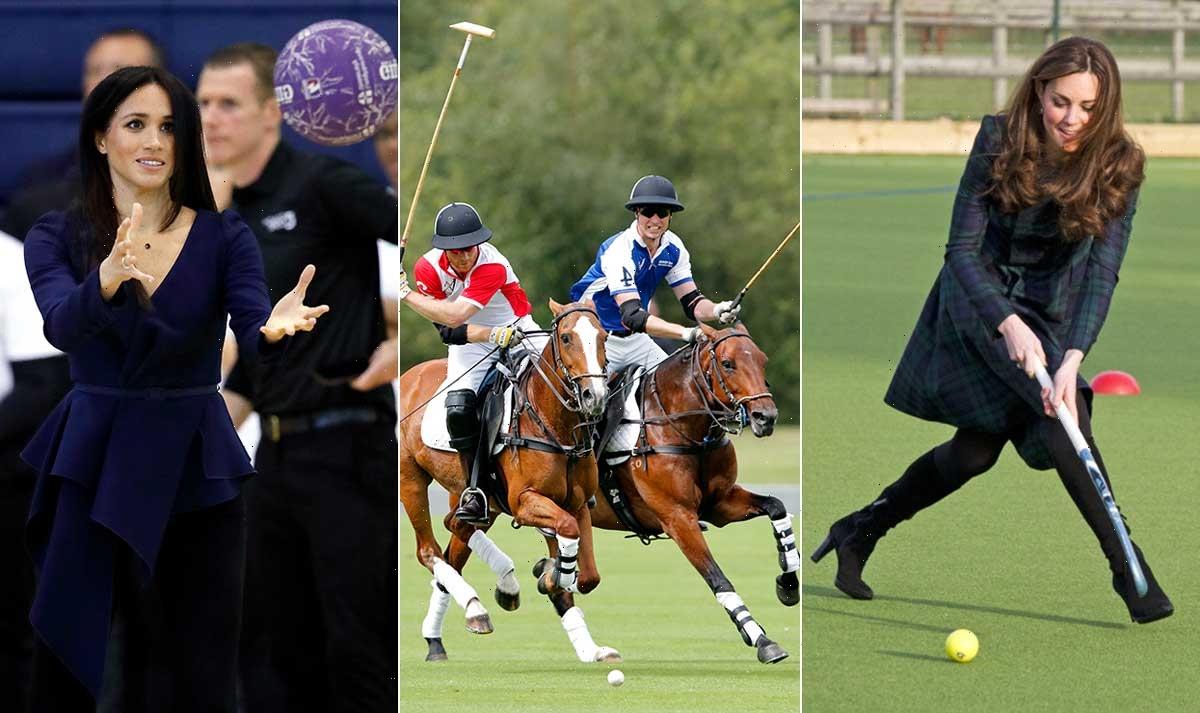 It’s no secret that the royal family are a sporty bunch, with tennis and polo being some of their favourite hobbies.

We’ve been lucky to witness some great moments during their royal engagements over the years, including the Duke and Duchess of Cambridge and Prince Harry competing against each other in a relay race in 2017.

The younger generation are already showing their love for the beautiful game, too, with Princess Charlotte pictured playing football in 2019 and Prince George attending his first England game at the Euro 2020 tournament.

Take a look at some of our favourite sporty moments from the royals.

The Countess of Wessex got back in the saddle as she joined a group of visually impaired cyclists for a tandem cycle ride in Bushy Park, West London in July 2021. Her outing was in conjunction with her patronage, Vision Foundation, to highlight the importance of independent living for blind and partially sighted people and to promote its See My Skills report. Sophie is a keen cyclist, having completed the 450-mile Diamond Challenge as she cycled from Edinburgh to London in 2016.

WATCH: Kate, William and Harry race one another on London Marathon training day in 2017

Get stuck in! Prince William tested out his football skills during a visit to Spartans FC’s Ainslie Park Stadium during his mini tour of Scotland in May 2021. The Duke is a self-confessed Aston Villa fan as well as being President of the Football Association.

MORE: 11 fun photos of the royals enjoying a bicycle ride

Lady Louise Windsor proved she was a natural at hockey in January 2020 as she accompanied her mother, the Countess of Wessex, to the training grounds of England Hockey in Bisham Abbey. The then 16-year-old showcased her skills as she practiced hitting and passing the hockey puck with members of the women’s team.

MORE: 16 fabulous photos of royals having fun at the polo

The Princess Royal’s daughter Zara Tindall followed in her mother’s footsteps and competed at the London 2012 Olympics.  As a member of the Great Britain Eventing team, she won a silver medal, which was presented to her by Princess Anne.

The Duke and Duchess of Cambridge went head-to-head during a football match at Windsor Park Stadium in Belfast, Northern Ireland, in February 2019.

MORE: 7 royals who have competed in the Olympic Games

The Duchess of Sussex got involved in a netball match when she and Prince Harry attended the Coach Core Awards at Loughborough University in September 2018.

The Countess of Wessex demonstrated her hockey skills during a visit to England Hockey at the Bisham Abbey National Sports Centre in April 2016.

The Duke of Cambridge and the Duke of Sussex took part in a charity polo match at Billingbear Polo Club in Wokingham in July 2019.

During that polo match, Princess Charlotte was spotted showing off her dribbling skills as she played football with older brother Prince George.

Things got competitive between Kate, William and Harry as they took part in a relay race during a London Marathon training session for Heads Together in 2017.

Duchess Kate takes part in a game of three tins at the Commonwealth Games in July 2014.

Kate's a royal soccer mom! She helped son Prince George get his footing in June 2015 during a charity polo match at Cirencester Park Polo Club.

Princess Beatrice got into the spirit as she ran the Virgin London Marathon in 2010 as part of a 34-person caterpillar.

High heeled boots didn't stop Kate, who played field hockey when she was in school, from showing off her moves at St Andrew's School in Berkshire, England in November 2012.

A two-piece suit won’t stand between Prince William and a friendly tennis match during an official visit to the Coventry War Memorial Park in July 2014 in Coventry, England.

Prince Harry kept his eyes on the ball during a football game with NFL representative Dan Marino and Walking with the Wounded's Walk of Britain team in England in September 2015.

Kate proved herself a skilled table tennis player during a visit to Bacon's College in 2012.

Princes Harry and William enjoyed a casual pickup game of basketball during a visit to Bacon's College in 2012.

Prince Charles impressed a crowd at the Melbourne Cricket Ground in Australia by showing off his cricket skills in November 2012.

Duchess Camilla boasts some impressive table tennis skills! She showed them off in 2005 at the Atworth Youth Club.

Kate showed off her sporty side at one of her first events after the birth of Prince George, playing volleyball at a SportsAid Athlete Workshop on October 18, 2013.