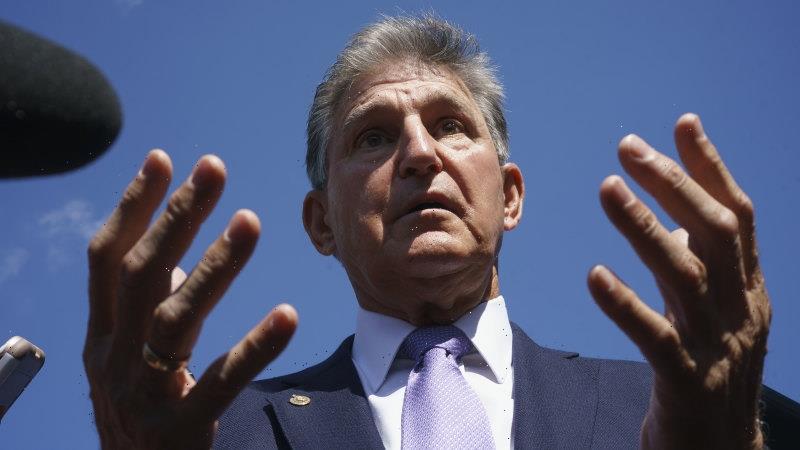 This month around the world those most engaged in the desperate fight to cut fossil fuel emissions in time to prevent the very worst impacts of global warming are watching one man: Joe Manchin, a Democratic senator for West Virginia. A coal man.

“What would you tell Manchin if you were sitting down with him today?” I asked the Australian climate scientist and physicist Bill Hare, a man who knows about as much as anyone about global climate politics. 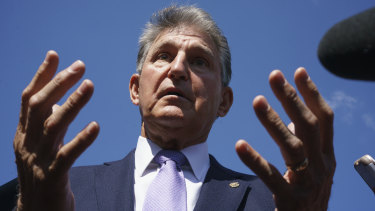 The whole world in his hands? Democratic Senator Joe Manchin has helped torpedo a centrepiece of the Democratic Party’s economic agenda.Credit:AP

“I’d tell him he has history in his hands,” says Hare.

The American political veteran John Podesta, a key counsellor over the years to Bill Clinton, Barack Obama and now Joe Biden and his climate envoy John Kerry, was more blunt in a recent Rolling Stone article.

If Joe Manchin does not cease his opposition to crucial climate policy now being championed by Biden, “we are all f—ed”.

Podesta was not talking about the Democratic Party, nor even the United States, but the world.

On Thursday, the leading climate scientist and advocate Michael Mann said he shared the view, telling the Herald and The Age the need to rapidly decarbonise was now so acute that the decisions made by individuals in power at present, and by Manchin specifically, could have profound implications on all of us.

To understand why Manchin’s position means so much you need to know a little about US politics, global climate politics, the so-called Build Back Better bill that Manchin is opposing, and the physics of climate change itself.

Manchin is a Democrat in a Senate that breaks 50/50. At present, Biden has 49 senate votes supporting the climate aspects of the Build Back Better bill, a package that is designed to help remake the American economy after COVID.

Though a stimulus package and infrastructure measure, Build Back Better is also the largest climate bill in US history: US$555 billion ($770 billion) is slated for renewable energy and clean transportation incentives over a decade. Those commitments are key to the US achieving its goal of cutting greenhouse gas emissions by 50 to 52 per cent on 2005 levels by 2030.

Hare, who has spent a career on the climate frontlines as advisor and lead author for the IPCC and chief executive of the advisory group Climate Analytics, points out that the US target is not only significant for the amount of warming pollution it would keep out of the sky, but for its diplomatic weight.

The international mechanism for dealing with climate change is based on consensus. It’s only real fuel is peer pressure. When heads of state and government meet at gatherings such as the recent Conference of Parties to the Paris Climate Accord in Glasgow they might be informed by scientists but their shared language is of political pain.

The system works – to the extent that it does – when countries make mutually reinforcing commitments to reduce emissions. It seizes up when some refuse to. (This point, more than the sheer tonnage of Australian greenhouse gas emissions, is the true cause of our condemnation on the world climate stage.)

Bluntly put, if Manchin blocks Build Back Better it gives license to China and India to slow their emission reduction efforts, Hare explains.

Before Christmas, Manchin appeared on Fox News to say he could not support BBB as it was drafted, prompting a writer for the Atlantic magazine to argue: “If that decision holds, then Manchin has virtually sealed the planet’s fate: the world is all but guaranteed to warm by more than 1.5 degrees Celsius above its pre-industrial temperature by 2040.”

Whether or not that is the case Hare sees a precedent for West Virginian coal interests hobbling global climate efforts.

In 1997 Congress passed what is known as the Byrd-Hagel Resolution, blocking the US from backing the Kyoto Protocol. The late Robert Byrd was a former Exalted Cyclops of the Ku Klux Klan who served as a Democratic senator for West Virginia for 51 years.

Hare believes the resolution, which was passed unanimously, gave cover to nations including India and Australia to refuse to back Kyoto and eventually contributed to the failure of the Copenhagen climate talks in 2009.

It cost the world a decade of climate action, he argues.

Manchin has long trodden a more conservative path than his Democratic peers, a tendency accepted by the party as it reflects the political culture of West Virginia, which he served as governor from 2005 before winning a senate seat in 2010.

But patience has worn thin with Manchin’s obstruction since President Biden beat Donald Trump in 2020 without a clear majority in the Senate, only to see his agenda stalled.

Today even the coal unions which once backed Manchin’s dedicated support of their industry have lost faith.

“We urge Senator Manchin to revisit his opposition to this legislation and work with his colleagues to pass something that will help keep coal miners working, and have a meaningful impact on our members, their families and their communities,” said United Mine Workers of America International President Cecil Roberts, a long-time ally of Manchin’s, in a statement four days before Christmas.

The union supports BBB for the various measures it includes to support new training and new industries in coal country.

So far Manchin remains unmoved, and his stance has prompted savage criticism from some Democrats and observers. 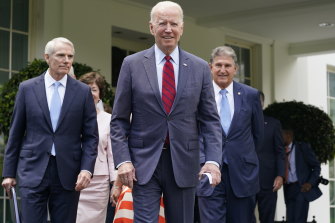 Stifling progress: US President Joe Biden (centre) with Joe Manchin (right). Manchin has long trodden a more conservative path than his Democratic peers, however patience is wearing thin even within the coal union.Credit:AP

Where once Manchin’s backing of the coal industry was read as political expediency, some are now seeing it as personal.

Many, including those quoted in the excoriating Rolling Stone profile, have noted that Manchin’s vast family fortune comes not from toiling in mines but from trading in energy produced by burning the dirtiest form of fuel used in the region, a coal waste product known as “gob”.

“West Virginians have been paying millions of dollars each year in higher electricity costs in order to keep running a dirty, inefficient power plant that is sickening and killing people with dirty air, but paying the Manchin family handsomely,” Rolling Stone reported.

Whether or not you accept their line, Mann and Hare agree that Manchin is slowing US and global climate action when scientists agree there is no time left to spare.

“There is no denying that Biden’s Build Back Better policy would make a considerable difference for climate action, just as reaching the Paris Agreement did and the most recent US election before it,” she says. “But is it the single and only answer to the challenge before us? No. Global momentum is moving in the right direction, it just needs to be moving a lot faster.”

Either way the climate world is watching Manchin this month as Biden struggles to break the impasses. Many in the Democratic Party would like to see the West Virginian strong-armed into passing the whole bill, including social spending initiatives to which Manchin remains implacably opposed.

Others hope Biden will break the bill up separating out the climate initiatives from the broader package in the hope Manchin might back them.

If he does, it will not please his allies in the industry, which is determined to survive in a world turning against it.

“It’s coal,” says Hare in a grimly pragmatic tone. “It’s what coal does.”