Afghan human rights advocates have condemned the federal government’s “insulting” pledge to resettle 15,000 refugees from the war-ravaged country through Australia’s existing humanitarian channels over four years, as they renewed calls for a special intake similar to that made to Syrian refugees in 2015.

Immigration Minister Alex Hawke announced the commitment on Friday hours after a Senate committee delivered a report scathing of the government’s failure to evacuate many interpreters and other locals who helped the Australian Defence Force before Kabul fell to the Taliban last year. 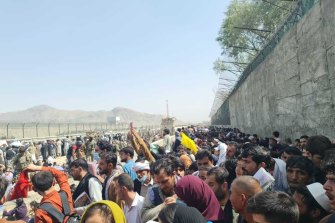 Barat Ali Batoor, a photographer who fled Afghanistan in 2012 and now lives in Victoria, said the announcement was “insulting and disappointing” and was an attempt to distract from the Senate inquiry’s findings.

“Those who have helped us have been left to the mercy of the Taliban and many of them are facing heavy consequences for their support to the Australian troops,” Mr Batoor, an organiser at the Asylum Seeker Resource Centre, said.

Arif Hussein, an Afghan-Australian and lawyer at the Refugee Advice and Casework Service, said the Australian government was failing its moral obligation to support the Afghan people.

“This announcement doesn’t even begin to recognise the relationship that we had to the war – we spent 20 years there, lives were lost there – the promises we made to the Afghan people and the escalating humanitarian crisis that the people of Afghanistan face right now,” Mr Hussein said.

He said the allocation of 15,000 places over four years paled in comparison to the 145,000 Afghan nationals the Department of Home Affairs said were seeking resettlement through the Humanitarian program.

In 2015, Australia initiated a special program to resettle 12,000 extra refugees from Syria and Iraq as hundreds of thousands of people fled the civil war and the brutal rampage of ISIS terrorist forces. The Afghanistan-Australia Advocacy Network is among the advocacy groups calling for a one-off special intake of 20,000 humanitarian visa holders from Afghanistan, in addition to Australia’s existing annual cap of 13,750 places.

Mr Hawke’s announcement will instead see 15,000 places allocated for Afghan nationals through existing channels over four years, comprising 10,000 through the humanitarian stream and 5000 visas within the family stream. He said the commitment was a “floor and not a ceiling” and the government reserved the right to increase the program in future years.

Zaki Haidari, a refugee who is in Australia on a temporary protection visa, said the government was “playing with numbers” while many left behind in Afghanistan faced a life and death situation.

“It’s a very disappointing announcement for us to hear,” Mr Hairdari said. “We have to act now to save lives. The longer we wait, the more people we lose.”

Over nine days in August last year as Kabul fell to the Taliban, Australia rescued 4168 people, including 167 Australian citizens and 2984 Afghans with approved visas. But the Senate inquiry found bureaucratic delays meant many Afghan nationals who supported Australian troops did not secure visas in time, with the report stating: “We have left them standing in harm’s way. It is dishonourable.”

Mr Batoor said Australia was far behind its coalition partners when it came to providing support to Afghanistan since the fall of Kabul.

Canada has committed to taking 40,000 additional Afghan refugees, while Britain has announced a program for Afghan refugees with 5000 initial places and up to 20,000 places over the longer term. The US aims to accept 125,000 Afghan refugees this financial year.