After joining the standing ovation for Decadance, the work controversially sponsored by the Israeli embassy, the minister posted on social media that he had significant concerns “about trying to shut down specific creative voices simply on account of their nationality”. 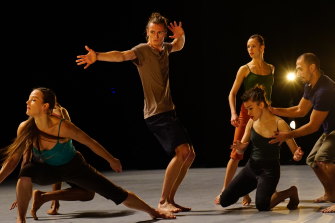 “Imposing censorship of this kind risks silencing important messages from a broad range of perspectives.”

A total of 27 events have now been withdrawn from the festival since the boycott was announced in November, according to boycott organisers. Ten artists have pulled out of events that are still proceeding and more withdrawals are expected.

The boycott has grown in recent days to include comedian Judith Lucy, and Maeve Marsden, the director of Lizzie, the musical to be performed at the Hayes Theatre.

Having wrestled with her decision, Lucy said she was mystified by the behaviour of the Sydney Festival board “particularly their sponsorship deal with the Israeli embassy but also leaving their artists in the shit”. 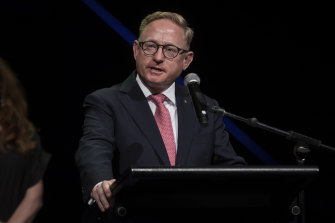 Offering an apology to disappointed ticket holders Lucy said artists would be condemned whatever position they took.

In a statement, Marsden said that as a non-political organisation the festival had “erred beyond measure in partnering with the State of Israel” and using money earmarked for culture to cover up “grave violations of international law”.

But the board of Hayes Theatre, Marsden said, had refused her request that Lizzie, a gothic take on the life of Lizzie Borden, be withdrawn from the festival program.

The boycott centres on the festival’s acceptance of $20,000 from the Israel Embassy in Canberra to stage Sydney Dance Company’s production of Decadance, a work created by the Israeli choreographer Ohad Naharin and Tel Aviv’s Batsheva Dance Company.

“It was an extraordinary work, I’ve never seen anything quite like it. It was raw, passionate and visceral and deeply moving,” Mr Franklin told this masthead on Monday.

“I get saddened that this issue has overshadowed this extraordinary work by a choreographer who is known to be an opponent of many of the government of Israel’s policies with regard to the Palestinian people.”

“It normalises human rights abuses and it allows Israel to gain publicity out of a cultural institution. The actual event itself, Decadance, the dancers, performers, and choreographer, none of that is at issue here.”

Kiss band member Gene Simmons, Oscar-winning producer Emile Sherman and singer Deborah Conway have signed an open letter that labelled the boycott divisive and “an affront to both Palestinians and Israelis”.

Mr Franklin, a member of the Nationals, replaced Don Harwin in the latest Cabinet reshuffle.

He said arts had been smashed by the pandemic and now was the time to give artists every opportunity to put themselves in front of audiences again.

“The arts should allow truth-telling and hold up an honest raw mirror to society and sometimes to government as well. I don’t ever want to be prescriptive about what creatives should do,” he said.

“I think it is important that they feel the freedom of expression to be able to say and define the issues they are concerned about in their personal experience or broader society.”

But Ali said no one had questioned Don Bradman’s decision not to tour South Africa during Apartheid. Well wishes, he said, were not enough to change the circumstances of the Palestinian people.“I put the question to the minister: what are the Palestinians supposed to do to end this apartheid situation?”