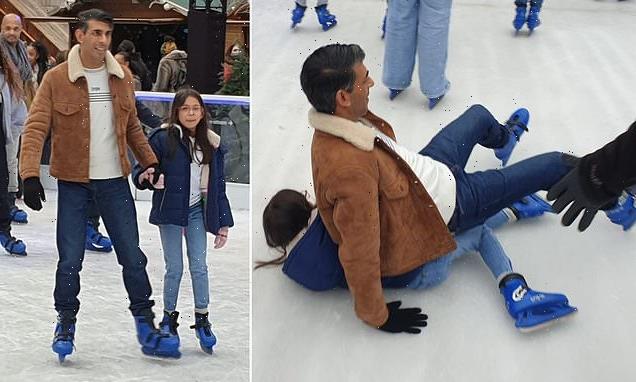 Heading for another CRASH, Rishi? Chancellor takes a tumble on the ice while skating with daughter outside Natural History Museum

His dapper dress sense and suave charm has led some to label him ‘Dishy Rishi’.

But the chancellor showed that he isn’t immune to the occasional gaffe after he was pictured taking a heavy tumble at an ice rink.

To make matters worse, his fall was cushioned by his own daughter, with Mr Sunak, 41, landing on top of the unfortunate young girl while on a family day out at the Natural History Museum in London.

The chancellor, who is father to Krishna and Anoushka, was dressed in jeans and a casual jacket and held the girl’s hand as they moved around the rink.

However, he later lost his balance and landed on top of her, to the shock of dozens of onlookers. It is unclear which daughter was involved in the unfortunate fall. 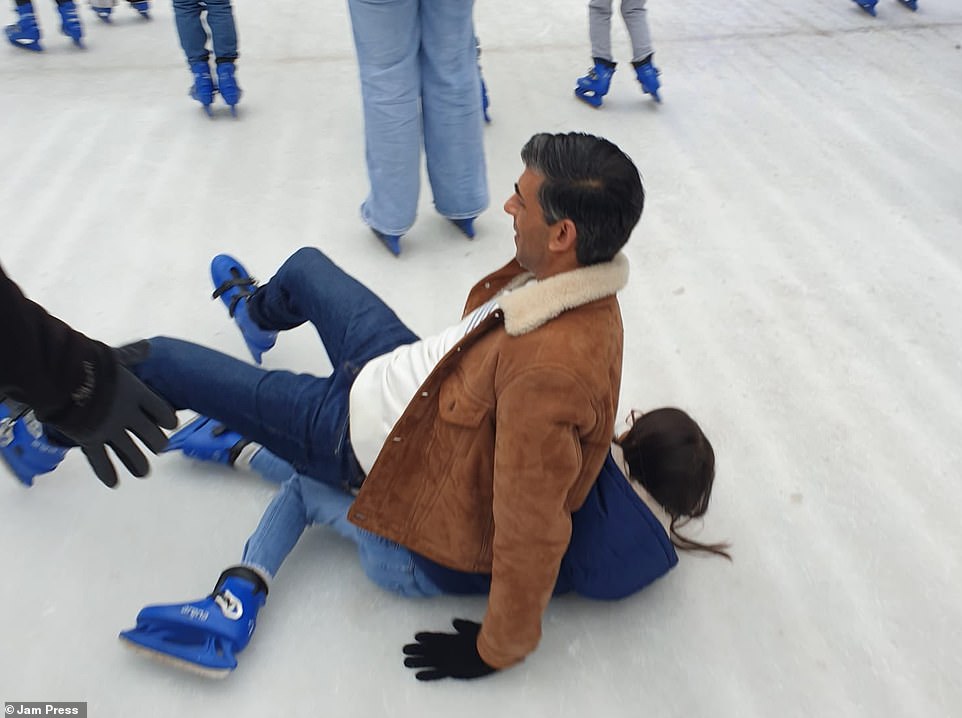 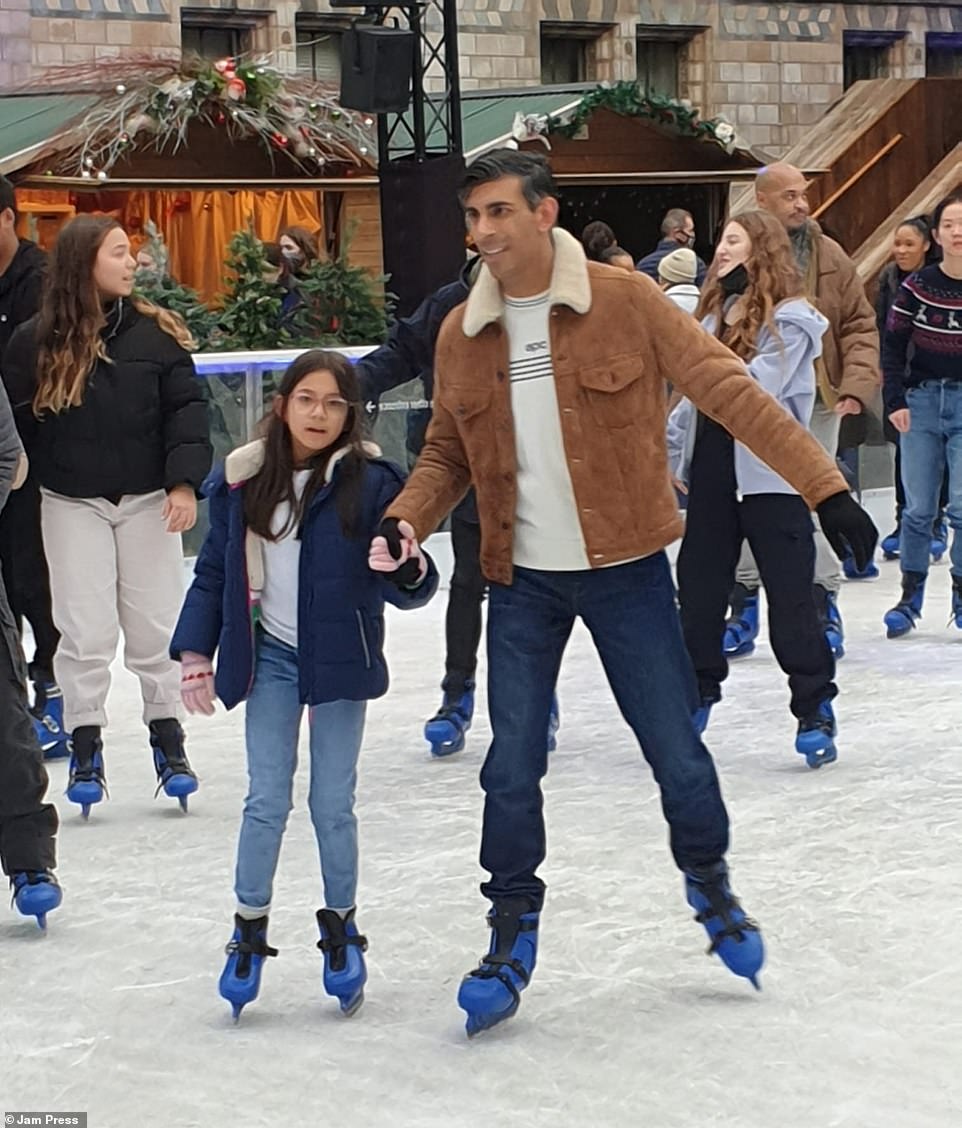 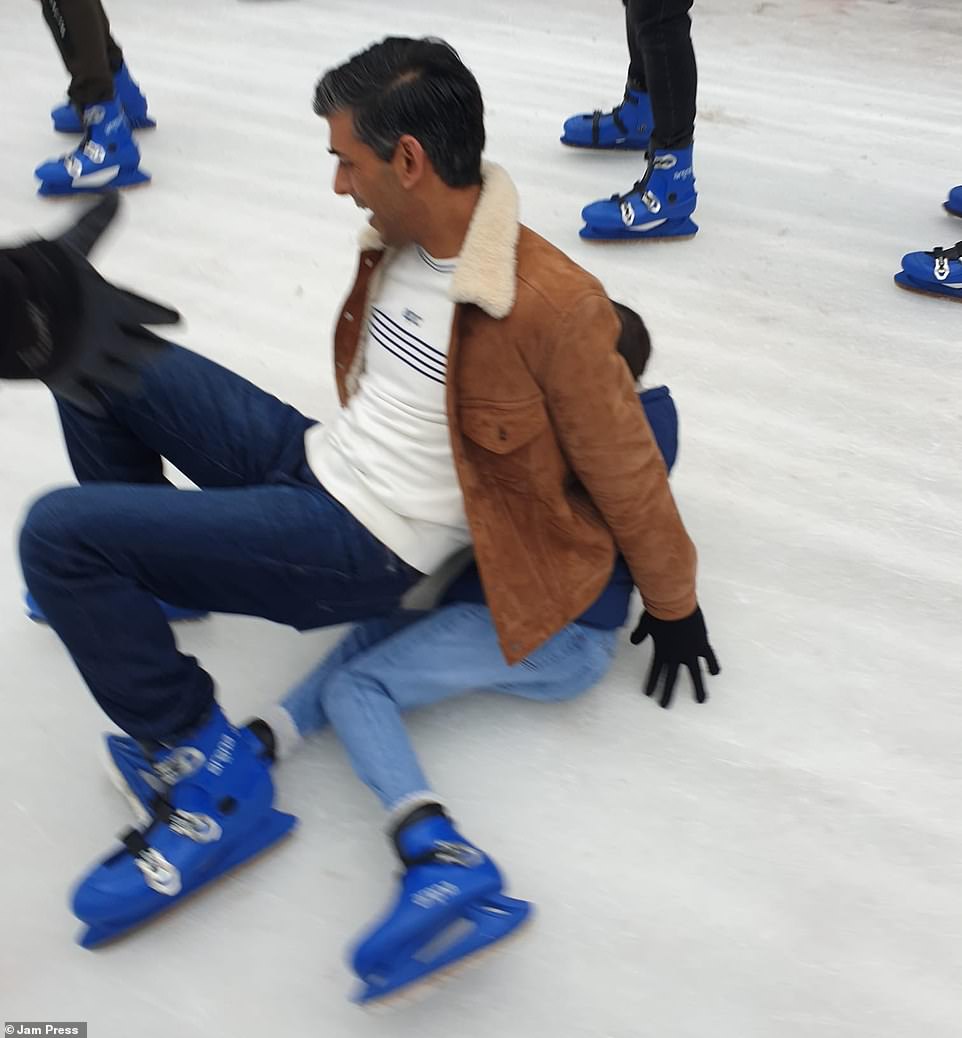 The onlooker, Maddie 28, a communications officer from London, said: ‘He was skating for ten minutes before he staggered and dragged her down’ 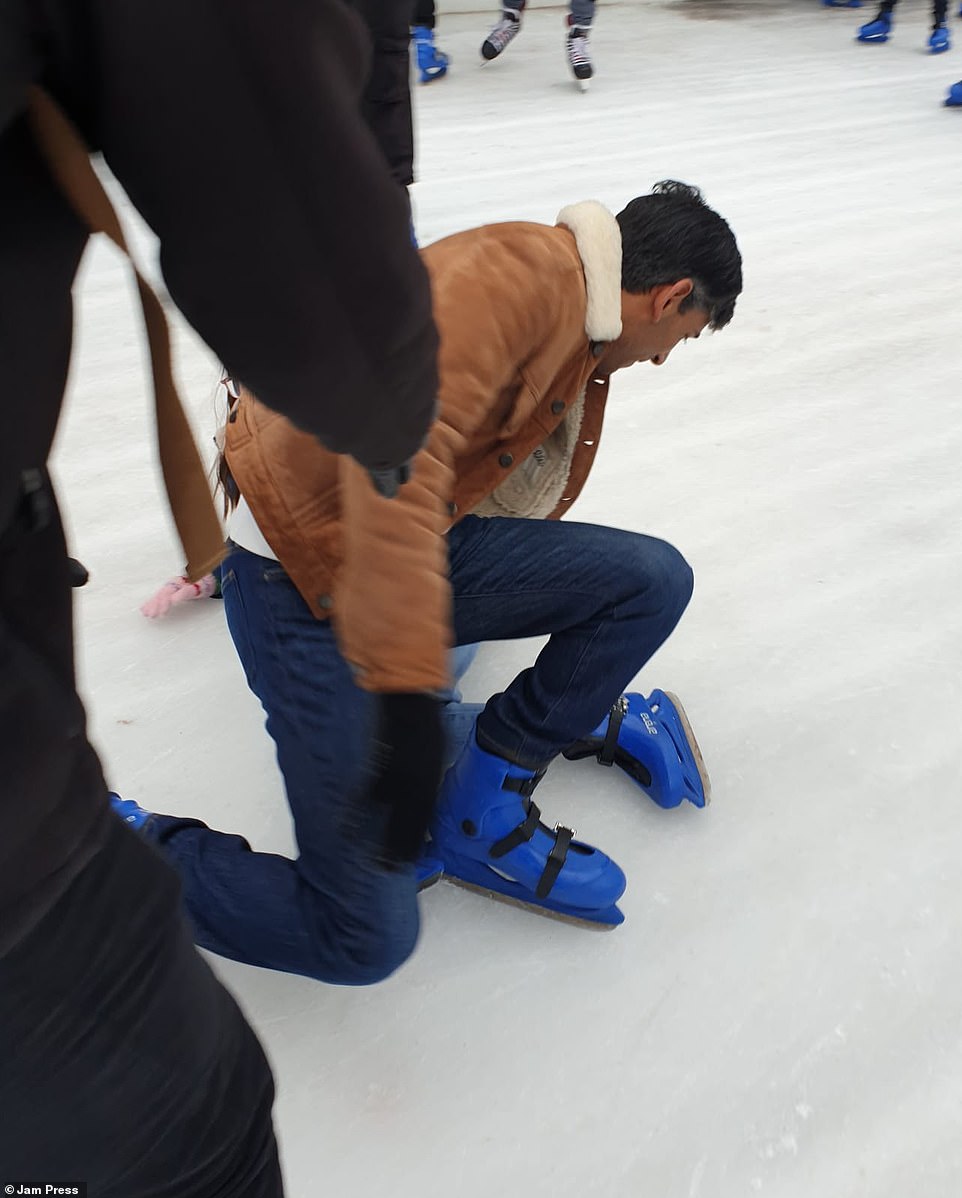 Fellow skater Maddie 28, a communications officer from London, was with her boyfriend James, 29, when she snapped the images around 2.25pm this afternoon.

She said: ‘He landed on his kid and James offered to help him up and he totally blanked him.

‘He was skating for ten minutes before he staggered and dragged her down.

‘People were all looking and had previously been taking pics.’

According to Maddie, he was down for about ten seconds before he climbed back to his feet.

Mr Sunak got back on his skates and was soon taking selfies with shocked onlookers.

The chancellor shares his daughters with wife Akshata Murthy, whose families assets make her one of the richest women in Britain.

Akshata Murthy and her relatives hold a multimillion pound portfolio of shareholdings which have come to light amid questions over the Chancellor, who met his future wife while studying at Stanford University, California, failing to declare them in the register of ministers’ interests.

The assets make Indian-born Akshata richer than the Queen, who is estimated to be worth £350million, according to the Sunday Times Rich List.

She is the daughter of one of the richest men in India – billionaire N. R. Narayana Murthy – who has been described as the father of the Indian IT sector and ‘one of the 12 greatest businessmen of all time’.

Sunak is the son of a GP father and pharmacist mother who emigrated to Southampton from East Africa in the 1960s, and he studied at Oxford University before winning a Fulbright scholarship to Stanford where the future husband and wife met.

Sunak’s wife is the daughter of an entrepreneur in India, co-founding technology company Infosys – in which she owns 0.91 per cent shares, totalling £430million.

Her family are also have a joint venture with Amazon worth £900million a year and shares in the firm running Jamie Oliver’s Jamie’s Italian and burger chain Wendy’s in India.

Before becoming Chancellor, Sunak was better known in India than he was in Britain, after he became a household name when he married Akshata, the daughter of a self-made billionaire.

Akshata’s father is the 51st richest man in India and ranks at 1135 in the world’s billionaire list, according to Forbes.

The father-of-two from Bangalore, India, graduated with a science Master’s degree from the Indian Institute of Technology before becoming the co-founder and chairman of Infosys.

The tech giant was worth around £2billion when Southampton-born Sunak travelled on a Fulbright scholarship to Stanford University in California, where he met his future wife after taking Philosophy, Politics and Economics at Oxford.

It is today valued at around £33.3billion, with Mr Murphy’s real-time net worth estimated at around £2.3billion ($3.1bn) at the time of writing.

According to his company profile, Mr Murthy, whose wife, Sudha, works as an author, is currently on the boards of Ford Foundation, the Institute for Advanced Study in New Jersey and the United Nations Foundation.

He has also served on the boards of Cornell University, Wharton School, the Graduate School of Business at Stanford University and the Rhodes Trust at Oxford, alongside Yale University’s international advisory board.

On its website, Infosys says that Mr Murthy ‘introduced the concept of the 24-hour work day to the world’.

It states: ‘Mr Murthy conceptualized, articulated and implemented the Global Delivery Model (GDM) which has become the backbone of the Indian software industry.

‘GDM is based on collaborative distributed software development principles and has resulted in the delivery of superior quality software to global customers delivered on time and within budget. Mr Murthy also introduced the concept of the 24-hour work day to the world. 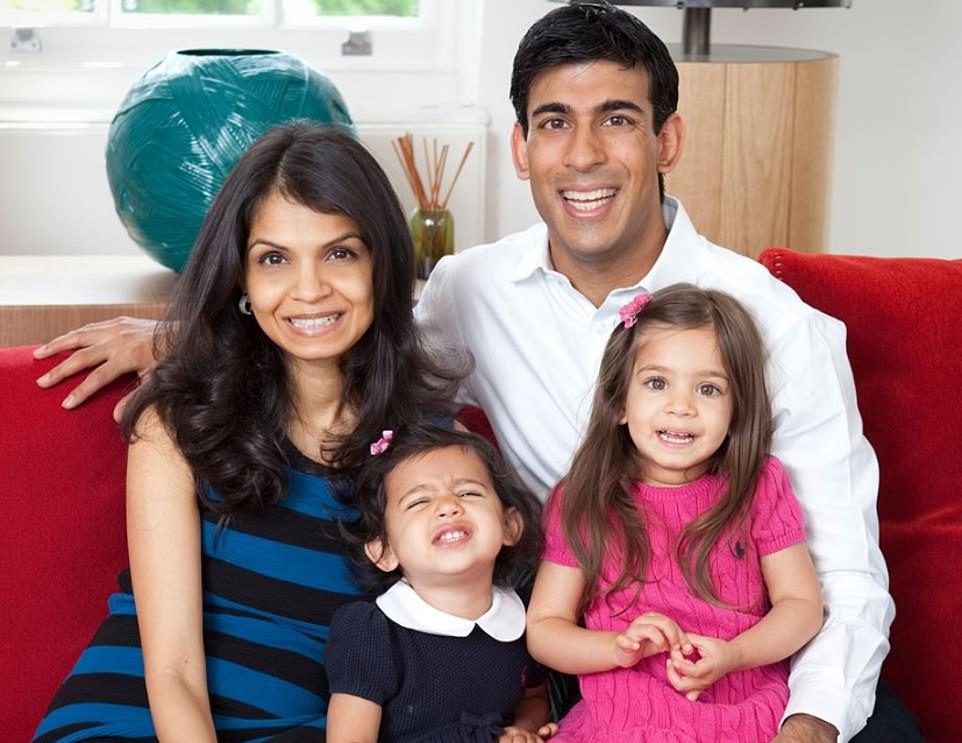 The chancellor shares his daughters with wife Akshata Murthy, whose families assets make her one of the richest women in Britain. Pictured: Sunak with his wife, Akshata, and their children Krishna and Anoushka 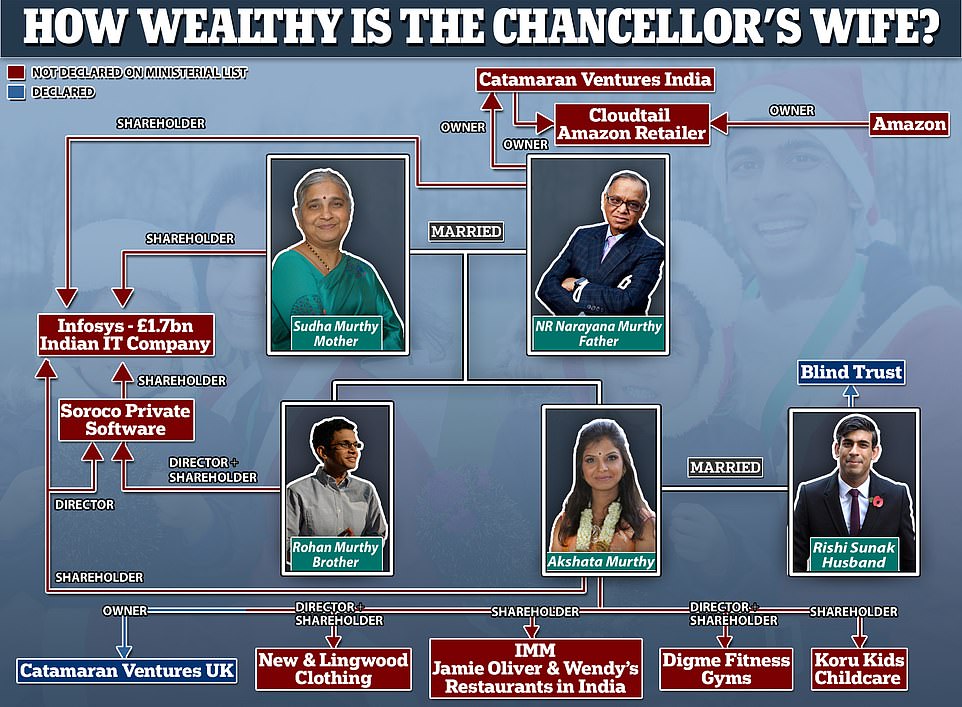 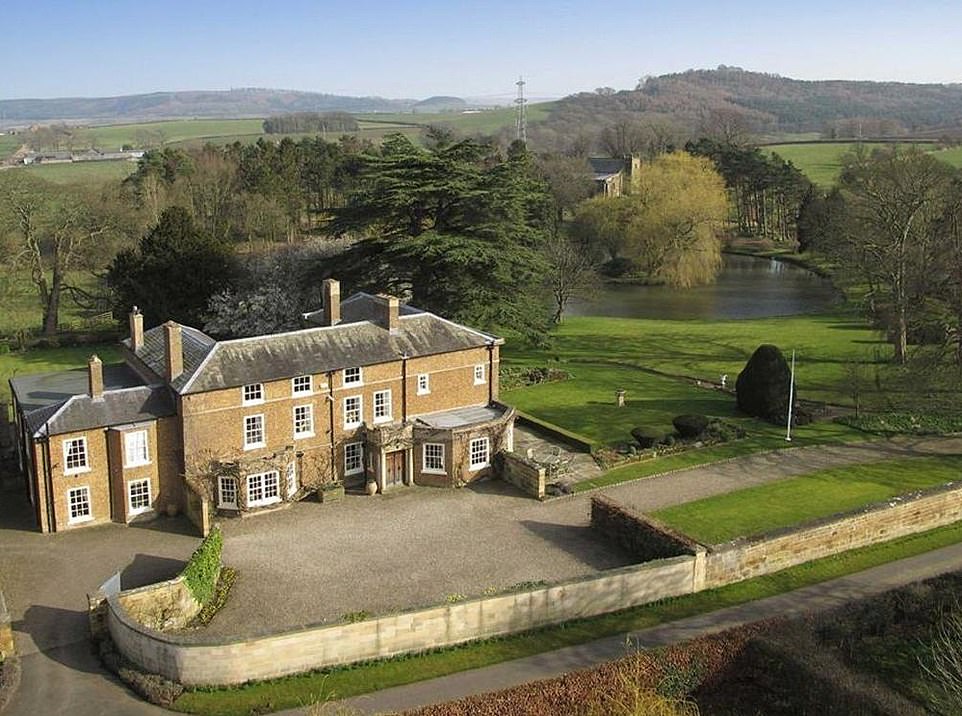 Sunak is locally he is dubbed the ‘Maharaja of the Dales’ (pictured, their magnificent Georgian manor in North Yorkshire) 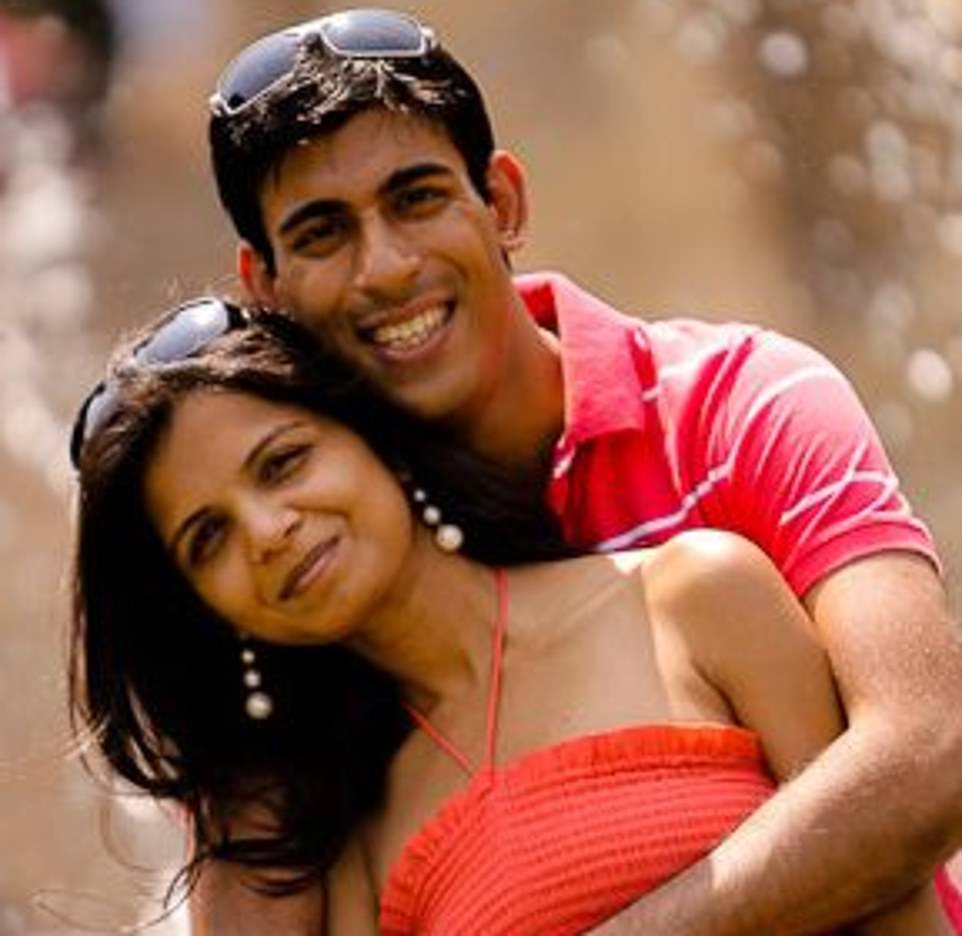 Rishi Sunak, pictured with his wife Akshata Murthy, was better known in India than Britain before he became Chancellor 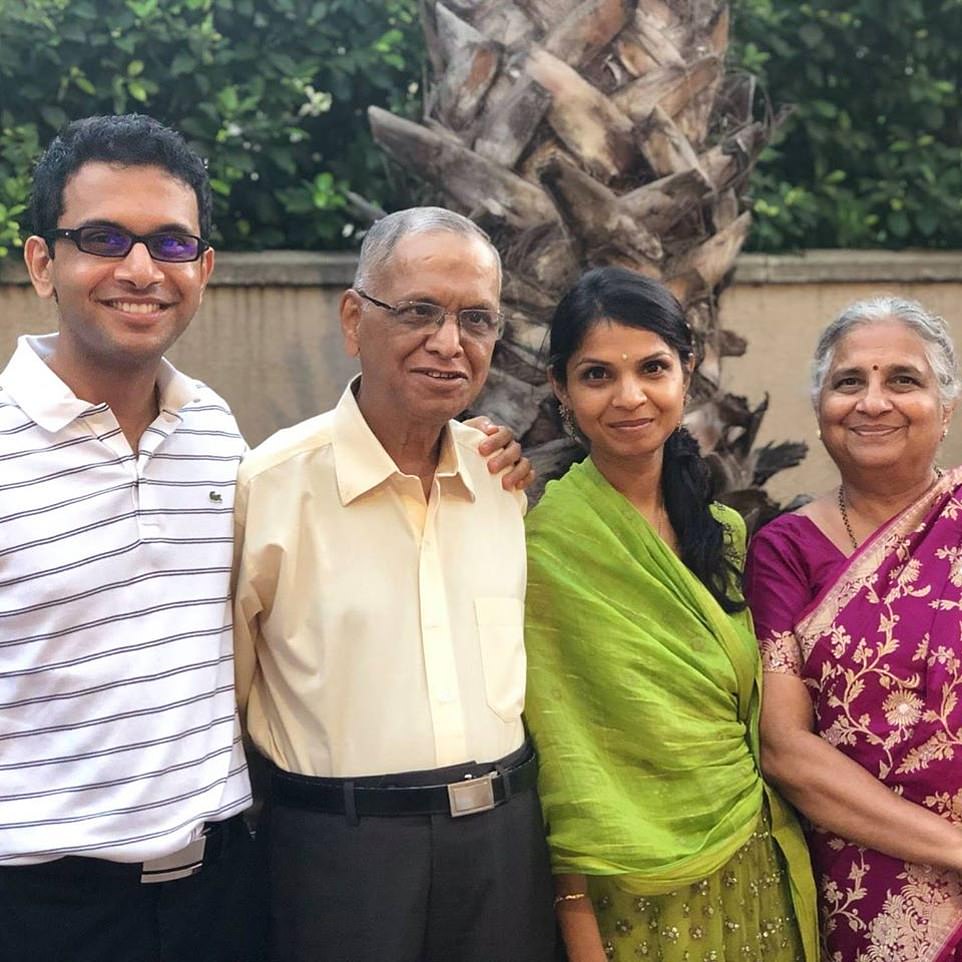 After taking a first in Philosophy, Politics and Economics at Oxford, Southampton-born Sunak travelled on a Fulbright scholarship to Stanford University in California where met his future wife (pictured with her family, second from right)

Sunak and Akshata married in 2009 in her home city of Bangalore in a two-day ceremony attended by 1,000 guests.

Before entering politics, Mr Sunak, who is now a multi-millionaire in his own right, studied at the £42,000-per-year Winchester College and later at Oxford University.

During his time in business, he worked in California, India and Britain for various investment firms including Goldman Sachs.

He later set up his own business, Theleme Partners, in 2010 with an initial fund of £536million.

While building the hedge fund he spent a couple of days doing voluntary work for the Conservatives – which was when he decided he would like to go into politics full-time.

Speaking about his decision to go into politics, he once explained: ‘It was my parents who motivated me, but not in a political way.

‘My dad was a GP, my mum a pharmacist, and I grew up working in their surgery; in the pharmacy; delivering medicines to people who couldn’t pick them up.

‘People would always stop and talk to me about my mum and dad, saying, ‘Oh, you’re Mrs Sunak’s son, Dr Sunak’s son.’ And then they’d have some story about how my parents had helped them, or their parents, or children, and I thought that was amazing.

‘They had done the same job in the same place for 30 years, and it was clear that they as individuals were able to have an amazing impact on the community around us, and that I found pretty inspiring. And that was my motivation for becoming an MP.’

Every year Sunak and his wife throw a summer garden party for local villagers at their magnificent Georgian £1.5million manor house in Kirby Sigston, just outside Northallerton, Yorkshire – leading to him being dubbed the ‘Maharaja of the Dales’.

Sir Alistair Graham, a former chairman of the committee on standards in public life, said the Chancellor appeared to have ‘taken the most minimalist approach possible’ to divulging information.

He told The Guardian: ‘Perhaps Rishi Sunak should carefully read the ‘Seven principles of Public Life’ to make sure he is fulfilling the two principles of ‘Honesty and Leadership’.’

But a Treasury spokesman said Mr Sunak had ‘followed the ministerial code to the letter in his declaration of interests’.

It follows Mr Sunak facing demands to reveal details of his financial interests last month, after it emerged he set up a ‘blind trust’ on becoming a minister.

The Chancellor deployed the arrangement, meaning that he does not know how his assets are being invested, when he was made Chief Secretary to the Treasury in July last year. 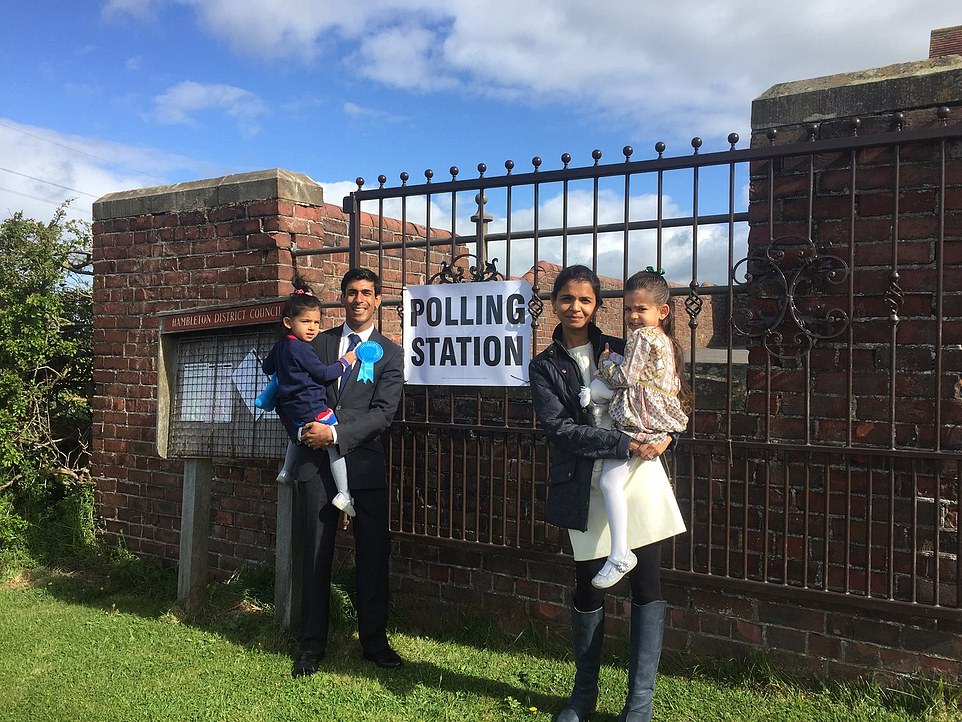 By setting up the ‘blind trust’ it means he does not have to disclose fuller details of his investment portfolio. Pictured: Sunak with his wife and children during the recent election 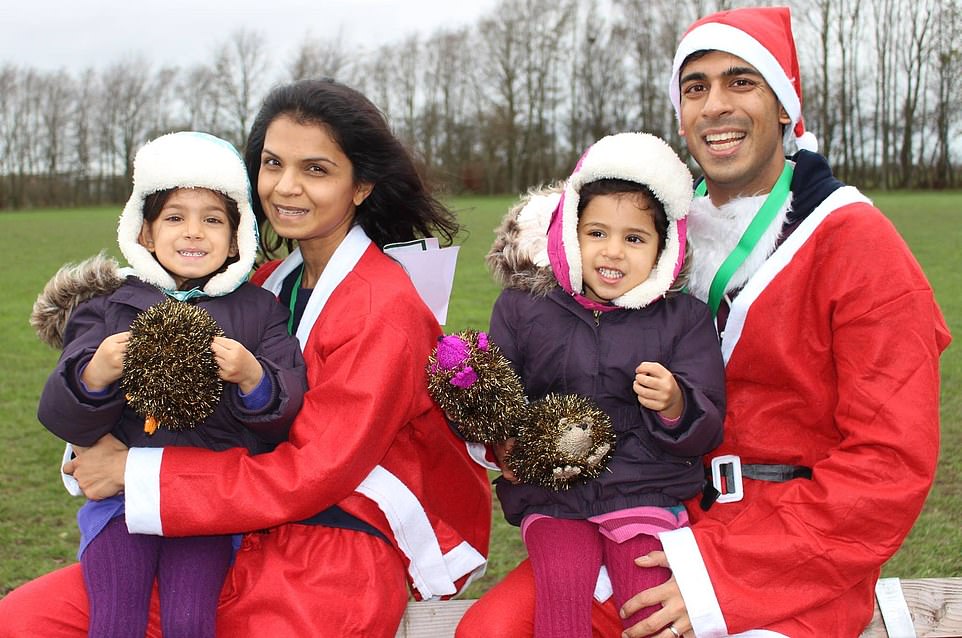 The Chancellor of the Exchequer is pictured with his wife, Akshata, and their two children during a Santa run 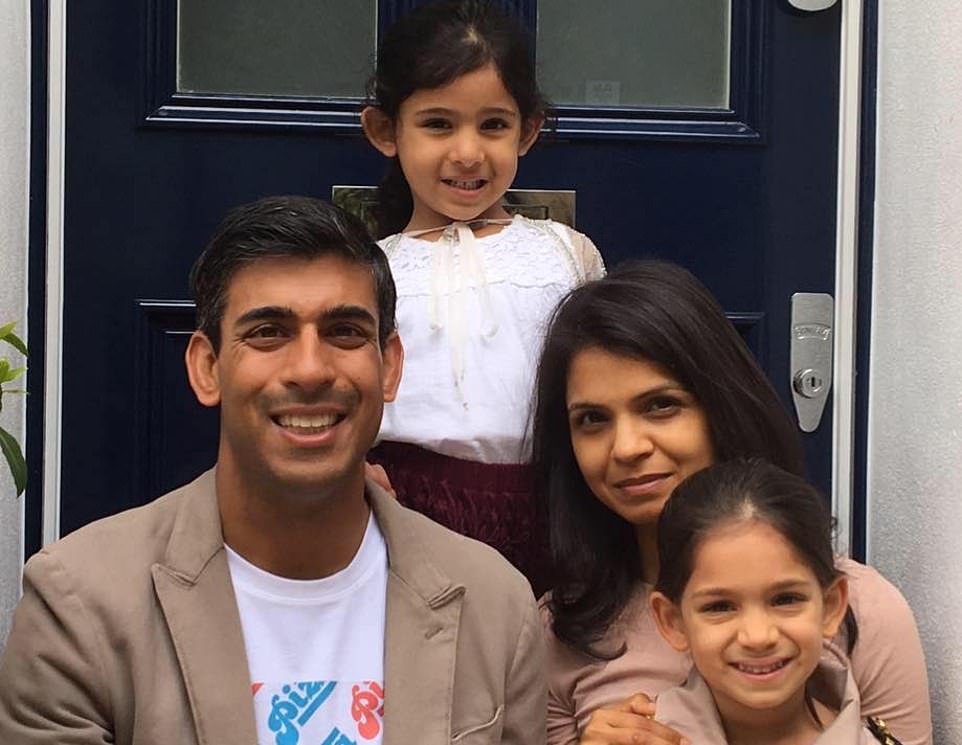 The couple married in 2009 in her home city of Bangalore in a two-day ceremony attended by 1,000 guests 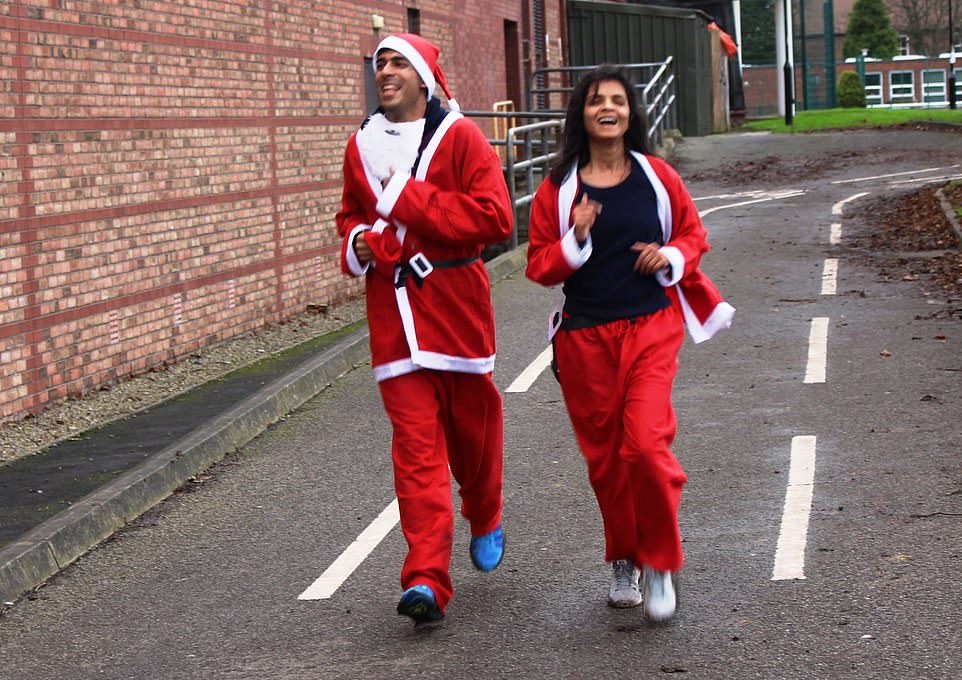 Before entering politics, Mr Sunak, who is now a multi-millionaire in his own right and a graduate of £42,000-per-year Winchester College and Oxford University

But critics said there was still risk of conflict as Mr Sunak – reputed to be the richest MP – is aware what he put into the trust.

It also means he does not have to disclose fuller details of his investment portfolio. The presence of the trust was revealed in the latest register of ministerial interests.

It came as other official documents revealed that he did not take his salary for five months when he joined the Treasury last year. He waived the £34,000 top up to his MP’s salary until just before Christmas.

Theresa May also attracted controversy as she made a similar move when she became Prime Minister in 2016.

And in the mid-1990s the Tories attacked Tony Blair as it emerged he used a blind trust, when leader of the opposition, to fund his office.

Former standards tsar Sir Alex Allan, who quit his role last week after Boris Johnson overruled his conclusion that the Home Secretary Priti Patel breached the ministerial code, is said to have signed off on Sunak’s disclosures.