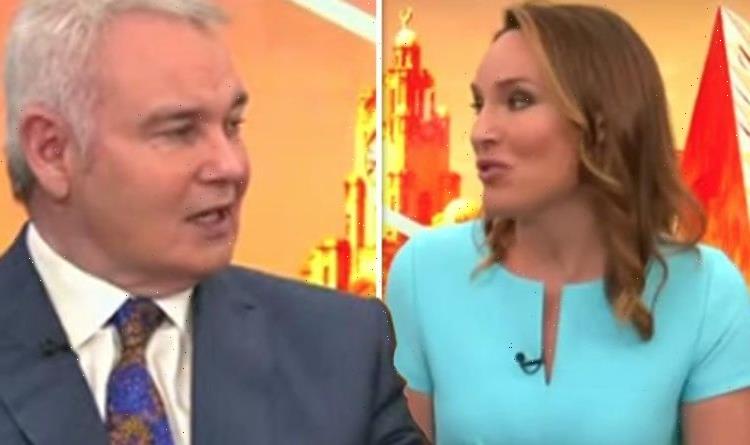 Eamonn Holmes and Isabel Webster co-hosted their first GB News Breakfast show on Monday as the former Sky News anchors reunited. However, Eamonn was quick to hit out at Isabel when she admitted she had let off fireworks at home on New Year’s Eve as he shared his thoughts on how loud noises impact animals.

The former This Morning presenter began: “I’ll tell you what got on my nerves on New Year’s Eve, fireworks and pets.”

“Guilty,” Isabel remarked. “I set off some fireworks.”

“If you could see my little doggy’s face you wouldn’t have set those off,” Eamonn replied.

“Don’t say that if you could see my children’s faces, they love those fireworks,” she hit back.

“If your children could see what my doggy’s face was like they wouldn’t be letting off the fireworks,” Eamonn quipped.

“I’m all for organised fireworks but why do we sell people incendiary devices.”

After detailing the morning’s headlines, Eamonn continued to explain his dislike of fireworks.

The presenter explained he had shared his frustration about fireworks with his Twitter followers over the weekend.

He joked his wife Ruth Langford was keen for the couple to go out to celebrate New Year’s Eve but fears about their dog’s safety stopped them.

His tweet read: “Can’t go out tonight because I fear our beautiful dog is about to [have] a heart attack because of awful fireworks going off.

“[Are you] worried about the effects on your pet, farm animals, on wildlife?”

Tom Clayton shared: “I’m torn. Get why we have them but kills me to see my dog shivering in a corner not having the courage to drink or eat for a week in November and on NYE.

“I’m worried if it has any long time effects but wouldn’t call for a total ban. I think commercial use, yes, residential, no.”

However, Tim Reynolds disagreed: “Fireworks do not frighten all pets! I had two little rescue dogs live with me for 11 years and they were not bothered by fireworks going off close by.

Get the latest three-day weather forecast where you live. Find out by adding your postcode or visit InYourArea

“If your pets are affected turn up the radio or TV set up loud to lessen the effect I suggest.”

Eamonn quipped: “You can suggest all you like Tim but good for you that your animals aren’t affected.

“Not every animal is affected that has to be said but I can tell you there are lots of things you can do, you can put on these thunder jackets, you can turn up the music.”

Breakfast with Eamonn & Isabel airs on GB News on weekdays at 6am.