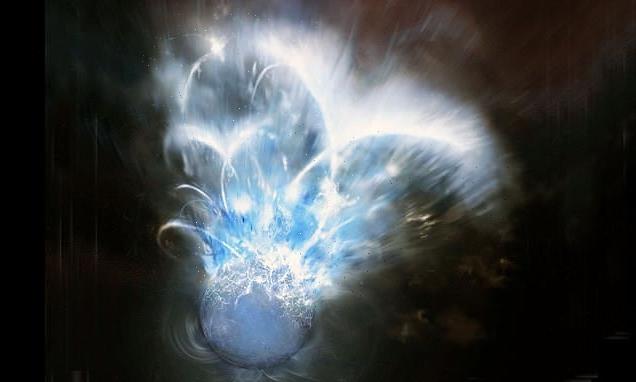 A magnetar star has been spotted violently erupting and ejecting as much energy as one billion suns within a tenth of a second.

The star, which has been dubbed a ‘cosmic monster’, is roughly 13 million light years away in the Sculptor group of galaxies.

During the eruption, the magnetar released the energy equivalent to that produced by the Sun in 100,000 years, according to researchers led by the University of Valencia.

Professor Victor Reglero, co-author of the study, said: ‘The explosion of the magnetar, which lasted approximately one tenth of a second, was discovered on April 15, 2020 in the midst of the pandemic. A true cosmic monster!’ 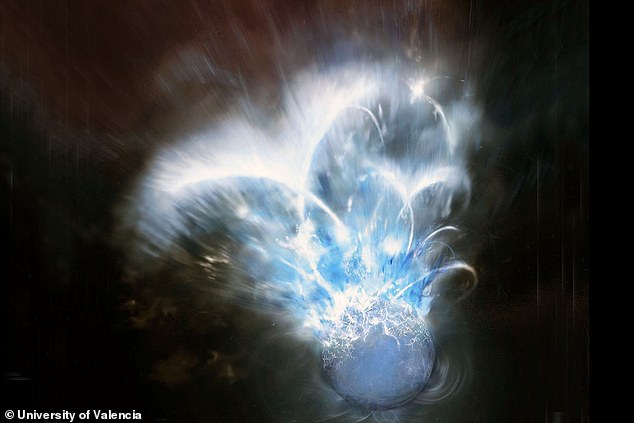 What is a magnetar?

Magnetars are a type of neutron star, an incredibly dense object mainly made up of tightly packed neutron, which forms from the collapsed core of a massive star during a supernova.

What sets magnetars apart from other neutron stars is that they also have the most powerful known magnetic fields in the universe.

For context, the strength of our planet’s magnetic field has a value of about one Gauss, while a refrigerator magnet measures about 100 Gauss.

Magnetars, on the other hand, have magnetic fields of about a million billion Gauss. If a magnetar was located a sixth of the way to the Moon (about 40,000 miles), it would wipe the data from all of the credit cards on Earth.

Magnetars are a subcategory of neutron stars – objects that can contain up to half a million times the mass of Earth in a diameter of just 12.4 miles – with extremely intense magnetic fields.

The objects suffer violent eruptions, but as these last just a fraction of a second, it has been difficult to detect and study them.

In the new study, researchers used the AIM instrument on board the International Space Station to study oscillations in the brightness of a magnetar called GRB2001415.

This technique allowed the team to record the intensity and duration of the magnetar’s eruption.

‘Even in an inactive state, magnetars can be one hundred thousand times more luminous than our Sun, but in the case of the flash that we have studied – the GRB2001415 – the energy released is equivalent to that radiated by our Sun in one hundred thousand years,’ said Alberto J. Castro-Tirado, who led the study.

While the reason for these eruptions remains unclear, the researchers suspect that they may be due to instabilities in the stars’ magnetosphere, or due to a kind of ‘earthquake’ in their crust.

Mr Castro-Tirado added: ‘Regardless of the trigger, in the magnetosphere of the star a type of waves is created – the Alfvén – that are well known in the Sun and that interact with each other, dissipating energy.’

During their analysis of the eruption’s oscillations, the researchers found that the pulses produced were consistent with the emission produced between Alfven waves, whose energy is quickly absorbed by the crust.

This means that the entire magnetic process lasts just 3.5 milliseconds, according to the researchers.

Professor Reglero said: ‘The difficulty lies in the brevity of the signal, whose amplitude rapidly decays and becomes embedded in background noise. And, as it is a correlated noise, it is difficult to distinguish its signal.’

Just 30 magnetars are known to exist, and while eruptions have previously been detected in two, GRB2001415 is the most distant yet.

‘Seen in perspective, it has been as if the magnetar wanted to indicate its existence to us from its cosmic solitude, singing in the kHz with the force of a Pavarotti of a billion suns’, Professor Reglero added.

The researchers hope the eruption will help to improve our understanding of how neutron stars respond to magenetic stresses.

The findings could also pave the way to a better understanding of fast radio bursts – one of the most enigmatic phenomena in astronomy, according to the team.

WHAT ARE NEUTRON STARS?

Neutron stars are the collapsed, burnt-out cores of dead stars.

When large stars reach the end of their lives, their core will collapse, blowing off the outer layers of the star.

This leaves an extremely dense object known as a neutron star, which squashes more mass than is contained in the sun into the size of a city.

A neutron star typically would have a mass that’s perhaps half-a-million times the mass of the Earth, but they’re only about 20 kilometres (12 miles) across.

A handful of material from this star would weigh as much as Mount Everest.

They are very hot, perhaps a million degrees, highly radioactive, and have incredibly intense magnetic fields.

This makes them arguably the most hostile environments in the Universe today, according to Professor Patrick Sutton, head of Cardiff University’s gravitational physics department.

The dense objects, in particular their cores, are key to our understanding of the universe’s heavy elements.