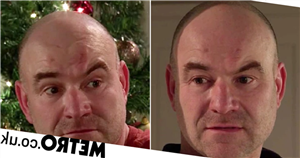 A trip to the hospital troubled Tim Metcalfe (Joe Duttine) quite a lot in tonight’s Coronation Street.

Tim’s day started off pretty normally. He was busy writing a shopping list for Sally (Sally Dynevor) ahead of their New Year’s Eve celebrations.

But when learner driver Faye (Ellie Leach) offered to drive him to the supermarket, his day dramatically changed.

Returning home, Tim tried to get out of the car, only to have his hand accidentally jammed in the door by Faye.

Initially reluctant to allow Emma (Alexandra Mardell) and Faye to go with him, Tim agreed to their suggestion of driving him to the hospital.

After facing the appointment on his own, Tim returned to tell Sal his hand was just badly bruised.

As Faye left the shopping in the car, most of her drinks and snacks had either melted (choc ices? In Winter?!) or weren’t as chilled as she had liked.

Later on, Faye made her way into town for a party, leaving Tim distant, troubled by the fact he never embraced life when he was Faye’s age.

After an evening at the pub, Sally and Tim returned home.

Feeling down, Tim told Sally that he’s scared one of them may die given their past health issues (Tim has suffered a heart attack, Sally has battled cancer), and all he wants is to just be happy and healthy.

‘Could do better’, was the phrase Sally’s teachers used on her school report.

With that in her mind, Sally told her husband they’ll do better in 2022 in order to live a healthier life.

It was quite the day for Tim Metcalfe, but is this episode foreshadowing a new storyline for him?

Scared of dying – could Tim face the prospect he may die if his health takes another turn?