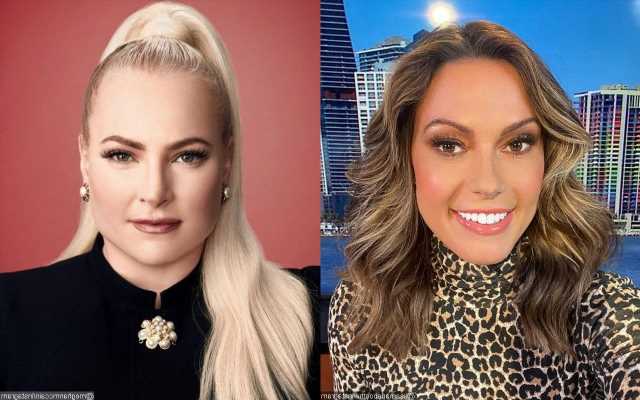 The conservative TV personality was in talks with ABC News executives about the open position on the show earlier this year, but the negotiations fell through over her COVID-19 vaccine stance.

AceShowbiz –Lisa Marie Boothe was close to join the co-hosts on “The View“. The Fox News host was reportedly set to take over Meghan McCain‘s spot on the talk show, but she refused to get the COVID-19 vaccine.

According to Daily Mail, the conservative TV personality was in talks with ABC News executives about the open position on the show earlier this year. However, the negotiations fell through after she made it clear that she didn’t want to get vaccinated.

ABC News’ parent company, Disney, requires all employees working there to be vaccinated. They decided to stop considering her for the job after Lisa informed them of her anti-vax decision.

An insider shared that their conversation with Boothe became a “moot point.” The report further noted that while Lisa was lined up for the gig, she was never officially offered the possession. The network also had other conservative candidates which executives have had their eyes on.

The show’s honchos allegedly are desperately scrambling to find a Republican co-host to fill Meghan’s position. The report added that the bosses want to have someone who can handle other liberal co-hosts, Joy Behar, Whoopi Goldberg and Sunny Hostin.

Meghan exited the show in August. In her final speech, Meghan said, “Thank you all so much, again, for the privilege and honor it has been for the past four years to work on this show. It really has been incredible. It will be on, you know, it’ll be referenced in everything I do for the rest of my life.” She also gushed over her co-hosts, “You women have been so incredible to work with.”

She detailed her decision to leave the show in her new memoir, “Bad Republican”. In the book, the daughter of late Sen. John McCain described the work enviroment at the morning talk show as “toxic,” before detailing a fight with her former co-host Joy which was triggering her postpartum anxiety.

Meghan also recalled an on-air disagreement in January with Joy during her second day back from maternity leave where Joy told her that she didn’t miss Meghan following the break. She shared that she was “uncontrollable sobbing” during the commercial break. “Nothing anyone has ever said to me on camera since I have been giving interviews since I was 22 years old ever hit this hard. I was super hormonal and deeply hurt,” she admitted.

She added, “While I wept, I no longer felt safe working at The View. It is one of the most singular feelings of loneliness and anguish I have felt in my entire life. It was a perfect storm of hormones, postpartum anxiety and a lot of demons. I never talked to Joy one on one again after that day.”