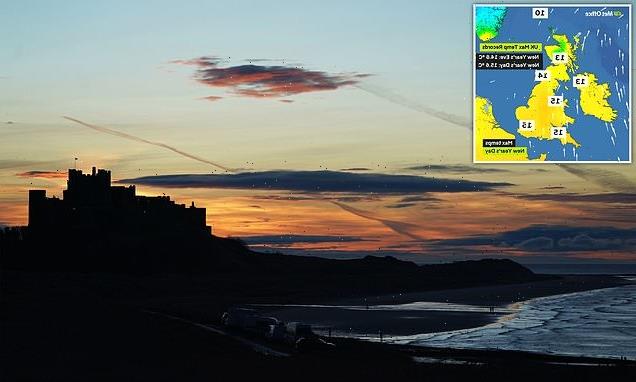 Britain could enjoy its warmest New Year’s Eve and New Year’s Day on record with parts of the country set to be warmer than Madrid and the French Riviera over the coming days amid highs of 16C (61F).

Those ringing in the New Year will see temperatures of between 9C (48F) and 14C (57F) across the UK at midnight tomorrow night – well above the average daytime high for December of 7.6C (45.7F) in England and Wales.

The UK is enjoying spring-like temperatures at the end of 2021 thanks to warm air being drawn up from Azores along with a favourable position of the jet stream and a low pressure system to the west of Ireland.

Mild air moving in today and lasting until the end of New Year’s Day will bring the very warm temperatures which will compare to 15C (59F) in both Nice and Madrid – before a return to wintry conditions and frost next week.

Highs of up to 14C (57F) are possible more widely across England and Wales, even as far north as Newcastle. But the mild spell is set to be a grey affair, with much of the country blanketed by cloud and outbreaks of drizzle likely. 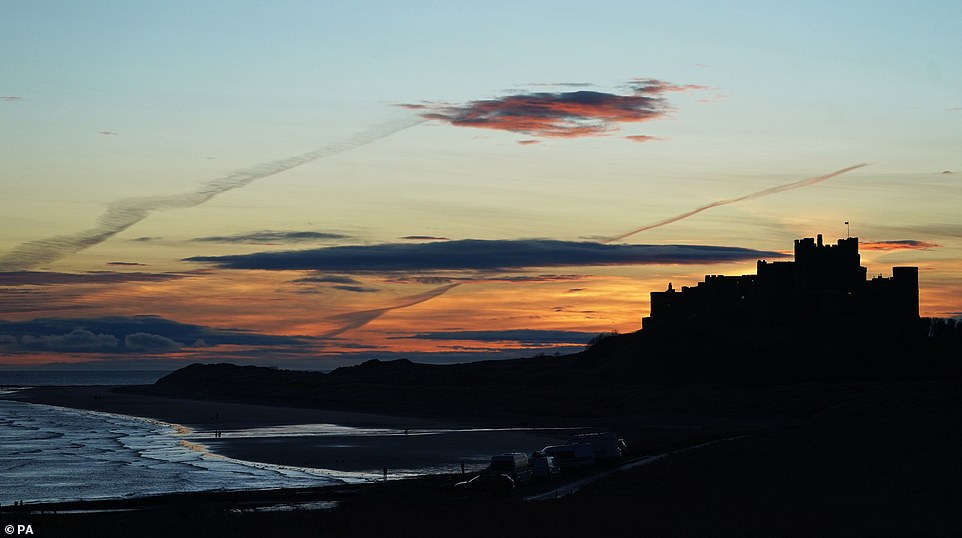 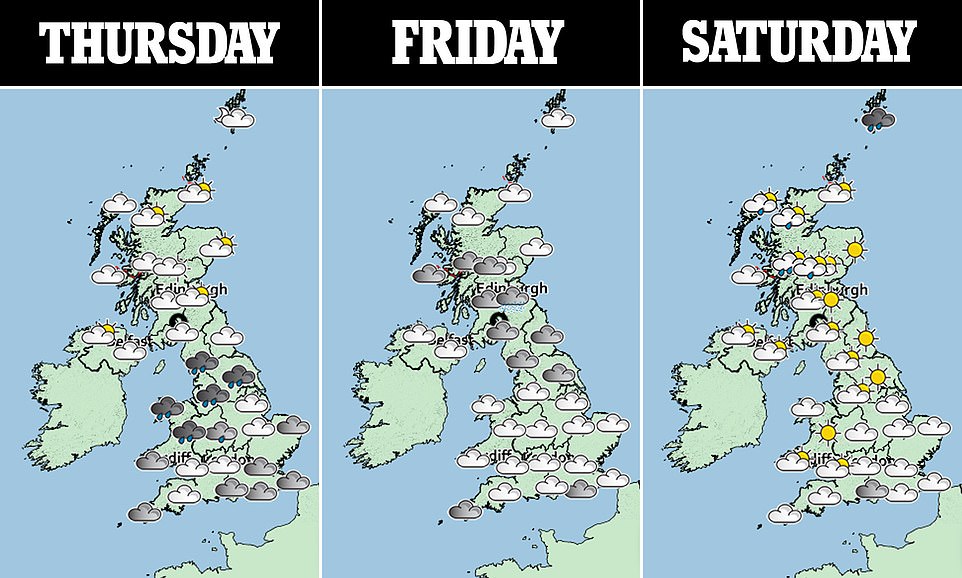 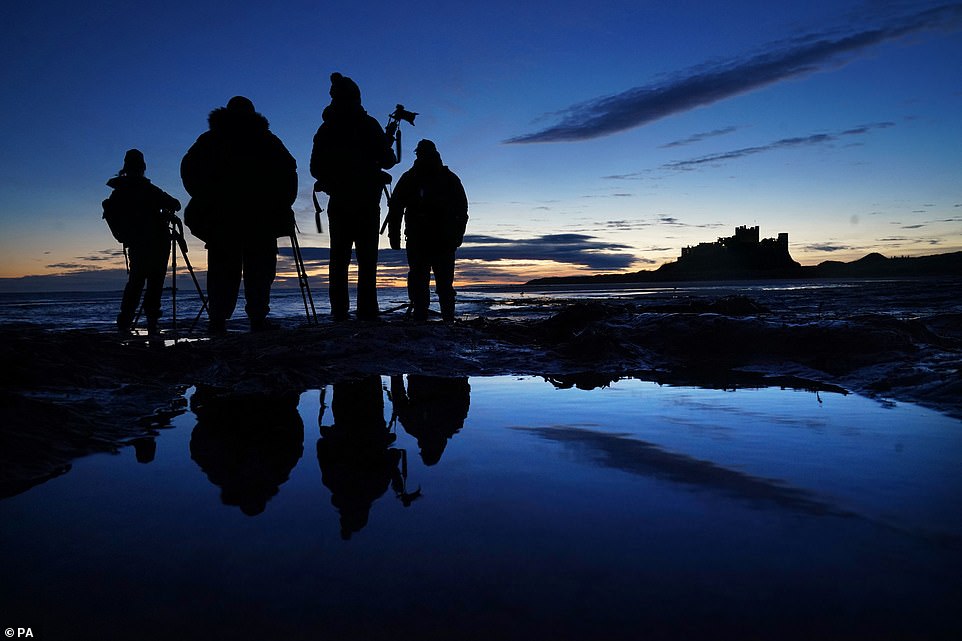 Pictured: Photographers gather prior to sunrise at Bamburgh Castle in Northumberland earlier this morning 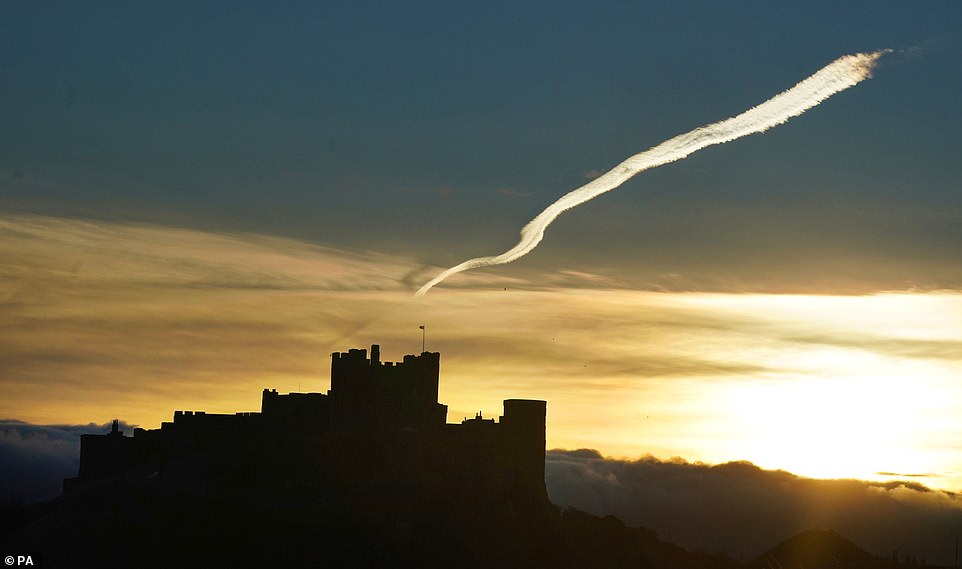 The unusual mild temperatures are due to last until New Year’s Day. Pictured: Sunrise at Bamburgh Castle this morning

Temperatures got up to 15.7C (60.3F) in Exeter yesterday, making it the warmest day of December so far in the UK and also the mildest day in about six weeks since November 19 when Dyce in Aberdeenshire hit 16.8C (62.2F).

Met Office spokesman Richard Miles said: ‘The mild temperatures are due to last until New Year’s Day. It’s not especially common and is being caused by warm air being drawn from the Atlantic.’ 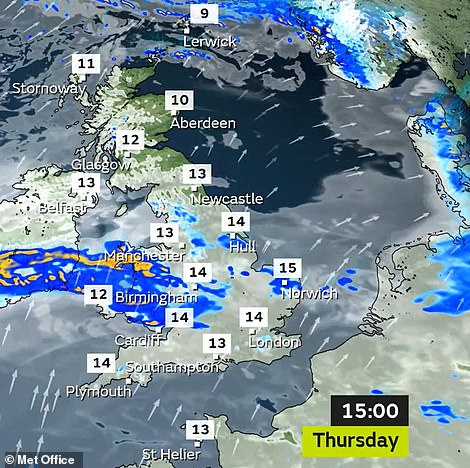 But he added that a low pressure system bringing the mild air is then set to move north-eastwards. ‘That will let colder air flow in behind it bringing temperatures closer to the average for the time of year,’ Mr Miles said.

By Monday and Tuesday, however, there could be ‘some wintry showers on high ground’ such as the North Pennines and rain elsewhere, Mr Miles said.

But the change is also predicted to finally clear some of the cloud, bringing a chance of sunshine – which has been in short supply.

Daytime temperatures will likely take a dramatic plunge – falling to single figures by Tuesday, with highs of 8C (46F) in southern England and just 5C (41F) in the North East. 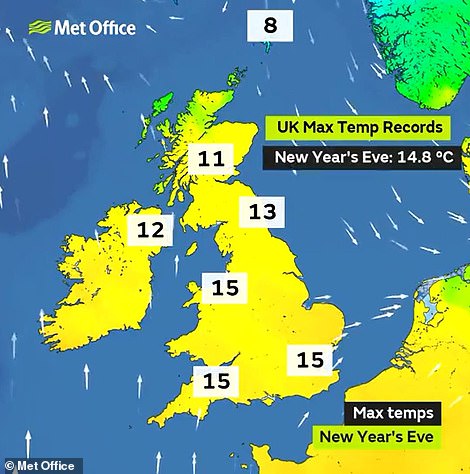 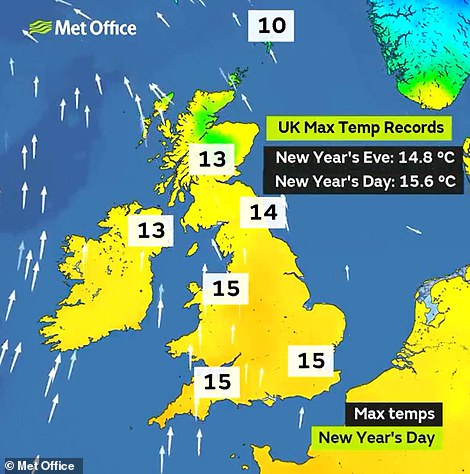 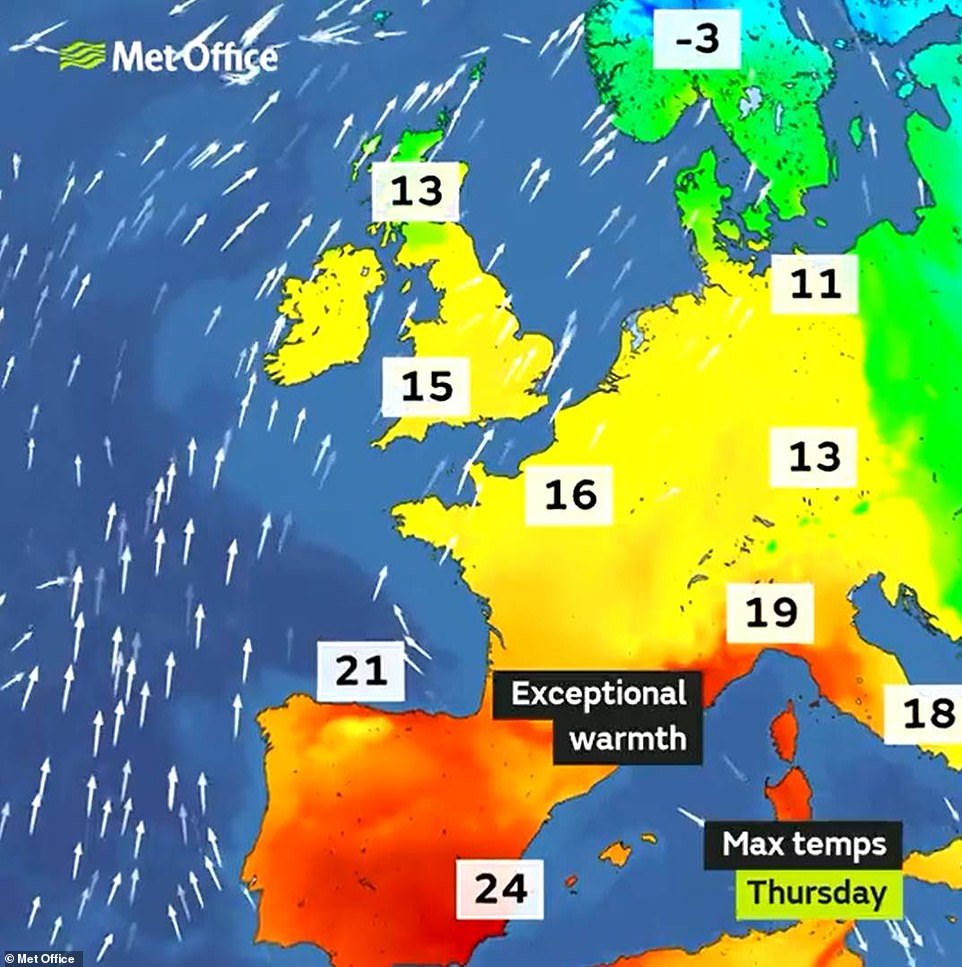 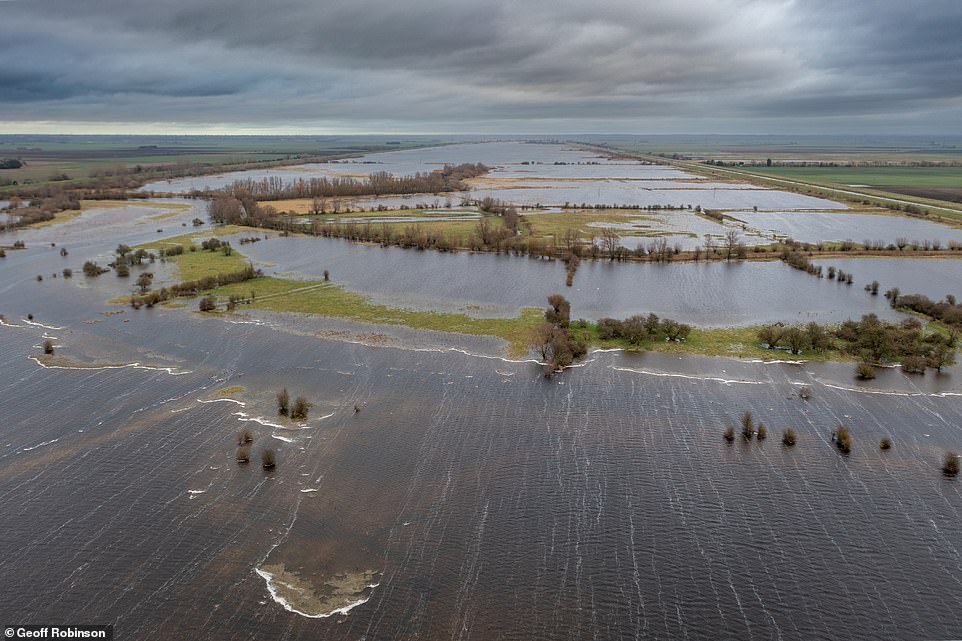 Pictured: parts of Norfolk still underwater this morning after the River Delph burst its banks this week due to heavy rainfall 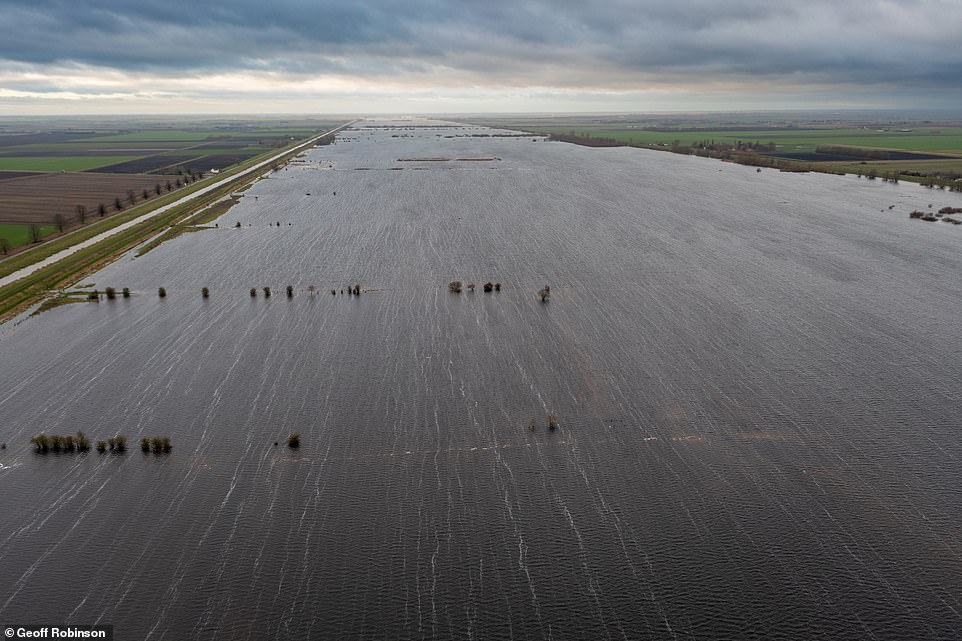 The Met Office forecast states today it will be cloudy and very mild with rain and drizzle across England and Wales, most persistent across western hills. Pictured: Flooded fields in Norfolk this morning after the River Delph burst its banks

Overnight frosts are also possible in the far north. Unsettled conditions are due to continue through the first half of January.

In its longer-range forecast, the Met Office said: ‘Moving beyond the midweek period, changeable conditions with westerly winds are likely to spread across the UK.

‘Spells of rain will be accompanied by milder air, interspersed with showers and nearer average temperatures.’

Meanwhile, an unusually warm spell in Alaska has brought record December temperatures of 19.4C (67F) at a time of year normally associated with bitter cold and thick snow.

Scientist Rick Thoman, from the Alaska Center for Climate Assessment and Policy, said such temperatures were ‘absurd’.