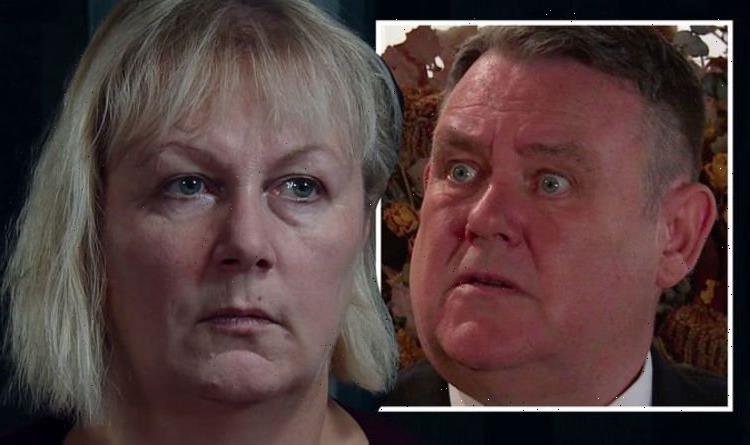 Eileen (played by Sue Cleaver) hasn’t had the best Christmas on Coronation Street, considering her boyfriend George (Tony Maudsley) bought her a funeral plan. Ever since, she has been trying to stay away from him, with her son Todd Grimshaw (Gareth Pierce) lying to his boss about his mother’s whereabouts. However, in Monday night’s episode of the ITV soap, the undertaker seemed to suggest he was going to kill the iconic character and could be more like her ex-husband Pat Phelan (Connor McIntyre) than she first thought.

The latest edition of the weeknight serial drama began with Eileen telling her son she thought it was insensitive her boyfriend had bought her a funeral plan considering she used to be married to a serial killer.

Todd agreed but he also felt guilty as when asked by his boss if he thought it was a good idea, the troublesome character said it was.

According to Eileen’s son, this was done with a manner of sarcasm and he didn’t actually think the undertaker would do it.

As George thought his chances were his love interest was over, she walked into the funeral parlour to talk to him about the gift.

Speaking about the faux pas, it was clear he didn’t mean to cause offence but is this all a charade to mask his killer ways?

“I want a present I can enjoy,” the stalwart remarked, to which George replied: “You would enjoy it, tucked up in your mahogany casket.

“With satin interior and your little lavender scent bag,” he continued but Eileen was not appeased about what he was saying.

“I’m surprised you didn’t figure out, to be honest. You gave me your measurements and told me what your favourite wood is,” he remarked.

“Well it’s clear as mud but I just thought you were being odd. Not planning my flaming wake,” Eileen said, with the undertaker telling her that wasn’t included in the package.

“It felt like a death threat rather than a present from somebody I care about,” an emotional Eileen explained to him.

George said: “I just got carried away with myself, thinking about us and our life together. Getting old and going to the flicks together.

“Sharing some mint imperials and then I just followed on to its logical conclusion,” he added, nodding towards the casket.

“Do you think we will be together when we’re 90-years-old?” the stalwart asked to which the undertaker said he was sure of it.

Asking his girlfriend if this meant they were back together, she agreed they were as she muttered: “Your heart’s in a good place but your head’s a bit daft.”

By the end of the episode, the pair were talking about enjoying a meal together at the bistro, seemingly with their relationship back on track.

Unfortunately, tragedy could still be looming as there were some hints dropped in the conversation about Eileen’s death.

As well as her stating she felt it was a “death threat”, the undertaker now also has her measurements for if he needed to get rid of her.

He also said they would grow old together and the “logical conclusion” of their romance would result in one of them dying.

With his job also being a professional undertaker, all the points add up to suggest the beloved character could be a killer.

Eileen’s past with serial killers also teases she could have landed herself with another one who has a way of disposing of bodies.

The stalwart has been on the show for over 20 years and she has become one of the most beloved residents of the cobbles.

Eileen has always dreamt of being happy in a relationship but one by one, the men in her life have let her down immeasurably.

She thought George might have been different but in a few years time, once he has her trust and everything is signed over in his name, he could get rid of her.

This could be a common trend with his past romances, that he butters them up and then strikes while the iron is hot and murder them.

So could Eileen be leaving Weatherfield in a casket sooner than she ever expected?

However, the actor who plays George and former Benidorm star Tony has previously spoken out on how he would like the relationship to work out.

The soap star said: “I think Sue [Eileen] has been deprived of comedy for so long. She has such a naughty twinkle in her eye and it’s about time writers used that.

“It’s nice to see a smile; I think Eileen and George will be great together and I hope they continue to do that. And I love working with Sue,” he told Metro.co.uk.

So could the ending to Eileen’s life on the cobbles be more comical than sinister?

Coronation Street airs Mondays, Wednesdays and Fridays at 7:30pm and 8:30pm on ITV.