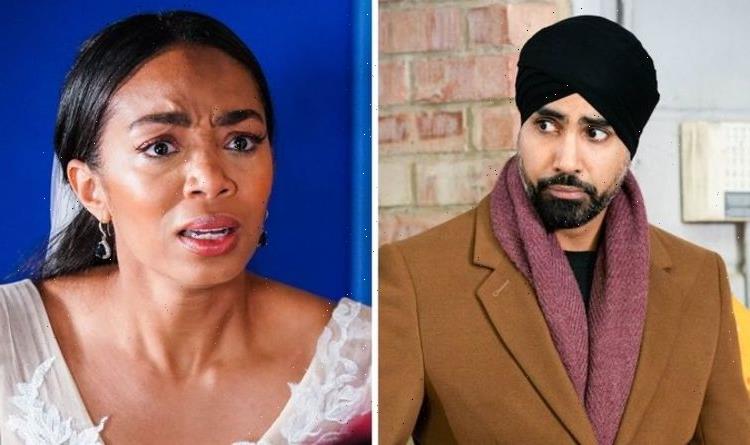 EastEnders: Maisie Smith on her exit and possible return

Whitney (played by Shona McGarty) ended up sending Chelsea (Zaraah Abrahams) screenshots of the harrowing written accounts by Chantelle (Jessica Plummer), which documented Gray’s (Toby-Alexander Smith) abuse. Kheerat (Jaz Deol) had suspected Chantelle was being abused by Gray before her death, and was heartbroken to discover he was right. Consumed by guilt, it seems the EastEnders favourite hopes to make up for what happened to Chantelle by saving Chelsea from the same fate. Could he end up dying in the process?

Viewers of the hit BBC soap know Chantelle suffered a spate of horrific abuse at the hands of the evil lawyer.

Gray has managed to slip under the radar ever since, staging his wife’s death as a tragic accident.

Popular Walford resident Whitney suspected Gray after seeing a different side to him earlier this year, and now she has evidence of his violence towards Chantelle.

After Kheerat warned her they had to be careful about how they planned to bring Gray down, she rushed over to Gray’s house on Christmas morning and tried to seduce him so he’d call the wedding off.

Her plan backfired though, and after Gray told Chelsea Whitney had kissed him, she decided to go through with the marriage.

Desperate, the market trader then stormed over to Chelsea’s to tell her the truth.

“I think he killed her,” Whitney tearfully admitted to the baffled bride.

“You’ve got it wrong,” Chelsea cried. “The police investigated her death.”

Whitney pointed out that as a lawyer, Gray knew how to cover his tracks.

“I know I should have come to you first, I know that – but Kheerat told me not to,” she confessed.

Whitney replied: “Yes. He knows all about this, he believes me.”

She asked: “What do you expect me to do?”

Whitney soon convinced her not to go through with the wedding, but manipulative Gray raced back to the house to tell her Whitney had kissed him and not to trust her.

After a showdown at The Vic, Whitney sent the screenshots of the forum to Whitney before finding Kheerat to formulate a plan.

“I did!” Chelsea shouted as she ran up to the pair.

“You have to help me, I have to get away – I married a murderer,” she pleaded.

With Kheerat feeling guilt over what happened to Chantelle, he is likely to do whatever he can to make sure Chelsea escapes.

It seems he and Whitney might help Chelsea to make a swift but inconspicuous get-away, which may prove difficult in her wedding dress.

The pair could urge Chelsea to pack a bag and get ready to flee as Whitney distracts Gray.

Watching on to make sure Gray doesn’t hurt Whitney or Chelsea, Kheerat will probably be at the centre of the plan.

Not someone to allow things to slip from his control though, Gray will probably go looking for Chelsea, threatening Whitney in order to do so.

Kheerat is bound to step in to help.

If he does so, or if Gray sees him helping Chelsea, he probably won’t make it out of the confrontation alive.

The serial killer has gone on to murder both Tina Carter (Luisa Bradshaw-White) and Kush Kazemi (Davood Ghadami) since he killed Chantelle, so he won’t give a second thought to killing Kheerat.

Will Chelsea manage to get away, and if she does, could Gray end up with Kheerat’s blood on his hands instead?

EastEnders continues on Sunday at 10pm on BBC One.