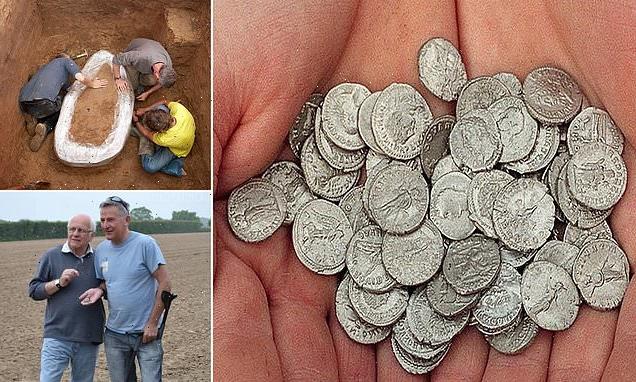 Metal detectorists celebrate ‘best Christmas present’ ever as they get share of £4m reward as world-record hoard of 2,000-year-old coins they found after scanning same field for 30 years is secured for nation

A pair of amateur metal detectorists who unearthed a world-record haul of Iron Age coins are finally set to pocket their reward nine years after their discovery.

Reg Mead, 79, and Richard Miles, 58, had shared stories about the local legend of lost Celtic coins on the eastern side of the island of Jersey for more than 30 years.

Although they didn’t have an exact location, the pair spent hours together scouring various fields over the next three decades in desperate hope of finding anything to cement the legend as truth.

At the start of 2012, they finally secured permission to wander through a new field in Grouville with their metal detectors. On the second day of searching, Richard’s device let out a recognisable zapping sound.

On that gloomy February day the pair uncovered 61 copper and silver coins in total, each adorned with an exotic ‘Red Indian-style’ head with tattoos, plaited hair and necklace on one side and a stylised horse on the other.

They contacted the head of Jersey Heritage, who later helped arrange for an excavation team, and a crane, to help dig one ton haul of around 70,000 coins over four days in the summer of 2012.

Now, after nine excruciating years of negotiations between the Jersey government and the British crown, Reg and Richard are finally set to see a reward after a £4.2million fee was agreed to keep the coins on the island. 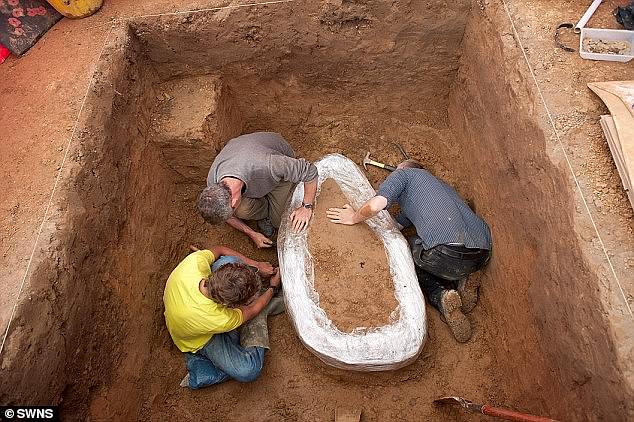 In 2012, amateur metal detectorists discovered a 70,000 strong hoard of valuable Celtic coins that recently sold for £4.25m in Grouville, Jersey 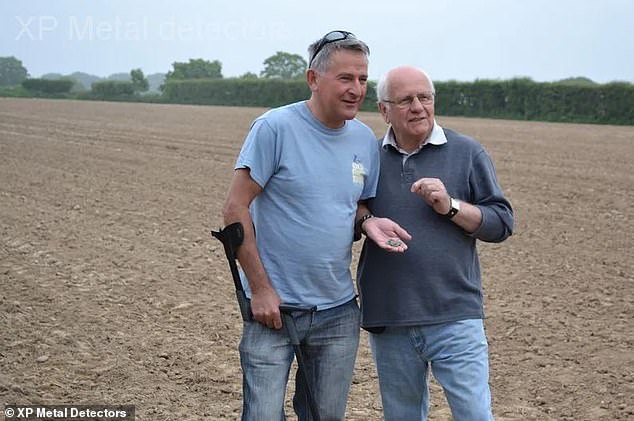 Reg Mead, 79, and Richard Miles, 58, (left) had shared stories about the local legend of lost Celtic coins on the eastern side of the island of Jersey for more than 30 years

Reg Mead and Richard Miles initially received a tip-off in the 1980s from a woman who said she had spotted something in the fields that looked like silver buttons.

In the end, 69,347 coins hailing from Armorica, modern-day Brittany and Normandy, were found under a hedge in a mound of clay in Grouville.

Historians believe the 2000-year-old coins had been buried in a trench dug by a Celtic tribe that fled from Julius Caesar’s rapidly-advancing legions in the first century BC.

The experts who helped dig up the Le Câtillon II hoard of 70,000 Celtic coins in Grouville, Jersey undertook a painstakingly slow process when the secret cache was discovered.

But the coins, which had fused together over the past 2,000 years, actually numbered in the tens of thousands and required the experts to excavate as a single block.

Maher decided to leave a thin layer of soil around the chunk in order to keep the coins damp.

Once the coins had been safely prepared, a mechanical crane was drafted in to lift the one ton structure.

The top of the coins were encased in foam and plywood, while the remainder was wrapped in a protective metal structure, which would be lifted by the crane.

In 55BC, Caesar’s army sliced and pillaged its way through Gaul, and Roman galleys popped up like death ships off the coast, a Celtic tribe called the Coriosolitae buried their treasure in a panic.

But because Jersey’s legislature doesn’t account for significant treasure finds, the haul was automatically transferred to the Queen’s ownership once it was uncovered.

Since 2012, Jersey’s receiver general Alan Blair, the government and finders Reg and Richard have wrangled over the price of the Le Câtillon II hoard.

Despite a difference in valuation numbering in the millions, they agreed a £4.25m price on December 17, ensuring the historic collection with remain on the island.

Part of the financial settlement included a £250,000 payment to Jersey Heritage for their work towards dismantling the coins, and an additional £250,000 which will be used to establish a trust.

MailOnline understands that £4.2million will be split between finders Reg and Richard, Jersey Heritage for cleaning and displaying costs and the land owner.

The exact total that the pair will receive as a reward for their find has remained confidential.

But Reg told MailOnline they were happy with the final figure, and are especially delighted to see an end to the near 10-year saga.

‘I am chuffed to bits, we can finally get it out of the way now,’ he explained.

‘It’s got nothing to do with the money, it’s about the effect this had had on our families every day over the last 10 years.

‘My wife often said it was the elephant in the lounge, once you go in there, you always trip over the thing.

‘The settlement is the best Christmas present us and our families could have had.’

Richard added: ‘You could never imagine it could one day happen to you – the largest coin haul found on the British isles.

‘The last 10 years been a fantastic journey.

‘I’ve met some fascinating people, been able to discuss the hoard and be involved in the research, it has been absolutely wonderful.

‘It’s been a rollercoaster for sure, plenty of ups and downs, but the money is just the bonus because the coins will be staying in Jersey.

‘We started this with the right intentions and have achieved something for everybody.’ 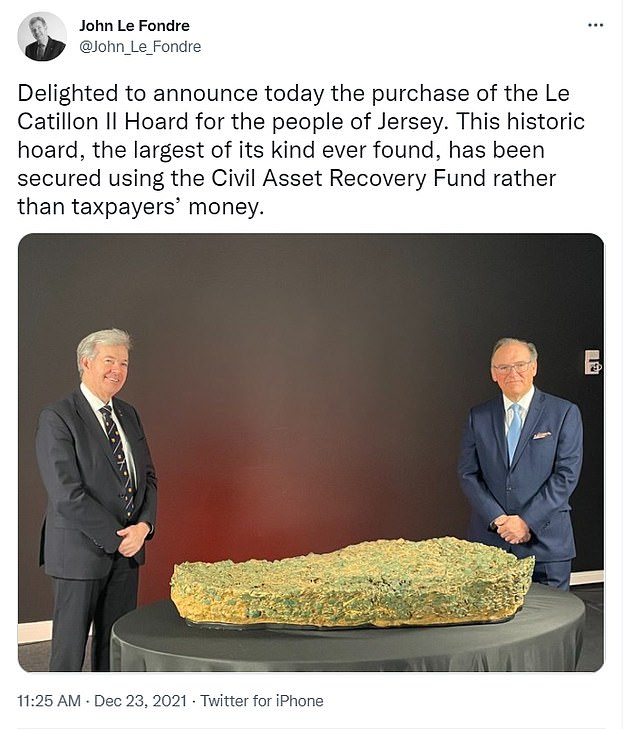 Chief Minister John Le Fondre said the purchase had been made ‘in the interest of the island’.

He said: ‘This is an outcome which will ensure that this unique part of Jersey’s history remains in the island for this and future generations.

‘Since its discovery nine years ago, Jersey Heritage conservators, archaeologists and volunteers have unpicked and studied the hoard, but there is still much that it can reveal about Jersey and our place in the world at the time of Christ.’