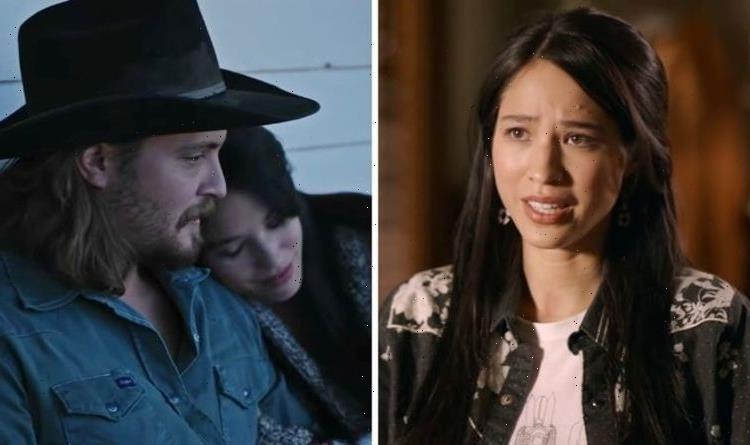 Monica (played by Kelsey Asbille) and Kayce Dutton (Luke Grimes) are slowly repairing their relationship after the shocking attack on Yellowstone at the end of the last season. With another baby on the way, and just two episodes left in season four, the Paramount drama could still spring some nasty surprises on the audience before the year is out.

The fourth season of Yellowstone is building up to another epic finale, and Monica could find herself at the centre of the Duttons’ conflict yet again.

At the end of season three, Monica and her son Tate (Brecken Merrill) were caught up in a horrific ambush that left the ranching family fighting for their lives.

Now, Tate has finally started to recover from his trauma, Kayce is more committed to Monica than ever and the family have restarted their lives in a new home away from the ranch.

In the latest episode, No Kindness For the Coward, Monica reveals to Luke that they had once again managed to get pregnant.

The couple were ecstatic with the news, and Yellowstone could very well be welcoming a new member of the family in the likely fifth season of the series.

However, as the rest of the series has proved, happiness for the Duttons can often be fleeting.

Co-stars Luke and Kelsey recently previewed what’s to come for Kayce and Monica in a new behind-the-scenes video on Paramount’s official YouTube page.

Luke explained: “I think he’s absolutely thrilled at the prospect of having another kid.”

“Where they are when he hears that in this new place, he’s in a good spot to get that news.”

Luke jumped at the chance to own their own property and wasted no time in agreeing to a sale.

Not only does their new house come with a barn and a dog, but it should also provide the youngest of John Dutton’s (Kevin Costner) sons to raise his family in peace.

“It’s a wonderful light that is brought into their lives,” Luke’s co-star Kesley added.

Still, raising a new baby comes with its fair share of risks, and those go double for members of the Dutton dynasty.

Luke admitted: “There’s a part of him that’s saying, ‘okay I’m bringing another human into this situation.’”

And Kelsey also had reservations about bringing a new child into the mix.

“It just makes her more of a target, unfortunately,” she teased.

While Garrett Randall (Will Patton) and his team of militia didn’t discriminate amongst the Duttons, he clearly realised Kayce’s side of the family would be more vulnerable.

With Jamie (Wes Bentley) still keeping tabs, he could tell his biological father that Monica will be more defenceless than ever as she prepares to welcome a new life to their home.

Until then, Kelsey hopes Monica and Kayce can enjoy their family fantasy until reality comes knocking.

She added: “But I’ll let her have her happy moment, for now.”

Whether the moment arrives at the end of season four or at the beginning of season five, Monica’s pregnancy may just spell more tragedy for the Duttons still to come.