Singapore: Home Affairs Minister Karen Andrews says the threat of extremism in Australia will rise as international borders reopen following the re-emergence of the Taliban in Afghanistan.

Andrews is in Indonesia to meet with Coordinating Minister for Politics, Law and Security Mahfud MD and to enhance counter-terrorism ties with Australia’s near neighbour. 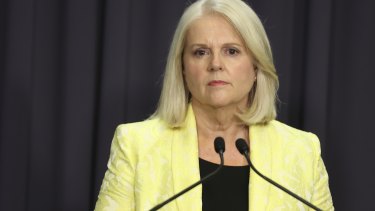 Andrews believes there is a need to deepen the countries’ level of collaboration and information sharing in the current regional security landscape.

“The ability for people to travel more freely over the coming months is going to be significant,” she said.

“The more we are able to do with neighbours … specifically Indonesia … the better prospects that we have and being able to deal with the travel and counter-terrorism and manage the threat.”

She told The Sydney Morning Herald and The Age on Wednesday that two things in particular “have caused us considerable concern”.

“The second issue is the changes in Afghanistan. People are trying to leave Afghanistan. Potentially, they will come via Indonesia and may well look to come to Australia. 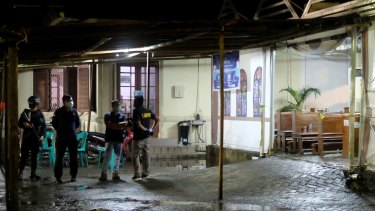 Members Indonesian’s anti-terrorism squad stand in front of a church hit by a bombing in Makassar, South Sulawesi in March. Credit:Getty Images

“But also there are people in Indonesia, and in Australia, who we are very much aware of, who are very interested in travelling to Afghanistan to take up arms there. That threat to us has been made more potent as those travel restrictions ease and our borders reopened.”

Andrews is being flanked by Australian Federal Police Assistant Commissioner Nigel Ryan in Jakarta, on the final leg of an overseas tour that also took in the United States and Sri Lanka.

Jakarta and Canberra renewed a joint commitment to fight terrorism during a visit by Foreign Minister Marise Payne and Defence Minister Peter Dutton in September.

Both Australia and Indonesia have urged the Taliban, which reclaimed power in August, not to allow Afghanistan to once again become a breeding ground for terrorism.

Indonesia, the world’s largest Muslim majority nation, has undertaken a major crackdown of suspected members of Jemaah Islamiyah, an al-Qaeda-linked terror organisation behind the 2002 Bali bombings that killed 202 people including 88 Australians.

Police there have arrested dozens of members of the militant network in recent months. They have said they foiled plans for a fresh attack on Independence Day last August.

The arrests by the counter-terrorism squad Detachment 88 include that of Ahmad Zain An-Najah, a senior cleric with the Ulema Council, the top Islamic organisation. He and two associates were last month charged with establishing a charity organisation that diverted cash to JI.

A report in September by the Jakarta-based Institute for Policy Analysis of Conflict, however, said Islamic State cells in Indonesia posed a greater threat than JI, which no longer has active links with al-Qaeda.

Andrews, meanwhile, said the government was treating seriously reports of further illegal fishing by Indonesian vessels off the north-west coast of Western Australia.

Andrews would not say whether ABF reserved the right to torch more boats it they were found fishing illegally but added: “We need to send a strong message that we take this seriously”.

“We are aware that in [that] particular part of the ocean there are a large number of illegal fishers working in that area,” she said. “Our position is we don’t want illegal fishing to take place in the first instance.

“We will provide warnings. We have provided warnings in the past to illegal fishing to make sure that they remove themselves from the area. In most instances, that actually takes place.”