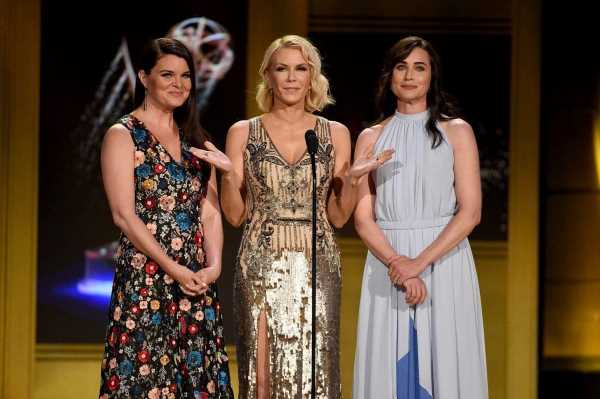 The Bold and the Beautiful is bringing holiday cheer this Christmas. Goodwill and tidings are in the air as The Forresters, Logans, and Spencers celebrate the holidays. It’s also a season of miracles as many enemies put aside their differences for one evening.

Quinn Fuller (Rena Sofer) and Brooke Logan (Katherine Kelly Lang) will never be friends. The two women have been in a bitter feud for years, and tension has escalated in recent months. Brooke’s interference in Quinn and Eric Forrester’s (John McCook) marriage has sparked the jewelry designer’s outrage.

Although Quinn and Brooke are fighting, they’re determined not to let it ruin everyone’s holiday. According to spoilers from Celeb Dirty Laundry, the two women agree to keep things cordial for the night. Quinn and Brooke making peace is a Christmas miracle, but it’s not the only surprise The Bold and the Beautiful has in store.

It’s the moment The Bold and the Beautiful fans have been waiting for. Taylor Hayes (Krista Allen) and Sheila Carter (Kimberlin Brown) will come face-to-face for the first time in years. The two have a long history, and it was Sheila who shot Taylor, making everyone believe the beloved doctor was dead. With mama Hayes back in town, she’s vowed to protect her daughter Steffy Forrester (Jacqueline MacInnes Wood).

But Taylor’s act of goodwill in inviting Sheila to spend Christmas with them will shock and anger Steffy. While Sheila’s overjoyed to be with her son and grandson, Steffy will be fuming. Although Taylor showed she was the bigger woman by including Sheila in the festivities, one must wonder about her motive.

Drama returns after the New Year

Everyone may make peace at Christmas, but their rivalries are sure to reignite in the New Year. Quinn and Brooke’s feud is up in the air. With Brooke and Ridge Forrester (Thorsten Kaye) having marital issues, she may not be as focused on interfering with Quinn’s marriage.

As for Taylor and Sheila, it wouldn’t be surprising to see them fighting. Taylor hasn’t forgotten about the pain Sheila inflicted on her and her family. She’s keeping a close eye on Sheila and has her guard up when it comes to the notorious villain. Yet, Taylor may join Sheila when they discover they both have Brooke as an enemy.