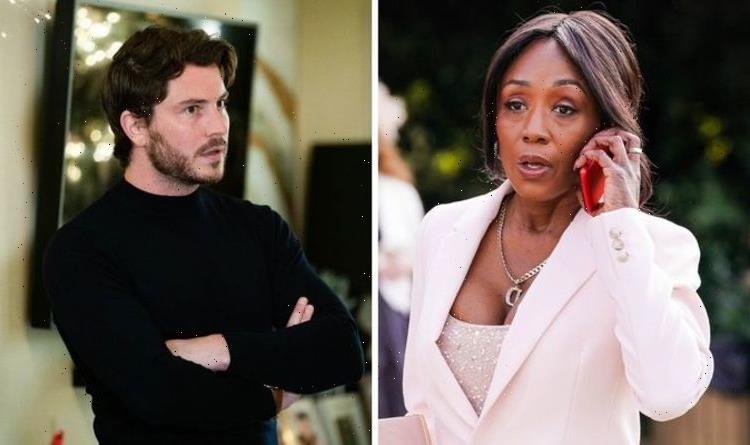 EastEnders: Maisie Smith on her exit and possible return

Gray (played by Toby-Alexander Smith) was abusive towards his wife Chantelle (Jessica Plummer) before he murdered her in their home in dramatic scenes last year. EastEnders fans are desperate for the manipulative villain’s crimes to be exposed, but he has since gone on to murder other Walford residents. After Denise (Diane Parish) was warned by a concerned Whitney (Shona McGarty) on Monday’s instalment of the BBC soap, she seemed horrified. Having been domestically abused herself in the past, could a terrified Denise kill Gray to protect her daughter?

During Monday’s episode, Whitney tried to find out everything she could about Gray’s dark side after she was disturbed by comments made to her by his former colleague.

She spoke to Kheerat Panesar (Jaz Deol) who had been suspicious of Gray following Chantelle’s death.

After he told her he had been mistaken to think Gray had anything to do with Chantelle dying, Whitney refused to give up.

She tracked down Gray’s colleague and was later seen talking to Denise, warning her to help her stop the upcoming wedding.

“You worked for Chantelle, didn’t you?” Whitney asked Kheerat.

“Did she ever say anything to you about Gray?”

“Like what?” asked Kheerat, who was devastated by Chantelle’s tragic demise.

“Like… Did they ever have any problems? Any arguments?” Whitney replied.

“Did she ever have any doubts about him?” She added.

“Is there something you want from me, Whitney?” Keerat responded.

“I spoke to Gray’s boss earlier, she sacked him because she reckons he’s a nasty piece of work,” the market trader informed Kheerat.

“Manipulate – a bully.” She added: “She knows the real him and Chantelle knew the real him, if you know anything at all-“

But Kheerat cut her off, telling her he had made a mistake in the aftermath of Chantelle’s death.

Not knowing who else to talk to, Whitney later found Denise, telling her not to allow Chelsea to marry Gray.

“There’s stuff you don’t know, you’ve got to help me,” Whitney pleaded.

“Help me stop Chelsea from making the biggest mistake of her life.”

Denise seemed stunned at Whitney’s revelation, and loyal fans of the soap will remember Denise herself was a victim of domestic abuse.

If Whitney explains to Denise her concerns about Gray and his possible connection with Chantelle’s death, the Fox family matriarch isn’t likely to step back and allow Chelsea to marry Gray.

Teaming up with Whitney, could she somehow get to the truth about what happened to Chantelle?

If she does, she is bound to confront Gray about it, who won’t be pleased to hear the accusations.

The violent resident will probably try to attack Denise to keep her quiet, as he did to Tina Carter (Luisa Bradshaw-White), whom he ended up murdering.

But with Whitney and Denise potentially joining forces to take down Gray, could they overpower him?

Perhaps Denise could issue a fatal blow and end up killing Gray.

Fans have been desperate to see Gray finally exposed, and it seems they might get their wish as the anticipated Christmas episode draws nearer.

With Whitney determined to put a stop to the wedding, and Denise terrified for her daughter, the duo might just be the ones to expose the disgraced lawyer for what he really is.

If Denise ends up killing Gray, what could the repercussions be?

Will the pair be able to prove Gray’s murderous and abusive past?

EastEnders continues on Tuesday at 7.30pm on BBC One.