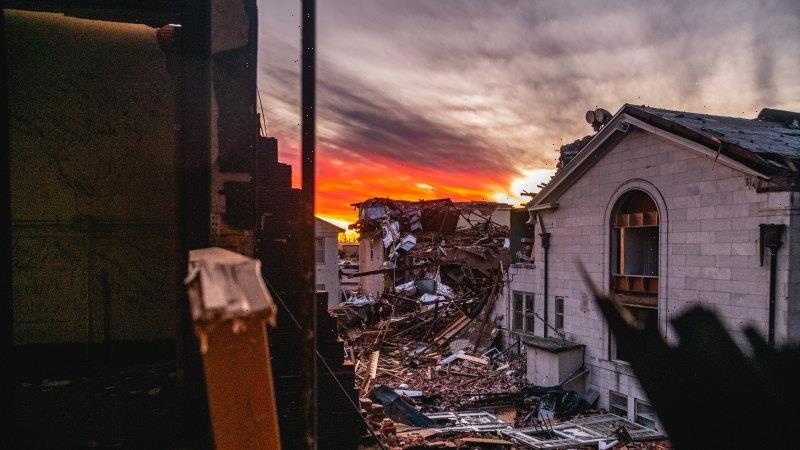 Monette, Arkansas: Barbara Richards made a horrifying discovery as she looked out the glass door of the Monette Manor nursing home.

A tornado was heading straight for her.

“I could see the rotation outside before it got to us,” Richards, 57, said in an interview. 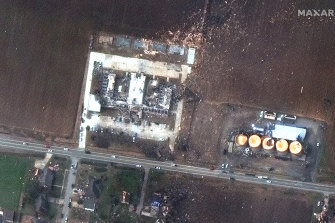 A satellite photo shows the Monette Manor Nursing Home and other homes in the aftermath of the tornado.Credit:AP

She ran back toward the residents, warning them to cover their heads with pillows and hold on tight. She and the other nurses had already gathered the home’s elderly residents together, putting as many as they could in a hallway near the nurse’s station. They barricaded the glass doors with mattresses.

There wasn’t anything left to do.

“Then it hit and blew the glass out of the windows in the facility,” Richards said. “You could see the rotation inside the building.”

The Monette nursing home was hit by the same series of tornadoes that struck six states on Friday night, US time, wreaking havoc across Missouri, Tennessee and Kentucky. The twisters left at least 50 and potentially more than 100 people dead, and levelled entire towns. 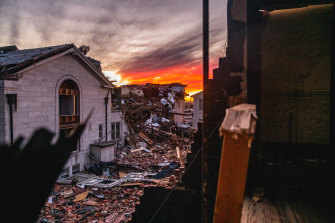 The path of destruction of the deadly tornado in Mayfield, Kentucky. Credit:Bloomberg

In this corner of Arkansas, a tornado struck the nursing home – which housed 67 elderly residents – and killed one man in his 80s. But the death toll could have been worse if Richards and others hadn’t been so quick to act.

In the centre of the storm, Richards grabbed onto the residents in their wheelchairs beside her and hauled her body on top of them, shielding them from the worst of the debris. She noticed her fellow nurses do the same.

As the wind ripped pillows out of the seniors’ hands, they sobbed. One attendant was whacked in the head with debris. Richards told them all to sing hymns and start praying.

They sang “all different ones, whatever ones they could think of – anything to get them thinking about something else,” she said.

So they did, one song after another, as the tornado ripped through the residency, demolishing the roof and the walls, breaking the sprinkler system and causing water to soak the frail 80-, 90- and 100-year old residents.

As the wind died down, as the debris settled and the walls stopped crumbling, Richards extricated herself from the residents and placed a call on her phone for help.

Firefighter Shawn Nance, 47, had seen the storm coming from his porch when he noticed a bad sign: lights flashing in the distance. It was power lines, flashing and arcing as they broke. He and his family quickly made plans to escape the storm’s path. 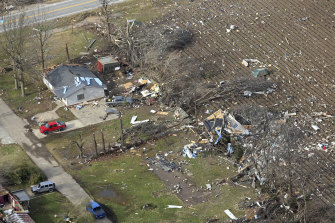 Homes hit by the violent storms in the small town of Monette, in north-east Arkansas. Credit:AP

Then he got a call from the local fire chief, whose truck had been battered by the tornado, leaving him stranded. Nance rushed over to pick him up. In doing so, they saw the tornado’s path.

“I said ‘Chief, this is going right toward the nursing home,’ ” Nance said.

“That’s the last grandmother I’ve got, and the last one she’s got, too,” he said.

The pair rushed to the scene. 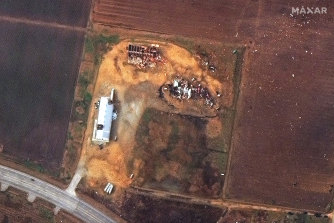 A satellite photo provided by Maxar shows farm buildings in Monette, Arkansas, after they were hit by a tornado. Credit:AP

When they pulled up, they were greeted by two storm chasers, Jordan Hall and Scott Peake, who had arrived minutes earlier. After tailing the tornado, they had stopped the car to inspect the nearby houses that were destroyed to see if there were any survivors they could help. They thought the building they saw nearby was an old school.

And then they heard people from inside the building, Hall said, “screaming for help.”

Outside, much of the building’s roof was gone, having collapsed into the halls and rooms. Water from the fire suppression system was pouring out, flooding the building.

Curiously, one of the only parts left untouched was a large wreath, still intact, hanging on the wall outside.

The image that stays with Hall the most is perhaps the simplest one: an elderly resident, sitting in his wheelchair against a wall, the ruins of his former nursing home around him. He was soaked to the bone but completely unscathed. Barely illuminated in the dark, cold night, Hall could see a red Santa Claus hat on his head.

“He had a blank stare on his face – super calm, but like he knew what had just happened,” said the 24-year-old. “It was kind of – I don’t know. It was heartbreaking.”

Peake had gone with a group to rescue people from the southern portion of the Monette nursing home, while Hall and others went to the northern end, which was harder hit. It was nighttime, water was gushing, pipes and debris were everywhere. Exposed wires hung from walls. Elderly people in wheelchairs and on cots were trapped, some crying out for help. 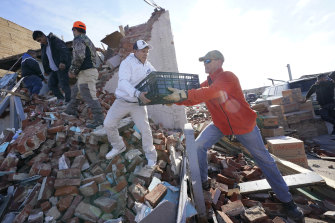 People salvage items in Mayfield in the aftermath of the storms.Credit:AP

“It felt like being in the Titanic while it was sinking. Going through those dark hallways with a little flashlight or camera phone with an officer, and the water is cascading down from the ceiling,” he said. “It just had that feeling – that helpless feeling.”

In one wrecked room, he said he found an elderly woman pinned down under cinder blocks.

“Her entire roof was gone. I remember looking up and seeing nothing but lightning and trees,” Hall said. “And the only thing she could say is, ‘Please help me I can’t find my glasses.’”

She kept repeating it to him.

“I remember wiping her face off because she had dirt on her face and I remember telling her I’d get her out of there,” he said.

“It looked like multiple wheelchairs were stacked on top of each other, but there were people in those wheelchairs. And on top of that, the cinder block wall started to cave in on a couple of those residents,” he said.

He worked quickly to extract each of the residents from the tower of wheelchairs.

Nurses who worked at the Monette nursing home but were not on shift that Friday showed up to help, and started a checklist to account for all residents and help any way they could. Other residents in the tight-knit community of nearly 1700 also came to pitch in.

Rescuers pulled chairs from the wreckage and lined them up around running cars, propping the rescued residents on them to keep them warm. It was nighttime, the wind was fierce and it was raining.

The residents shivered, in shock, as more of their neighbours were rescued from the home.

“This could have been my grandparents,” Peake said. “We did everything we could to comfort them.”

Nance did find his grandma, untouched except for dust hurting her eyes. His wife’s grandmother survived, too.

But not everyone made it.

Peake recalled helping pull out one man from the rubble. He was wearing pajamas and off-red socks. He brought the man to the open air and stepped away for the EMTs to do their work.

“When I came back he had the sheet over his face. And that’s when I realised,” Peake said.

As the sun set Saturday night, shooting orange streaks were in the clouds above the broken nursing home, and all was quiet.

The Christmas wreath still hung, tilted, at the building’s entrance – a lonely reminder of the festivities the residents had in store as the holidays approached. A few cars still in the parking lot looked as if they had been slammed by boulders, their doors and hoods were caved in.

Nearby, a steel granary tower looked like aluminum foil, crumpled and tossed on the flatlands of Arkansas.

Kevin Stewart, the skilled nursing facility’s administrator, walked through the remains to retrieve a few items for the evacuated residents.

“We’ve got a good community,” he said in front of what used to be the building’s lobby. The home had been a place where volunteers – including local high school students – would come to help entertain residents.

As he looked about the wreckage, he contemplated rebuilding the cherished home.