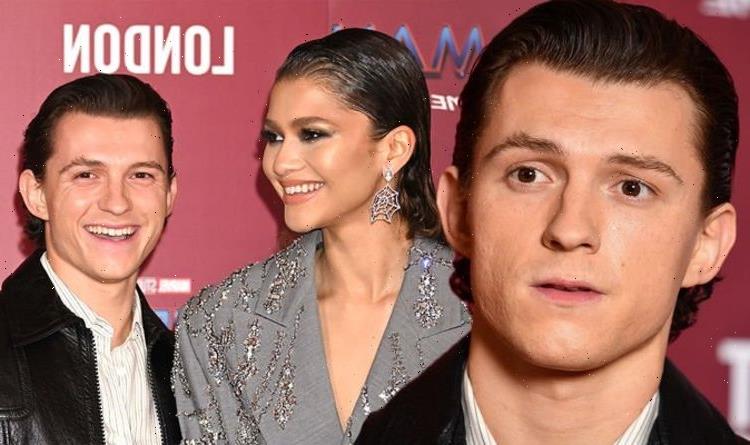 Tom Holland reveals he has received the Spider-Man 3 script

Spider-Man star Tom Holland sheepishly told Zoe Ball about his most embarrassing on-set moment with romantic interest Zendaya, admitting it was “obvious” to his fellow cast members. The actor appeared on the BBC Radio 2 show ahead of new film Spider-Man: No Way Home, which sees him team up with Benedict Cumberbatch’s Doctor Strange.

Zoe opened up the floor to questions from her radio audience, getting children to phone in and ask their favourite Marvel actor all about his time as Spider-Man.

One question came from an excited Lily in Folkestone, who asked: “What is the most embarrassing but funniest thing you have done on set?”

Tom, 25, applauded Lily for her “great question”, telling her that he would be “very honest” with his response before launching into the story.

“In Spiderman: No Way Home there is a sequence where I save MJ and Ned.

“And I catch them and have to sort of swing down. It’s kind of halfway through the film,” he explained.

“And as we landed, Jacob was in front of me and Zendaya was behind me, and as I squatted, I let one rip. And Zendaya was, like, right behind me.”

At this point, Zoe burst into laughter at the thought of the action sequence.

Tom continued: “The lucky thing is that the suit is so tight that no one could smell anything.

“Unfortunately, because the suit is so tight, I could smell everything for the rest of the day.

“It was one of those ones where I couldn’t even pretend it was a seam ripping or anything. It was very obvious.”

Tom and Zendaya, 25, recently broke the internet when it was seemingly confirmed the two were officially dating, but they have since addressed the “invasive” fascination with their love lives.

The pair met while filming for Spider-Man: Homecoming in 2016 and described each other as close friends ever since.

‘Disgusted’ Brian May rages at the Government with savage video [INSIGHT]

The stars proved their fans right after years of speculation, however, when they were spotted kissing in a car in Los Angeles over the summer.

In a new joint interview, Zendaya branded the paparazzi shot as “confusing and invasive”, while explaining how she wished some moments between the couple could have been kept out of the public eye.

“It was quite strange and weird and confusing and invasive,” Zendaya recalled in a nod towards the snaps and the explosive fan response to their kiss online.

“The equal sentiment [we both share] is just that when you really love and care about somebody, some moments or things, you wish were your own.”

“It’s something that you want to deal with and go through and experience and enjoy amongst the two people that love each other.”

Tom also told GQ magazine: “One of the downsides of our fame is that privacy isn’t really in our control anymore.

“A moment that you think is between two people that love each other very much is now a moment that is shared with the entire world.

“I’ve always been really adamant to keep my private life private, because I share so much of my life with the world anyway,” he continued.

“We sort of felt robbed of our privacy. I don’t think it’s about not being ready. It’s just that we didn’t want to.”

The Zoe Ball Breakfast Show airs from 6:30am every weekday on BBC Radio 2.