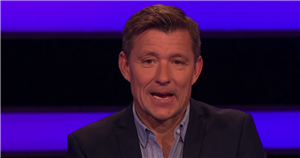 Tipping Point fans could not believe their eyes when a lookalike contestant managed to bag himself the £10k jackpot.

Viewers of the ITV show took to Twitter when they spotted an uncanny resemblance between Steven and a certain movie star.

As host Ben Shepherd chatted to the excited contestant fans flocked to the social media site to see if others shared their opinion on the doppelganger.

Steven, dressed in a T-shirt and jeans with mid-length hair falling around his face, sparked nostalgia with his likeness for Scooby-Doo hero Shaggy.

There was no mystery machine required for Steven as he cruised his way to becoming the winner of the show and eventually nabbed the generous £10k prize.

But viewers were more focused on his appearance than the victory as they sang his praises online.

One wrote: "I came on for the Shaggy comments and you guys didn’t disappoint! Well done though to him, great result #tippingpoint."

Another joked: "Bit of shaggy on a Friday. Sets you up for the weekend #tippingpoint." A fourth noted: "Shaggy from Scooby-Doo on #tippingpoint."

Another viewer asked their fellow tweeters for their input as they asked: "Am I the only one thinking Steven on

And another hopeful user added: "No one has won #TippingPoint all week. Will Shaggy win the 10K today?" More viewers then congratulated Steven on his win as they admitted feeling he had deserved his victory after his efforts.

A fourth continued: "Absolute blinder there Steven. Totally deserved the money good game play good on you son. Enjoy it."

Stay up to date with the latest news in Showbiz and follow your favourite celebrities by signing up for our newsletter by clicking here .