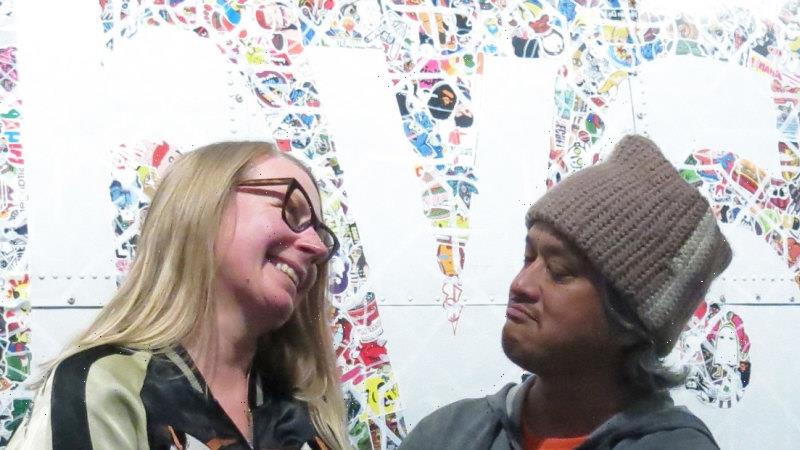 Dromology, according to its inventor, French philosopher, Paul Virilio, is “the science (or logic) of speed”. The idea is that the speed at which something happens changes the nature of the phenomena, our perceptions and expectations. In warfare this once meant an army might gain an advantage through a forced march in the middle of the night while the enemy was sleeping. Nowadays, it means death can be dealt from the skies by a drone while your opponents are still loading their rifles.

Claire Healy and Sean Cordeiro cite dromology as a key reference for their survey, Post-haste, at the Blue Mountains City Art Gallery in Katoomba. As residents of Blackheath, the duo are the latest locals to have an exhibition in this relatively youthful venue, which resisted the lure of speed so successfully it spent decades on the drawing board before finally opening in late 2012.

Dromology is no more than a pseudo-science but its applications are ubiquitous. The Internet and the mobile phone are dromological phenomena, altering the speed with which we access (and forget) information. Having gotten rid of film we take many more photos, but probably fewer good ones. Computers allow us to accurately predict future events, such as the rate of global warming, but can’t convince us to act on this data. 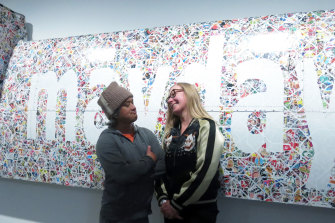 Artists Sean Cordeiro and Claire Healy in their exhibition Post-haste.Credit:Silversalt

For everything gained in a dromological world, something else is lost. We race from one city to another but lose our appreciation of landscape and cultural difference. Information takes precedence over wisdom, as we see more but think less. Experience becomes emptied out, even as we squeeze in a greater range of sensations.

Healy and Cordeiro are fascinated by the double-edged nature of ‘progress’. As technology advances further and faster it leaves behind a huge amount of junk. This includes mountains of superceded hardware, and the collateral damage of human beings whose jobs have been lost to automation.

Some of the pieces in Post-haste were included in Healy and Cordeiro’s survey show at the Museum of Contemporary Art in 2012 but there’s much new material made during the COVID-19 lockdowns. The most eye-catching of the older works is Par Avion (2011) a complete Cessna 172, which has been cut into chunks, mailed to the United States and back. Laid out on the gallery wall, the dismantled plane has vague echoes of a crucifixion – a wry comment on the way we worship technology. 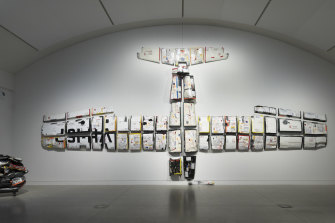 The idea of cutting a plane into small pieces so it can be sent via air mail is reminiscent of another pseudo-discipline: Alfred Jarry’s pataphysics – the science of imaginary solutions. The artists have provided a nonsensical problem and an equally nonsensical solution. But isn’t this the case with most art, no matter how conventional? Artists are always setting themselves urgent problems that nobody else recognises as such.

It’s a lot of work for a visual gag which treats car parts like chunks of meat taken by cavemen from some mighty beast.

On another wall, an even larger work, We Hunt Mammoth (2015) disassembles a Honda into 120 components and dangles them like trophies in string mesh bags. It’s a lot of work for a visual gag which treats car parts like chunks of meat taken by cavemen from some mighty beast. There’s reason to believe, as Walt Disney showed in the 1950 Goofy parable of Mr Walker and Mr Wheeler, that cars bring out the caveman in us. 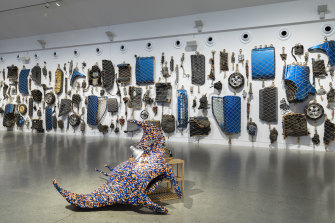 Had they not been confined to home base by Australia’s closed borders, Healy and Cordeiro would have spent a good part of the past two years undertaking residencies in countries such as Japan. Instead, they’ve been travelling in their minds, with many pieces made in Blackheath bearing Japanese titles and imagery.

The duo are accidental sculptors who make three-dimensional objects and reliefs but are probably more devoted to image and idea than process. The same might be said for Lindy Lee, whose $14.5 million public sculpture for the National Gallery of Australia entails more design than hands-on involvement. More traditional sculptors believe the actual making of a piece is crucial, whether it requires carving, casting, or welding. Healy and Cordeiro allow themselves the conceptual freedom to defy definitions and work with found objects, collage, photography, video, installation and even Lego.

In this show, a deer, a seal, a lion and a manta ray are constructed from Lego bricks and combined with rudimentary bits of furniture. They portray a relationship with the natural world that has grown profoundly unnatural, as exotic animals become decorative household objects made from brightly coloured bits of plastic – a substance that now qualifies as one of nature’s biggest headaches. 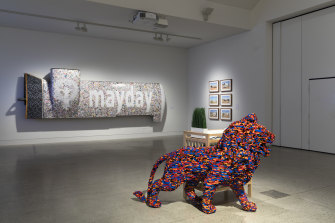 In the world Healy and Cordeiro explore, we make a fetish of nature while our physical involvement is strictly limited. Nowadays we are all would-be environmentalists, lovers of wildlife and forests, but we generally prefer these things in virtual form. It’s torture for people to switch off the mobile phone, even in a movie, let alone visit bushland where there’s no reception.

In Block Party (2021), the artists have worked with school children, getting them to paint landscapes and other images on the backs of decomissioned mobile phones. They may be hinting that we should start looking and stop snapping. How many of the landscapes captured on mobiles will ever be looked at again? Or indeed, were looked at in the first place?

Healy and Cordeiro are not going to persuade us to throw away the devices and abandon our blind faith in progress. They are just as addicted as everybody else, although conscious of the social predicament that’s emerging. If we wanted to pinpoint only one example of technological progress being taken as an article of faith, it’s hard to go past the government’s “plan” to reach zero emissions by 2050, which is vitally dependent on technological applications that don’t yet exist.

The dromological view is that the speed of life is increasing at a rate that far outstrips our abilities to adjust. Each technological advance is greeted like a miracle, but soon becomes a psychological necessity. We believe in technology in the same way people in the Middle Ages believed in magic or witchcraft, angels and demons, with the spread of bizarre conspiracy theories on social media confirming we’ve never outgrown the medieval mentality. The title of the show, Post-haste, suggests a stop or a pause, recently supplied by the pandemic. We don’t appear to be coming back from that forced break in a more reflective frame of mind.