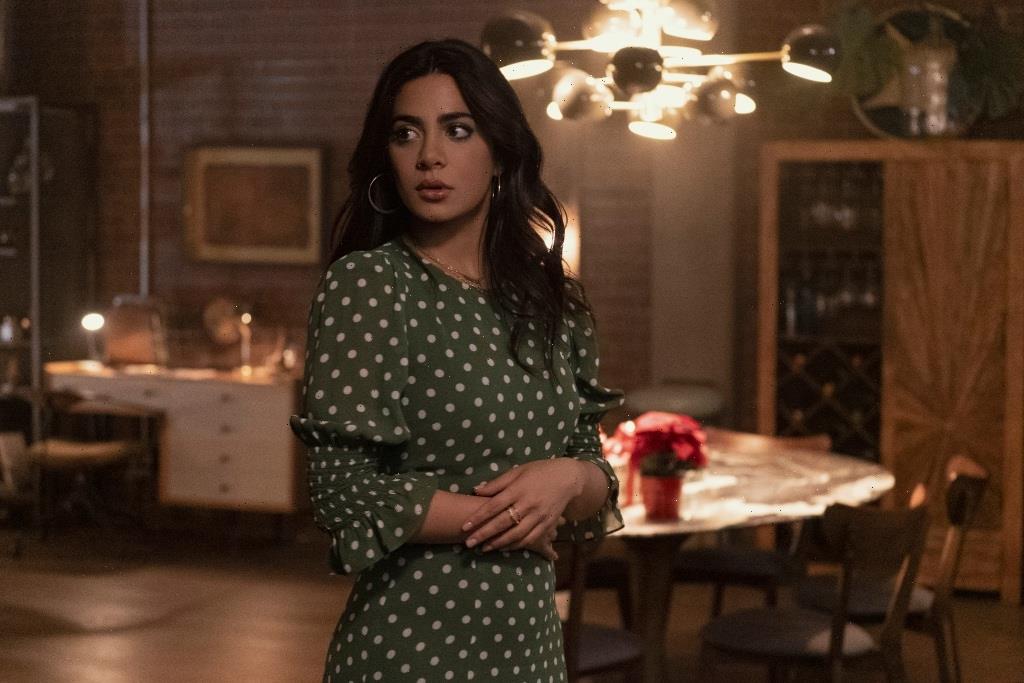 There a few performers’ names who, when you hear them, sound synonymous with holiday-themed television. This year, Emeraude Toubia should one of them.

The former “Shadowhunters” star traded stunts and sci fi for cozy sweaters and the new relationship ups and downs of both Lifetime’s “Holiday in Santa Fe” and Amazon Prime Video’s “With Love.”

Working on two holiday-themed projects back-to-back may not have been an entirely intentional career move, but when Toubia learned the details of both — from her character to the teams behind the scenes — she knew she had to go for them. “Holiday in Santa Fe,” which airs Dec.10 on Lifetime, was written by comedian Cristela Alonzo, directed by Jody Margolin Hahn and produced by Mario Lopez, who also stars as Toubia’s on-screen love interest. She co-executive produces that movie and also plays a greeting card executive named Belinda who travels to the titular Santa Fe to acquire a small, family-run ornament company. In “With Love,” Gloria Calderón Kellett’s first new series under her Amazon deal, Toubia plays Lily, a young woman looking for love and purpose throughout the year, experiencing a few different romantic encounters along the way. The five-episode series starts at the winter holiday season and comes full-circle after traveling through a calendar year.

“Mario’s team approached me to see if I wanted to be his co-star. And I absolutely said, ‘Let’s do it, but I want to also produce.’ It’s a full Latino cast and I said, ‘I want to give my input and talk about my family and bring my vision also.’ And they were extremely accepting,” Toubia tells Variety of working on “Holiday in Santa Fe.”

Two weeks after she was offered that film, the “With Love” offer came through. She had auditioned for that role, connecting with the character of Lily because she is a “cocktail of emotions” but also “a family girl.”

“This this journey with Lily is about finding yourself, about committing mistakes, about a character being human, and I think a lot of girls and women are going to connect with that,” she explains. “We’re all looking for love and she is having a hard time finding it. She breaks up with her perfect-on-paper boyfriend and sometimes it’s hard to do that — we have social pressure, family pressure on what they expect from us.”

“I do constantly feel a pressure from my mom,” she admits. “She keeps asking me ’til this day, ‘When are you going get pregnant?’ There is a pressure of constantly trying to make sure your family feels proud of you — they work so hard for you to get where you’re at. I want that validation, but sometimes you need to understand that as a person, you can set your own rules in life and you don’t have to follow your family’s traditions. You can respect and understand their traditions, but it’s your life, they’re your rules.”

Chemistry between on-screen family members and on-screen love interests is key in both projects, and when it come to the latter, Toubia says there simply “has to be a spark” in order to get into her character’s mindset.

Toubia shot the two projects back-to-back with only a few weeks in between to decompress from “Holiday in Santa Fe” and prepare for “With Love.” The latter experience, she notes, was “on a whole other level,” in part because of the scope (“We had all five episodes before we started shooting,” she recalls), but also because it was a bigger budget (“I had a rain scene! Do you know how expensive those are?” she gushes) and more responsibility. Toubia was No. 1 on the call sheet and did not take that lightly.

“Every time there was a new character, whether it was an extra or whether it was a leading character, I made sure to introduce myself to make them feel welcome because I want to set the tone,” she says. “Acting is not an easy. There’s so many ‘Nos.’ We’re judged constantly with our tapes, with how we look physically, with how you’re not Latina enough, how you’re too Latina. So [important] to me, more than anything, is setting a good a good energy on set and making everyone feel welcome.”

Working with Calderón Kellett provided Toubia with additional new opportunities, such as adjusting to revised dialogue on the fly on set. With her background in multicam (as the co-creator of the Netflix-turned-Pop “One Day at a Time” reboot, for example), Calderón Kellett is used to tossing out alternate lines of dialogue while filming. Even though “With Love” is a single-camera project, “Gloria was on set every day, the first one in to the last one out. So every time a joke just wasn’t working anymore — maybe it worked the first three times and we want to try something different — she was there to give us new notes, to give us adjustments, to reset and start fresh,” Toubia says.

Embarking on these projects, Toubia was most excited to “represent women like me — Latinas like me — in these two vastly different, even though they are holiday-themed, characters,” as well as work on a “diverse, multicultural show that doesn’t highlight trauma — that highlights people as multi-dimensional characters.” Getting to channel some of her personal favorite rom-com inspirations was a bonus.