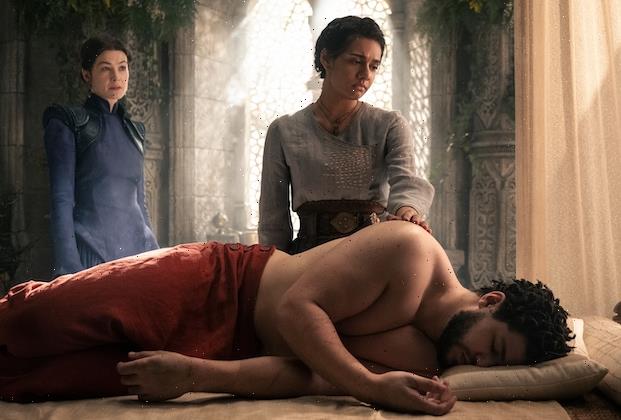 When it comes to Dragon Reborn candidates, The Wheel of Time‘s Moiraine has been making a list and checking it twice — and in this exclusive sneak peek, Perrin rises a notch or two in her rankings.

When last we tuned into Prime Video’s adaptation of the Robert Jordan novels, the Children of the Light had captured both Egwene (Madeleine Madden) and Perrin (Marcus Rutherford). Convinced that Egwene can channel, Eamon Valda set out to torture Perrin until his traveling companion affirmed her abilities. Perrin begged Egwene not to work any magic, but she did let loose with but a wee fireball — one that flitted off Valda’s chest, but landed on and burned through Perrin’s bindings.

Perrin, meanwhile, responded to Valda’s brutal maiming of his flesh with golden, glowing eyes that caught even Egwene by surprise. As he rose up against a surprised Valda, Egwene sneaked up on their captor and plunged a blade into his shoulder. The two then fled the tent and headed for safety, discovering along the way that the vicious approaching wolves heeded Perrin and helped clear a path for the travelers!

In the sneak peek above from this Friday’s episode, “The Flame of Tar Valon,” Moiraine (Rosamund Pike) hears tell from Egwene of Perrin’s own powers, and then issues Egwene a firm warning to tell no one. Moiraine also gives Egwene some cryptic instructions relating to her next move…. Press play above to hear what they are!

Elsewhere in Episode 6 of Season 1: Moiraine faces the consequences of her actions, Mat faces the darkness in himself, and Egwene faces the most powerful woman in the world.

Want scoop on The Wheel of Time, or for any other show? Email InsideLine@tvline.com and your question may be answered via Matt’s Inside Line.