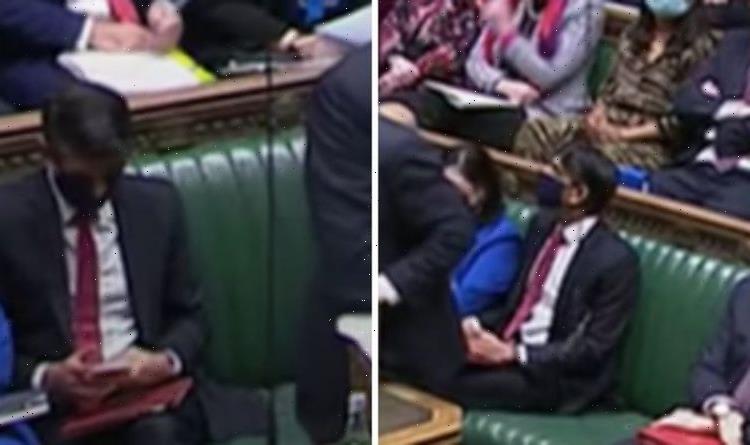 It was Boris who addressed the British public, but all eyes were on Rishi. Body language expert Judi James exclusively spoke to Express.co.uk about the Chancellor of the Exchequer, Rishi Sunak’s telling demeanour.

Judi stated: “As Boris fought off criticism over the No 10 party furore today there was a suggestion in the Commons that the Tories were keen to provide an impression of solid unity for their beleaguered PM.”

However, the Chancellor of the Exchequer seemed less than impressed during the question time.

Despite being placed in the “wing-man seat”, directly beside Boris Johnson, it appeared that the politician would have rather been anywhere else.

He did not provide the “big guns” that the Prime Minister was hoping for today, but rather “suggested an air of disconnect rather than active support”.

His body language did not convey any sense of being relaxed or confident.

His eyes rarely stayed still and his head darted around.

Judi explained: “At times his head was bowed so low his face was invisible to the cameras.

“When he did raise his chin it was to either glance around at his surroundings with an air of what looked like curiosity or to stare down at his hands as though trying to be invisible.”

Perhaps the Chancellor of the Exchequer was listening intently to the speakers’ points.

Or was he cringing at the backlash his Prime Minister and party were receiving?

Everyone wore masks at the event, so Rishi’s face was 50 percent obscured by this.

However, “there were few, if any, signs of the kind of eye-smiles or nods that might have suggested support and endorsement”.

Judi said: “Rishi was seen studying his phone but he also placed his hands on the folder on his lap with the fingers loosely meshed together in a rather elegant-looking gesture that can also signal an air of calm detachment. It suggested a lack of desire to join in, more of a calm, bland, ‘holding’ gesture that someone might perform when not personally involved in a discussion.”

She remarked that Boris “looked openly awkward, standing with his own head bowed or sitting with his arms folded and head down in a double barrier gesture”.

She concluded that his right hand man, Rishi, looked subtly so, “like a man who was likely to have preferred to be elsewhere”.

When the Prime Minister was urged to boycott the olympics in China, Rishi was seen instantly grappling for his mobile phone.

Martyn Brown, Senior Political Correspondent at the Daily Express, tweeted: “Rishi Sunak furiously typing away on his phone during #pmqs. Quite possibly the fastest smartphone-typist I’ve ever seen.”

Jon Sopel tweeted: “Am wondering whether @RishiSunak chose the biggest face mask he could find so his expressions couldn’t be read while listening to @BorisJohnson at #PMQs.”

Livia Augusta replied to his tweet, stating: “He sat very still indeed. Not much nodding as encouragement for Johnson. He was probably having a nice daydream planning his leadership campaign.”