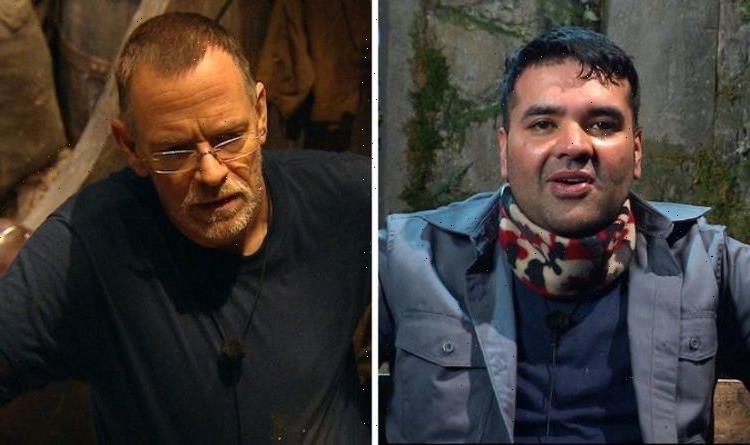 EastEnders veteran Adam Woodyatt, 53, was the latest famous face to have words with the musician, 40, over his lack of help with the chores they shared on I’m A Celebrity… Get Me Out Of Here!. Wednesday’s episode of the ITV show brought viewers up to date with the latest goings-on at Gwrych Castle where the campmates reside, and the La La La artist found himself in a dispute with Adam after he’d failed to help him out with the responsibilities they were assigned to.

After he recently butted heads with Frankie Bridge, Kadeena Cox and David Ginola, it was Adam who became frustrated with Naughty Boy on Wednesday.

As the celebrities began to wake up, Naughty Boy explained that he’d had a bad night’s sleep.

He commented: “The door to go to the toilet is right in front of my bed, it doesn’t close properly and it was freezing last night.”

He added to David: “It’s not fair. I need to have some rest.”

Adam decided to go ahead with the chores without Naughty Boy, who was supposed to be helping him.

The Ian Beale star explained: “I got up this morning. I think I was the first one up.

“I’m on cleaning duty – I share with Naughty… except he was in bed.

“I just cracked on and did everything except the privy.”

He continued: “Seriously, Naughty’s going to wake up and there’s going to be nothing for him

“He might as well stay in bed all day.,” Adam said, sarcastically suggesting Naughty Boy was being lazy, before adding: “Oh… he is.”

Venting in the Telegraph, Adam added: “Being in here, it does magnify things.

“It does affect your reactions to things and simple tasks.

“Especially when the person you’re supposed to be doing them with is in bed.”

Adam was quick to inform Naughty Boy about the inconvenience once he woke up.

The DJ stated he’d had a bad sleep and remarked: “It’s not the end of the world, Adam.”

Despite the new tension between the two, they later had a chat and agreed to put it behind them.

Adam admitted: “I cracked on and did all the chores without giving you a chance.

Naughty Boy replied: “Not really. I didn’t have a good sleep. I don’t know if you were listening to me.

“I didn’t sleep well, that’s why I was up late.

“It’s not necessarily about you doing the chores, you like doing chores, you made me feel bad about not doing them.”

“I didn’t mean to make you feel bad,” the actor replied.

“Start again?” Adam added and the pair fist-bumped to mark their resolved spat.

I’m A Celebrity… Get Me Out Here! continues on Thursday at 9pm on ITV.