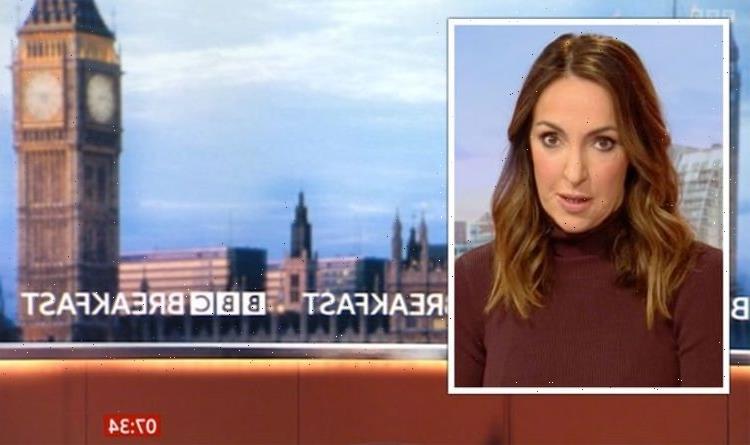 BBC Breakfast presenters Jon Kay and Sally Nugent made it clear they weren’t impressed with Sajid Javid on Wednesday morning after he dropped out of an interview. The BBC news show usually features an interview with a government minister, however the presenters revealed they’d been told none were available on Wednesday morning. This comes after a video was leaked showing some Downing Street officials joking about a Christmas party last year. Sally and Jon called out government ministers for not making themselves available to answer questions.

After interviewing Labour politician David Lammy, Jon explained to viewers there would be no government ministers on the show.

He revealed: “We would normally speak to a minister at 7:30 here on Breakfast this morning and ask questions like that and hold to account.”

Jon agreed: “Every day, pretty much every day.”

He went on to reveal they had initially expected Sajid Javid to make an appearance on the programme.

Jon explained: “We were hoping that this morning Sajid Javid Health Secretary would be available to talk about the anniversary of the vaccination campaign.

“He’s not joining us this morning and we’re not expecting any other government ministers now at 7:30,” he said.

Sally then made a call to all government officials, urging any who were willing to come on the programme.

“We’ll make time, we will shuffle things around,” Jon insisted.

“We’re keen to ask the questions that lots of you are asking this morning about that Christmas party,” Jon told viewers.

When the time did reach 7:30am there were still no government ministers who had made themselves available to be interviewed on the programme.

BBC Breakfast decided to highlight this by showing footage of an empty studio where Sajid Javid should have been.

Jon said: “What does the government say? Well usually at this time here on Breakfast we would be able to put your questions to a government minister at Westminster as part of a slot, well we’ve had it on the programme pretty much every morning haven’t we, at 7:30 since the start of the pandemic?”

Sally continued: “Yes, we had been hoping to speak to the Health Secretary Sajid Javid about the first anniversary of the Covid vaccine rollout.

“However, this morning, no one has been made available to speak to us.

“So, this is the shot of our Westminster studio that we would normally show you at this time.

“It’ll be very familiar to you, it’s where you see the government ministers sitting at this time on our programme most mornings of the week.

“But, as you can see, there’s nobody there today,” she told viewers.

Jon added: “And that’s very unusual. The camera is ready, the seat is there, we can take an interview at any moment.

“So, if anything changes between now and 9:15 or later in the day on the BBC News channel, we would love to hear from the government,” he concluded.

BBC Breakfast airs weekdays at 6am on BBC One.