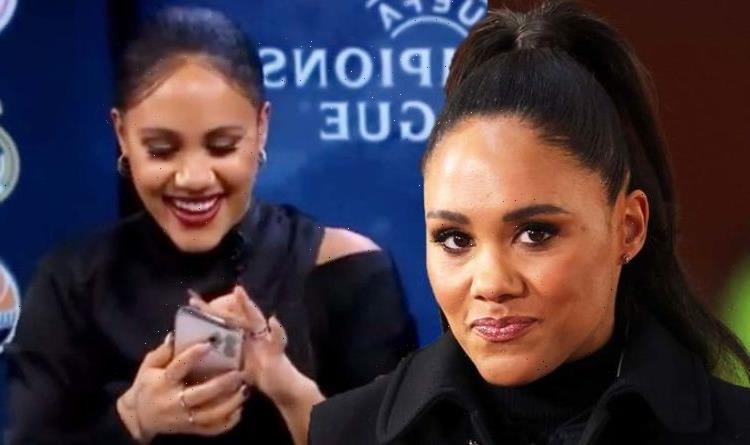 Alex Scott, 37, was left red-faced after her CBS Sports Golazo co-star, Jenny Chiu, exposed that she had not followed her back on Instagram. The former Arsenal football star shared the hilarious moment on her Instagram stories as she promised to make it up to Jenny.

It happened as Jenny was reporting from the pitch and thanking Alex for her support while working together.

She said: “I learned so much from you, so thank you inadvertently, but I’m still waiting for that Instagram follow-back.

“Is that ever coming?” Jenny enquired.

The pundits covering the Champions League match back in the UK immediately erupted in laughter as they joined in on teasing Alex.

She said: “I’ll get you right now, Jenny.

“We can be Insta-friends, Jenny.

But Alex’s co-stars called for “proof” that she had indeed followed Jenny on Instagram.

Alex insisted: “Wait! I’m getting it!

As Alex raised her phone in the air, the panel started celebrating and chanting while Jenny put her hand in the air in a sign of victory.

The clip, which was shared with Alex’s 671,000 followers, was captioned: “@jennyachiu when I come over in the NY dinner on me.” [sic]

Alex made history this year by becoming the first female presenter to host Football Focus in the sport show’s 47-year history.

More recently, the star presented her new game show called The Tournament, which airs on the BBC.

However, she confessed her busy career has been a “struggle”, as she is a “people pleaser” and doesn’t put her well-being first.

“Just last week I listened to a really great Ted Talk podcast about meetings and owning your time,” Alex said.

“I’m a bit of a people pleaser and I often say yes to everyone and try to be at everyone’s meeting when, actually, it’s about prioritising what I need to do for my own health as well.”

She added to the Stylist: “Everyone thinks that their meeting is the most important, but I’m spinning 10 different plates.

“So, it’s about prioritising and trying to reschedule.”