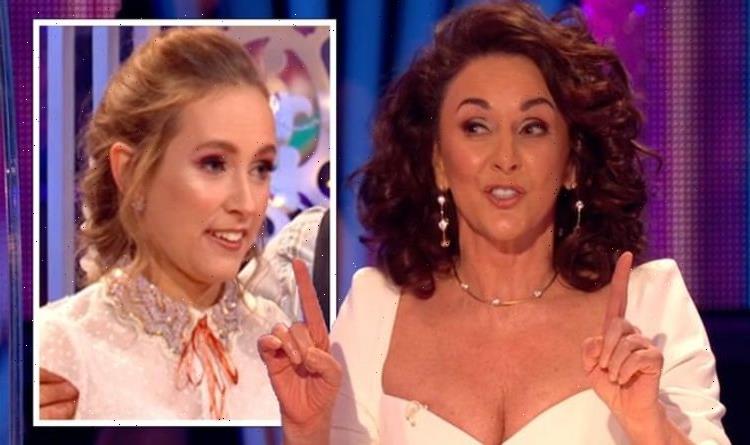 Strictly: Giovanni says ‘I love you’ to Rose Ayling-Ellis

Strictly Come Dancing star Rose Ayling-Ellis impressed viewers with her American Smooth on Saturday night’s quarter final. However, some fans were confused when Shirley Ballas made an unusual comment while praising the actress for her performance. Head judge Shirley congratulated Rose for “blocking out” the noise in the studio, however fans were quick to point out the sound wouldn’t have affected the EastEnders star as she’s deaf.

Rose has made Strictly history this year by becoming the first deaf contestant on the BBC dance show.

However, on Saturday evening viewers seemed to think Shirley had forgotten this fact.

After watching Rose and her professional partner Giovanni Pernice dance to Natalie Cole’s hit track This Will Be (An Everlasting Love), Shirley praised the couple for their performance.

The Strictly judge said: “Before Rhys went on before you there was lots of noise and clapping, you came in, you blocked it out and you delivered a performance of a lifetime.

“You had beautiful footwork, your posture was outstanding. I think if we slow that lift down, at the end you will see that there is a point in mid-air where you are not touching each other.

“That truly is a leap of faith and that’s what we mean by taking it up a notch, show us something you haven’t done before.

“I had to double check but Shirley did say to Rose well done for blocking out the noise and carrying on, did she forget that Rose is deaf? #Strictly #Strictly2021 #StrictlyComeDancing,” @Shirleyccr questioned.

“Somewhat crass of Shirley to mention Rose and being able to turn off the noise. Does Shirley actually understand Rose is deaf? #strictly,” @Braceletbay wrote.

@sparklisarah said: “Did Shirley congratulate Rose for blocking out the sound? #Strictly.”

“Shirley talking about there being lots of noise and clapping after Rhys had danced and Rose blocking it out… she is literally deaf Shirley???? #Strictly,” @morganmacfie commented.

However, some viewers came to Shirley’s defence, pointing that her comments were just a poor turn of phrase.

@kama1_87 said: “It’s a figure of speech. Pretty sure Rose knew exactly what Reece did and blocked it out all the same…” (sic)

“Ok so maybe Shirley’s comment to Rose about ‘blocking out the noise’ wasn’t the greatest thing to say but before the world gets all wrapped up in it and forces her to apologise can we just remember that she’s a human! Humans make mistakes sometimes! It’s life! #Strictly,” @RedshawReads added.

It was clear Rose impressed the judges with her performance as she received a nine and three tens from the judges, totalling an almost perfect score of 39.

Many viewers are beginning to speculate about who will lift the Glitterball Trophy this year as there’s only five couples remaining in the BBC dance contest.

According to bookmakers Ladbrokes, it’s looking good for Rose as they have her down as the clear favourite to win with odds of 1/5.

Fans will have to tune in for Sunday night’s results show to find out if Rose and Giovanni make it through to the next round of the competition.

Strictly Come Dancing continues Sunday at 7:20pm on BBC One.