A study from Singapore has found higher levels of fitness among people who do their own housework. Those who tackle “high intensity” tasks such as cleaning windows achieve particularly high levels of physical health and improved mental facilities.

This mental stimulation doesn’t surprise me. Attempting to change the doona cover often leaves me entirely submerged in the thing, my hands holding the inside corners, wondering what to do next. I’m pretty sure the widespread belief in ghosts stems from a handful of householders who’ve become permanently entangled in their doona covers. 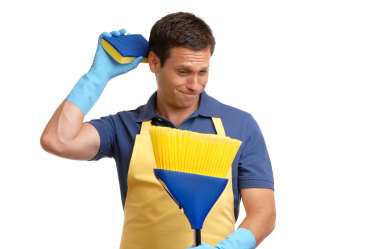 A new study from Singapore has found there are physical benefits to doing housework and Richard Glover finds there are mental and emotional benefits too.Credit:IStock

Stacking the dishwasher is worse, with a hundred possible solutions to the problem of fitting everything in, only one of which is judged correct by other household members. Has ever a dishwasher been stacked without someone saying: “Not that way, you’ve got it all wrong?” It’s like a Rubik’s Cube, with only one possible solution.

Apparently, the tall plates must be installed on the edges, the smaller plates in the middle, and you can’t leave the top of the steamer connected to the bottom of the steamer, as they won’t wash properly.

I have this on the authority of Jocasta, a woman who failed Domestic Science at school after being asked the order in which the washing up should be done. It was a question designed to produce the reply: “first, wash the glassware”; instead of which she answered: “first, place the plug in the sink.”

She may not be the domestic authority she claims to be.

The bathroom leads to further disputes. It’s my belief that every time you have a shower, the shower has a shower. Jocasta, alas, believes the thing also needs to be cleaned, a task I achieve by stripping naked, dropping to my knees, and going hell for leather with a bucket of suds and a scrubbing brush, my backside waggling from side to side as the shower blasts away the suds.

Jocasta enjoys the sparkling shower recess that is created, but remains uncertain whether it’s worth the traumatic memories. Apparently, there are some things that, once seen, cannot be unseen.

Cleaning windows gets a special mention in the Singaporean study and little wonder. It’s impossible to achieve a good result. I work hard at it, spraying on the fluid, then scrubbing away with a crumpled sheet of newsprint. It looks spotless until the sun hits the next morning upon which it looks like early Jackson Pollock.

I then wash it all over again, which only serves to move the swirls from one place to another. Maybe I’m using the wrong section of the Herald.

Later I’ll sweep the house, creating a pile of dog hair so unfeasibly large that I wonder if there’s anything left of the dog. What’s he been doing? Applying Nair? Maybe I could sell his hair for wigs and turn a profit.

The British writer and eccentric Quentin Crisp famously claimed that if you don’t dust for four years, further dust will not accumulate. I don’t know if this is entirely true. I have memories of student houses where the nature of the floor covering was uncertain, so complete was the coverage of motorcycle parts, pizza boxes and general filth.

I remember the moment someone moved a pizza box, and exclaimed: “Hey, there’s a carpet under here.” Nature abhors a vacuum and so did these young men.

The toilet was worse. Every time I hazarded a visit, I remember optimistically wondering whether “Putrid Black” was just another colour in the Fowler Ware range.

Later, I hope those chaps realised one of life’s great truths: romantic partners tend to respond best to people who perform an equal share of the household tasks. Certainly, Jocasta’s erogenous zones have long included the kitchen floor, the back bathroom and the lint filter in the dryer.

In fact, after ironing her shirts, I always spray a bit of Fabulon behind my ears, which I find works better than those pheromones they used to promote in the back of magazines. Just as promised in the pheromone advertisement, she falls into a swoon without quite knowing why.

Yet now, courtesy of the Singaporean research, there are even more reasons to throw yourself into the housework, becoming healthier and more acute with every task.

Reordering the Tupperware drawer might be a good start, as it tends to involve a lot of crouching, standing and then crouching again. Afterwards, there’s the moral and intellectual tussle of whether to throw out the lids that have no bottoms, and the bottoms that have no lids, or wait to see if they turn up.

Better still, the Singaporeans could include a few outdoor tasks.

By never having the lawnmower serviced, I have cleverly created a system in which start-up involves two hours of sweat-inducing cord-pulling each Saturday morning. Even better, by making sure all my tools are blunt, rusty and ill-maintained, I manage to turn the simplest household repair into an all-day nightmare involving shouting, swearing, and the puncturing of at least one high-pressure pipe.

That’s the thing about housework. As the Singaporeans know, you’ve got to use both your body and your brains.

In need of some good news? The Greater Good newsletter delivers stories to your inbox to brighten your outlook. Sign up here.