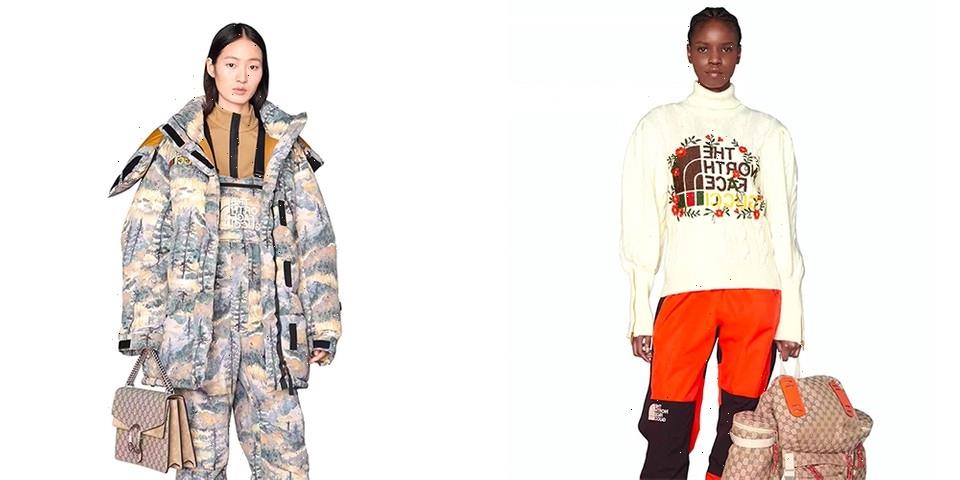 This is not a drill: Gucci and The North Face are back together for their shock second drop. Chapter two of the collaboration between the Alessandro Michele-helmed house and the outerwear giant that is TNF continues to explore the limits of tradition, on both brands’ front, while a new forest print is found alongside geometric designs and plenty of logomania.

Like the ’70s-inspired drop that came before it, this second collection is incredibly extensive. 130 different items appear across both men’s and womenswear, with the majority focused on that standout forest print. It adorns everything from a jumpsuit to T-shirts, belt bags, padded jackets, hoodies, tracksuit zip-ups, silk shirts, nylon pants, gilet-style down vests, and more.

For fans of logomania, Gucci plasters an equally large array of garments with its interlocking “GG” motif, while the signature The North Face x Gucci hybrid logo adorns plenty of the former’s classic jacket styles, with it appearing again in other more colorful forms on bright block-colored down jackets.

Jogging pants and dresses are covered in a custom Gucci floral print that features the interlocking logo in its print alongside nods to TNF throughout, with embroidery appearing on the trousers for example. And as for the boots, which are the same as last seasons, Gucci drops them in new iterations decked with colors such as orange with a Gucci logo-covered mid-section made from its original canvas, or another version in block green.

More footwear appears in the form of canvas-covered slides, beige merino wool-packed slippers (with the same material also reworking the slides) and more, while a cat motif has also been added to a variety of essentials such as T-shirts and hoodies.

This season, there are no particular standouts, rather a collection that presents itself as one very strong entity. Lace skirts meet ’80s ski-inspired jumpers and balloon-sleeve knits, ugly Christmas sweaters make an appearance too, or you could opt for a sporty look with its range of cropped tops and bike shorts or leggings.

Take a look at a selection of the Gucci x The North Face pieces above, and shop the entire range on Gucci’s site now.