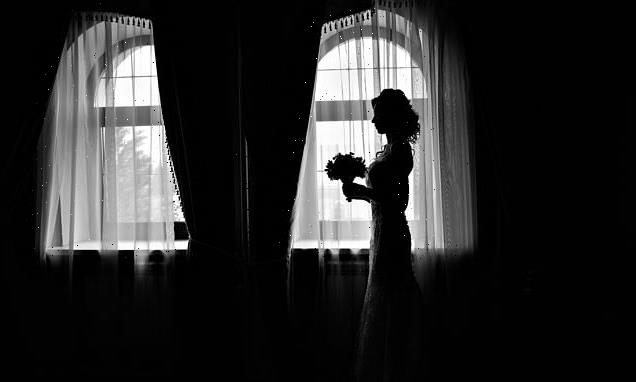 A woman who wants a low-key wedding ceremony with eight close friends in attendance has asked if she and the groom are in the wrong to not tell their siblings about the nuptials.

Taking to the British parenting forum Mumsnet, the anonymous woman explained that it will be her second marriage and her partner’s first, and as well as not having the budget for ‘pomp’, they’re forgoing all the traditions like hen and stag dos and a wedding reception.

She explained that they plan to go for afternoon tea after the ceremony with their eight friends, and then stay overnight at a country hotel with another couple, but when they told people about their plans, they said it would be ‘sad’ not to have family there.

The bride-to-be explained that both sets of parents have passed away, but inviting their siblings and respective partners would swell the numbers by an extra 15 to 20 people.

Commenters were divided with many advising against not inviting families and warned that the secrecy would damage relationships, while others said they should at least inform their siblings, and some supported the couple’s decision and said they should do as they please. 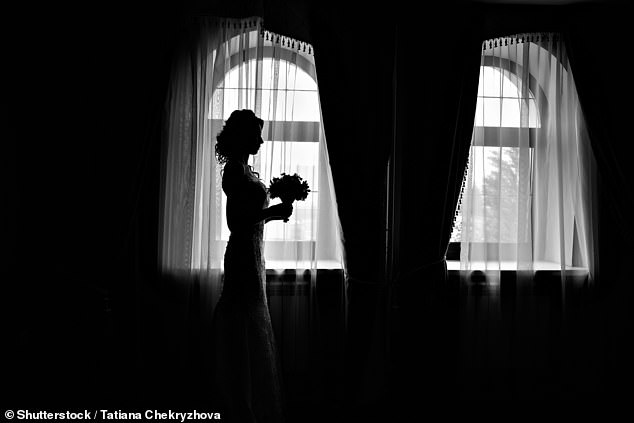 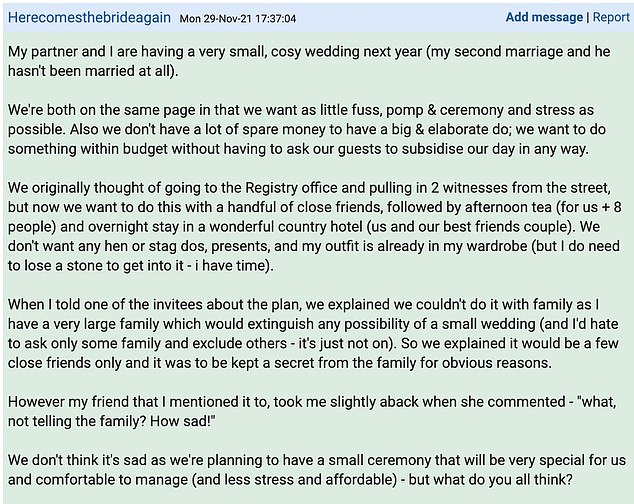 The woman, who revealed that the wedding is going to go ahead next year, said: ‘We originally thought of going to the Registry office and pulling in two witnesses from the street, but now we want to do this with a handful of close friends, followed by afternoon tea (for us + 8 people) and overnight stay in a wonderful country hotel (us and our best friends couple).

‘We don’t want any hen or stag dos, presents, and my outfit is already in my wardrobe.

‘When I told one of the invitees about the plan, we explained we couldn’t do it with family as I have a very large family which would extinguish any possibility of a small wedding (and I’d hate to ask only some family and exclude others – it’s just not on).’

‘So we explained it would be a few close friends only and it was to be kept a secret from the family for obvious reasons.’

‘However my friend that I mentioned it to, took me slightly aback when she commented – “What, not telling the family? How sad”.’

She later revealed that both sets of parents and grandparents have passed away, but people were still confused as to why they wouldn’t share their special day with people in their family.

One commenter said, ‘I think it depends on how close you are to your family and how you want the relationship to be in the future. I’d be hurt to be told after the fact about a sibling’s wedding.

‘The secrecy of it would bother me more than missing the wedding and it would probably permanently hurt the relationship. Not out of spite, but having something as big as a marriage kept secret would tell me that we’re not that close anymore, so I would withdraw. Why can’t you tell them that you are having a small private wedding?’

Another person warned of the repercussions, saying: ‘It’s your wedding but you need to brace yourself for the fallout from both families.’

‘Why can’t immediate family come to the registry office too? Prepare for your family to feel very hurt/insulted. I’d love to have had a tiny fuss-free wedding like yours, but I’m not sure I could have handled the fallout.’

A third person agreed, ‘I think it will put a massive strain on your sibling relationships. That may or may not matter to you both, I don’t know what your relationships are like already.’

One commenter confessed, ‘The secrecy element makes me feel uneasy. You are being underhand rather than open. If it doesn’t seem a big deal to you why the need to be sneaky?’

‘Personally I wouldn’t want my wedding to be a source of controversy or hurt. I’d probably do the two witnesses thing. It is your choice though, don’t get me wrong- just be prepared for them to be hurt.’

Others were in support of the couple and stated that people should be allowed to have the wedding they desired rather than catering to others’ feelings.

One explained that both her mother and sister had married secretly, even though she was very close to both of them, and it ‘didn’t bother her in the slightest’.

Another added: ‘Do it. We did similar and nobody kicked off. If they had, the would have been ignored.

And a fellow supporter said that the amount of money and fuss surrounding weddings is often ‘vulgar’ and that their plan sounds ‘much nicer’, saying: ‘You should do whatever makes you happy.’

They added: ‘If other people have a problem with it, it shows they don’t really care about your happiness.’ 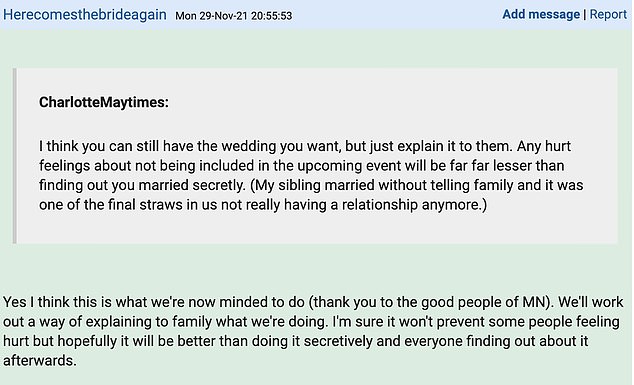 Replying to a comment that informed the woman that her family would likely be hurt, the fiancé revealed that she had changed her mind

One person was supportive yet still had some doubts, saying: ‘If your grandparents and parents aren’t alive, then I don’t see anything wrong with what you are doing.

‘I would be devastated though if my sis got married and put friends above me in priority for invites. If you aren’t close to your siblings though it doesn’t matter.’

In a follow-up post, the bride-to-be wrote: ‘We’ll work out a way of explaining to family what we’re doing. I’m sure it won’t prevent some people feeling hurt but hopefully it will be better than doing it secretively and everyone finding out about it afterwards.’