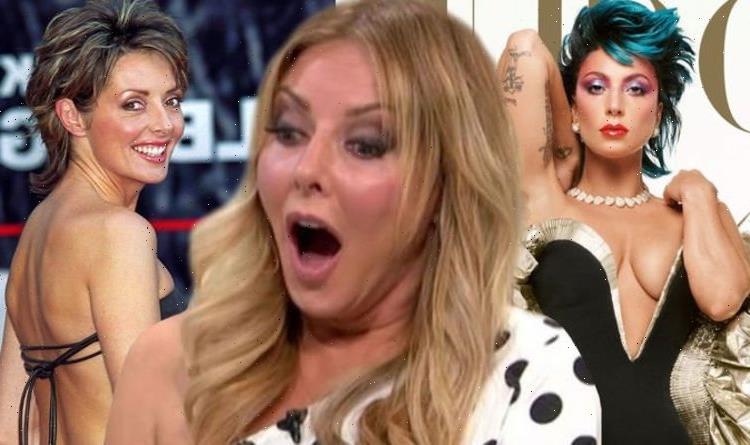 Carol Vorderman admits she's been 'out of sorts'

Carol Vorderman, 60, was overjoyed to have been mistaken for Lady Gaga, as the singer stunned on the cover of British Vogue. The Countdown star admitted she “wished” the pair looked alike, but it seemed someone believed their looks were uncanny.

Taking to Instagram, celebrity make-up artist Alexis Day, shared a snap of Gaga on Vogue and revealed her surprise that it wasn’t who she thought it was.

The pair seemed to rock the same 80s style hair-do; a long pixie-cut with streaks of colours run through.

She penned: “On first glance I swear I thought this was the legend @carolvorders.

“But apparently it’s Lady Gaga, who may be channelling some classic 80s vorders.

“British Vogue I really think you need #CarolVorderman on the cover tbh instead of Madge.”

She followed it up with another post where she compared the singer to an older photo of the presenter, branding them “twins”.

After receiving the notification, a stunned Carol replied: “I wish!” alongside a laughing face and a wide-eyed emoji.

Elsewhere, Carol shared her dismay after Steps had to cancel their Cardiff show this week due to the rise of Covid cases.

The musicians announced the sad news on their own social media page, which the Countdown legend shared.

Addressing their fans, the musicians wrote: “Hi everyone, unfortunately we now have further positive Covid-19 cases in our touring party which have made continuing with the ‘What The Future Holds’ tour impossible.”

The band added that “for the safety of everyone” they were going to reschedule that one and tonight’s Bournemouth show to summer 2022.

The band added: “We appreciate your continued support and hope you will join us in wishing those affected a speedy recovery.”

Some fans were highly encouraging of the band’s decision, with Jbtiger1992 replying: “Never apologise for wanting to keep yourselves and Steps fans safe during this difficult time.”

Carol expressed her own disappointment, revealing that she had plans to dress up but these were foiled by the postponement.

She said: “A big gang of us were off to see @officialsteps tonight but sadly Covid won and the show has been postponed…

She playfully attached the song Tragedy by Steps to the story.