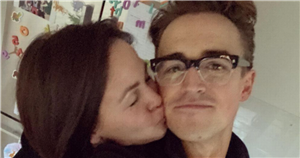 With less than a month to go until the big day, millions of us will likely be using the coming weekend to dust off the Christmas decorations and deck the halls.

Tom Fletcher and his wife Giovanna are already ahead of the curve and have already transformed her home for the festive season.

The family have kicked off the Christmas festivities with a beautiful display at her Northwood home.

The Strictly Come Dancing star showed off their impressive display and decorations with fans via her social media channels.

Tom uploaded a video of the ornate set up with fans on Instagram, thanking the professionals who brought the amazing spectacle to life.

Everything featured in the pictures is available to book via the award winning The Early Hours company, who are experts in seasonal decorating and floristry.

Alongside the photos, he wrote: "When @earlyhoursltd bring Christmas they bring CHRISTMAS! Thank you SO MUCH! You are the absolute best. Can it stay all year please?!"

Tom has more time on his hands since leaving Strictly Come Dancing after failing to make it through the public vote with his dance partner Amy Dowden.

Show judge Shirley Ballas has said she's "disappointed" that Tom Fletcher was voted off the competition so prematurely.

Tom and his dance partner Amy became the eighth duo to leave the competition, a move that the Strictly judge thinks was a mistake.

Appearing on Loose Women last week (November 22), judge Shirley admitted that she was disappointed to see Tom and Amy go, after noting on the results show she would have saved the couple if the decision had come down to her.

“I mean, I didn’t think he was a little bit in front,” Shirley told the Loose Women panel. “I thought he was quite a way in front.

Sharing her thoughts to Tom and Amy's dance to On My Own from Les Misérables for this year’s Musical Week, Shirley recalled: “I thought it was synchronised, it was beautiful.

“It was emotional. I thought he brought it at the end.”

The couple scored a 32 with their couple’s choice dance on Saturday night, which Tom dedicated to his musical theatre star sister, Carrie Hope Fletcher.

When asked about his time on the show, the 36 year old musician said: “Honestly I’ve had the best time, I’ve loved every second of it.

“I’ve made the best friend in Amy, you’ve been amazing thank you so much for teaching me how to dance, I know it was a struggle at times."