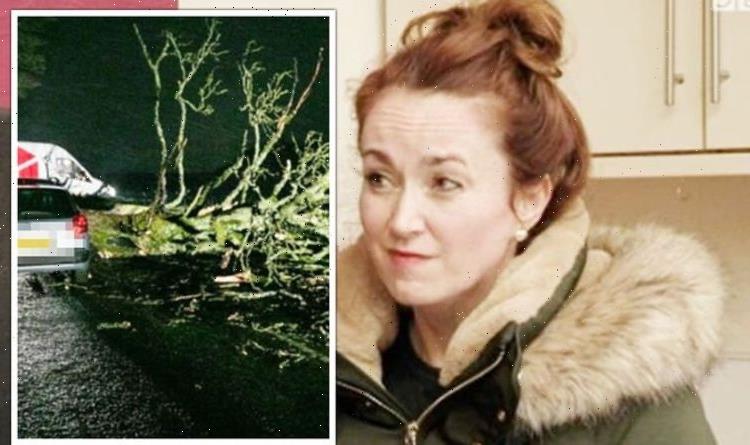 Homes Under the Hammer: Martel Maxwell 'struggles' with lines

Martel Maxwell has taken to Twitter to detail her struggles at home in the wake of Storm Arwen. The Homes Under The Hammer presenter revealed she has spent a fifth night without power.

The 44-year-old resides in Scotland with her husband Jamie Parrat and their three children.

It comes as thousands of people have spent a few days without water or electricity after bad weather conditions.

The north-east of Scotland remains the worst hit, with police declaring a major incident in the area due to the widespread disruption.

Areas of Moray, Angus, Perthshire, Dumfries and Galloway and the Borders are also affected.

In the early hours of this morning, Martel detailed her home troubles in view of her 12,000 followers.

She penned: “My neighbour (with a newborn) did call, to be told you were trying to find an engineer and not to check out of her hotel. After five days if no power – for us, no water either. I’ve got three wee ones and it’s absolutely freezing. @ssencommunity @SSE.”

She directed the message to Scottish and Southern Electricity Networks (SSEN) who provide energy for homes in Scotland and southern England.

The company addressed Martel’s complaint and assured the mum-of-three they are working on finding a solution.

They replied: “Hi, I’m very sorry for the continued power loss in your area and for how long it’s taken us to get back to you. Due to Storm Arwen, there has been extensive damage to our overhead network, some of the worst seen in a decade. Please call 105 to receive an update on your fault!”

In an earlier post, Martel contacted the energy company for help as she joked her husband was turning into Jack Nicholson from film The Shining.

She wrote: “Dear @ssencommunity @sse please help – we’re on our third day of no power and my husband is slowly turning into Jack Nicholson from The Shining…

The BBC presenter had detailed the issues she has experienced since Storm Arwen began.

Sharing a picture of flooding, a stranded car and a fallen tree, the small-screen star said her thoughts were with those vulnerable people who are home alone with no support.

She tweeted: “I will never take flushing a toilet (living with 4 boys) for granted again. Power off from 6pm last night. Thinking of vulnerable people living alone.

The TV regular explained her electricity went down while they were celebrating her middle child’s birthday last week.

Energy provider SSEN said the storm had caused “catastrophic damage”, three times greater than that caused by the Beast from the East in 2018.