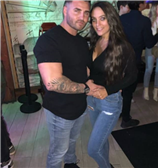 Sammi Giancola may not have any interest in joining her ex-castmates on their lucrative “family vacations,” but she still likes to keep fans up to speed on the latest developments in her world.

And while Giancola might be keeping a much lower profile than her fist-pumping former co-stars, there’s still a lot going on in the life of Sammi Sweetheart.

Earlier this year, for example, Sammi broke off her engagement to Christian Biscardi.

And while the separation was certainly sad, it could have been much, much worse.

After all, Sammi and Christian were supposed to get married in 2020, but they postponed the wedding because of the pandemic.

Breakups are always unpleasant, but at least these two weren’t forced to hire and lawyers and split up their property when they went their separate ways!

Sam didn’t say much about the breakup, but she didn’t deny reports that it was a very painful chapter in her life.

But hey, this is a woman who survived a relationship with Ronnie Magro, one of the most toxic boyfriends in the history of reality television.

So she’s not about to let a little run-of-the-mill breakup prevent her from living her best life for very long.

In fact, as she revealed on Instagram this week, Sammi has not only re-entered the dating scene, she’s embarked on an official relationship with a man named Justin May.

Sammi and Justin both posted the photo above on Thursday.

The pics only appeared in their Instagram Stories, and there were no accompanying captions, but this seems like a situation in which an image is worth a thousand words.

Giancola and May both posted the same pic on Thanksgiving with no explanation?

We think it’s pretty obvious that these two proceeded to enjoy an intimate dinner of lasagna and manicotti, just like the pilgrims of yore.

On the Jersey Shore-obsessed corners of Reddit, fans have been offering their most enthusiastic congratulations to Sammi and Justin.

Yes, quite a few have pointed out that the new guy doesn’t have an Italian last name, but hey — guido is a state of mind, right?

As for Christian … well, we have no way of knowing how he feels about Sam moving on so quickly, but insiders say there’s never been any bad blood between the exes.

“Sammi and Christian split amicably…There was no drama,” a source close to the situation told Us Weekly after the breakup became public knowledge in August.

“They planned on getting married in 2020 but then Covid hit and they had to reschedule their wedding date. Eventually they just called it off completely.”

So it sounds like these two dodged a bullet — and along with companies who manufacture face masks, they’re on the short list of people who actually benefitted from the pandemic.

The source says that Sammi is “doing well and is in a great place,” adding:

“She surrounds herself with friends who support her and her family.

“She’s happy and not letting a bump in the road get in the way of her goals.”

As for the rumors that Sammi might one day return to Jersey Shore, well … don’t go holding your breath.

When it looked as though Ronnie had been fired from the show, there might have been a chance, but we doubt that Sammi will be putting herself in close proximity to her toxic ex anytime soon.