For years, Angela Vitek wanted to stop dyeing her hair. She had been covering up the pronounced white streak in the middle of her hair, which she hated – “It’s exactly like Cruella [de Vil]” – since she was 18, and by her early 40s she had become resentful of all those hours spent in the hairdresser’s chair every month. “I really wanted to find the courage [to stop dyeing it], but knew I wasn’t going to, really.”

Those around her were clear how they felt about her struggle, too. 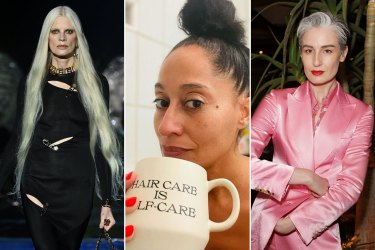 Showing off some of the 50 shades of grey that have been dubbed a look “to aspire to”, from left: Kristen McMenamy, Tracee Ellis Ross, and Erin O’Connor.Credit:Getty Images and Instagram

“She said she’d sack me if I went grey,” Vitek, a Sydney corporate worker, says of her hairdresser, with whom she raised the idea seven years ago. “She’s very glamorous and I don’t think she’d attach her name to it.”

Friends were against the idea, too. “One of my girlfriends said to me ‘You can’t stop dyeing it until your youngest reaches double digits, otherwise it’s [going to look like you’re his] grandma picking him up at daycare’,” says Vitek, a mother of three sons aged 12, 11 and eight.” And I kind of said ‘That’s right, that’s it. It’s unfair to him.’”

But then COVID-19 hit and Vitek’s hairdresser closed down.

“I announced my coming out on Facebook,” says Vitek of her decision to stop dyeing her hair seven months ago. The realisation that she’d have to dye her own hair, she says, prompted “a bit of an existential crisis” in which she questioned who she was and what her hair meant to her. She decided she was “bolshie”, wanted to model for her sons the value of substance over style and being comfortable with who you are from within. She was done with the dye.

Her friend might have to get used to it. Because across Australia, there’s a growing army of women who have decided to embrace their natural grey hair during the pandemic – or if they’re not grey, to dye it that colour.

Once a sign that a woman had “let herself go” or was one step away from drinking gin out of a cat dish, grey hair has recently been dubbed everything from a “look to aspire to”, to “a badge of honour” and “the colour mood of the moment”. British Vogue put out “the ultimate grey hair guide” earlier this year. It featured photographs of the unofficial spokeswomen for what’s been called the new GAP – grey and proud – movement: models Kristen McMenamy, 56, and Erin O’Connor, 43, and British Vogue executive editor Sarah Harris, in her early 40s, whose long mane went white at 16.

Sydney hairstylist Jason Gardner isn’t surprised, saying that “fashion grey” first became a popular hair colour when Kelly Osborne dyed hers in 2012, and that the pandemic has inspired people to take the plunge.

“People are making brave changes because they’re just kind of going, ‘You know, I played it safe my whole life, and it’s just not the same world anymore, so let’s have some fun’,” says Gardner, owner of Sydney’s Suite hair salon, noting that many clients have dyed their hair different colours since lockdown lifted this year, many of them opting for a “smoky grey”.

As for his clients who went naturally grey before the pandemic? They’re getting more praise than ever. “Every time I see them for a haircut or a blow dry, they tell me, again and again, how many compliments they get, and they get asked who is their colourist. Because they [other people] think it’s fake … Grey is not shameful anymore.”

This is borne out by the number of celebrities – Salma Hayek, Tracee Ellis Ross and Andie MacDowell – who have shown off their silver and white strands during the pandemic. (“My kids think it looks badass,” said Maid star MacDowell, who sported nearly an entire head of grey cascading curls on the cover of Greek Vogue earlier this year.)

It also accounts for why Victorian model Lou Kenny, 62 – whose collarbone-length hair is a beautiful mix of black and white sections – is just as busy modelling now as she was in her heyday in her 20s and 30s.

“I’m surprised,” says Kenny, a yoga teacher whose recent modelling clients include fashion designer Toni Maticevski, fashion brand Trenery, Volkswagen and Mecca Cosmetica. She thinks it’s part of a wider culture of embracing diversity. Grey hair was unheard of in modelling, she says, when she got her start in the 1970s.

“Grey is actually the most flattering [hair colour] for anybody’s skin,” says Gardner. “It’s neutral, but it’s on the cooler side so it doesn’t bring out pinks and stuff in your skin. When you’ve got a warm [hair] colour on, all around your nostrils appears even more red. Any kind of uneven pinky blotchiness on your face will just ramp up. Cold-coloured hair makes the skin more olive.”

But for many of the women who’ve made the transition to grey in recent months, the joy that has arisen from the growing-out process has led to rich and complicated identity shifts.

“I’ve gone from being the girl with the dark hair who’s mostly homogenous to someone that’s become a little bit memorable,” says Melbourne restaurateur Jackie Middleton, who decided to stop dyeing her hair. Middleton, 45, had childhood memories of dyeing her mother’s hair and vowed she would never be “that person”. “[But] my vanity took too much,” she says, and by last year Middleton was sick of going to the hairdressers every three weeks to keep her white hair at bay. The closure of hairdressers prompted her to quit dyeing altogether.

“I’m trying not to allow my brain to think ‘grey hair is someone who’s old’,” says Middleton, owner of the popular cafe chain Earl Canteen, who will be opening a new cafe, Dame, in the new year. “Probably the breakthrough in the mindset for me was that a barista in a cool cafe said, ‘Who dyes your platinum streak?’ I was like, ‘Oh, you’ve either been really well trained, I love you, or it might [actually] be a cool thing.’”

For Claire Brandenburger, finally ditching the dye two years ago has meant liberation.

“I felt it was very empowering to say [with my grey hair], ‘This is me, and I’m not hiding it,’” says Brandenburger, 45, a biologist at Sydney’s Royal Botanic Garden. Deciding to stop hiding her white hair after decades of dyeing was also, she says, an emotional strike against a culture that has long forced her to hide parts of herself deemed unacceptable.

“Like waxing our legs and wearing make-up,” she says, adding that seeing other women go grey during the pandemic made it easier for her.

This isn’t to say it’s been an easy transition for many women.

“I was taking my kids” – aged nine and five – “out for ice cream early in my grey transition and some old Grandpa said to the kid that he was with [of me], ‘Oh leave the lady and her grandkids alone’,” says Middleton. “I was kind of like [thinking], ‘Oh my god f— you buddy’.”

It was just one of many moments that prompted her to cry to her husband about how “disgusting” her hair looked while the grey grew in, and she later weathered a short pixie cut in order to remove most of the dye. “I felt like I had my nanna’s hairdo,” says Middleton, whose hair is now a bob, which she likes. “I accidentally tortured myself.”

Lauren Metz, a Sydney health care provider, was insulted by patients at work.

“My most opinionated patient, he gave me this skewed look and then followed me into the room and shook his head and said, ‘Why have you done that to yourself?’” says Metz, 45, who stopped dying her blonde hair a year ago and is now almost completely silver. “[He said] ‘Your hair, you need to dye it back’.”

Metz, who was inspired by multiple popular grey-positive Instagram accounts – like @thesilverlining_1970, @Grombre and @Silver.isthenew.black – devised a go-to comment for nay-sayers: “Well, I’ve thought about this for a long time, and I’m actually really happy with the decision.”

For the number of times she’s been attacked for her choice, though, it’s been more than worth it.

“I’m much more confident,” says Metz, who had wanted to stop dyeing her hair years ago but was “scared” to find out what her natural colour was. (Having grown inches of white roots during lockdown, she says, gave her the motivation to go through with growing the rest out.)

“Did my increase in confidence allow me to do it, or did doing it increase my confidence? I think it’s a bit of both. You know, I used to always care about what everyone thought. Now I care more what I think. Before, it was always, ‘What would someone else think of me? Am I beautiful enough for them?’ … [Now I’m more] accepting of what I’m given, whether it’s my thighs or my bum or my hair. People would say, ‘Oh, how do you know it’s [grey hair] going to go with your face?’ And I’m like, ‘Well why wouldn’t it go with my complexion? Like how does it go or not go?’ It’s what I’m naturally meant to have.”

For Vitek, going grey has changed her view not just of herself but of the wider culture.

“My world view is really warped right now because I think that everyone’s doing it [going grey] and everyone thinks it’s glamorous,” she says, noting a recent visit to a Sydney shopping centre revealed numerous women in their 40s with inches of grey hair growing in. “I was with my son [saying] ‘Look, look at her!’ He was like, ‘Calm down, it’s just hair’.”