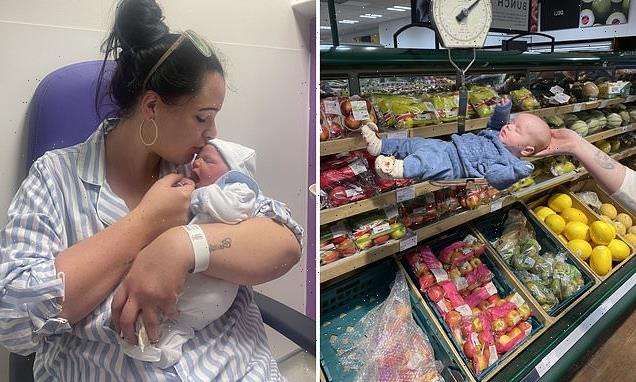 A pound of pears and a baby boy, please! Mother, 31, uses M&S scales to weigh her son… because drop-in clinics are shut due to Covid

With drop-in baby clinics still shut due to Covid, new mother Tasha Moss came up with an ingenious trick to find out how much her ten-week-old son weighed.

Spotting old-fashioned fruit and veg scales at her local Marks & Spencer, the 31-year-old couldn’t resist putting little Freddie-Jay in the dish meant for apples and carrots.

The cheeky check-up showed he was growing well – and a photo of the scene, including an M&S sign saying ‘Pick of the bunch’, quickly proved a hit on social media.

Of course, the post – captioned ‘Good old M&S with old school scales’ – attracted the inevitable comment, as a play on a famous Marks & Spencer advert: ‘He’s not just any baby, he’s an M&S baby.’

The Facebook photograph racked up more than 2,500 likes, shares and comments.

Inspiration for the impromptu weigh-in struck when Miss Moss and a friend were shopping for cakes at the Reading store. 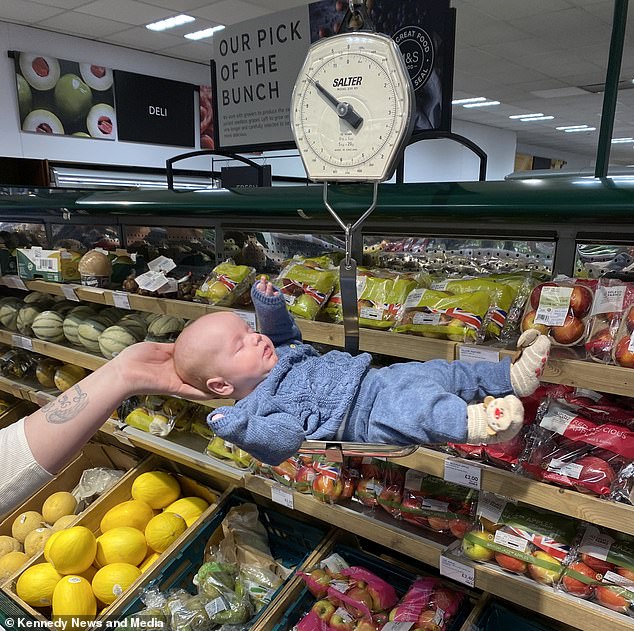 ‘We were walking past the fruit and veg aisle,’ she said.

‘I had Freddie in my arms, I had just finished feeding him, and I saw the scales. I said “Shall we weigh him?”.’

The mother-of-three, from Finchampstead in Berkshire, who cleaned the tray before and afterwards with anti-bacterial wipes, was thrilled to see that Freddie-Jay, who was born at 6lb 5.5oz, tipped the scales at 10lb 4oz.

To her relief, the somewhat inexact check-up confirmed he was growing well.

Miss Moss said: ‘It’s obviously not as accurate as digital ones but it’s given me a slight idea of what he weighs now.

‘I haven’t had him weighed for so long. It was reassuring to know I’m doing something right.’