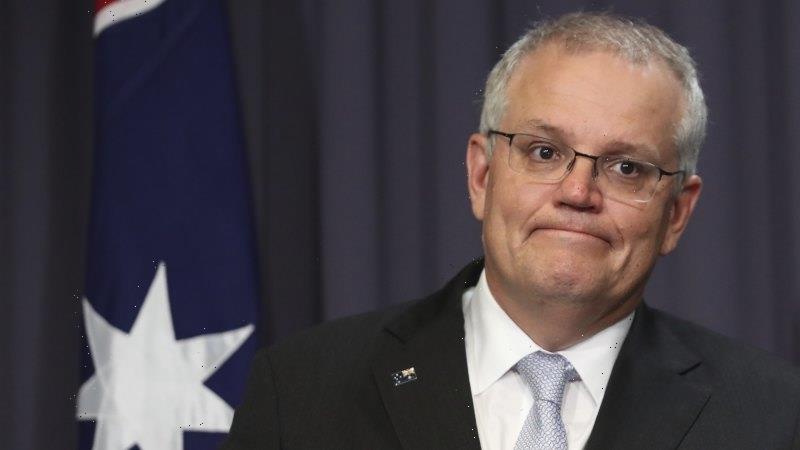 The overwhelming impression the Morrison government has projected this week has been one of chaos, with revolts coming from the right and the left.

And that’s accurate. But, within the shambles, there has actually been one encouraging sign. We’re seeing a new generation of Liberal moderates belatedly raise their voices. 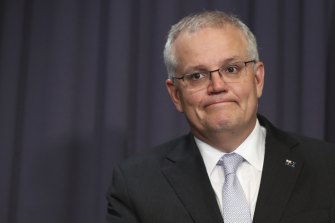 Looking towards 2022 and the election, Morrison could hardly be facing a more uncertain environment.Credit:Alex Ellinghausen

When several moderates spoke out in the Coalition party room, airing their reservations about the Religious Discrimination Bill, or aspects of it, it was the most significant indication so far they aren’t willing to be quiescent any longer.

They may be partly driven by the looming election, but whatever the motive, it was an important moment.

It’s true the moderates had played a part in the government’s embrace of the net-zero by 2050 target, including putting their views in a meeting with Scott Morrison. Further back, under the Turnbull government, some had been drivers for same-sex marriage.

In the party room this year Warren Entsch, member for the north Queensland seat of Leichhardt, adopted the tactic of deliberately getting up to counter contributions from right-wingers such as fellow Queenslanders Gerard Rennick and the Nationals’ Matt Canavan, so that the official briefing for journalists after the meeting didn’t just include one side of an argument. 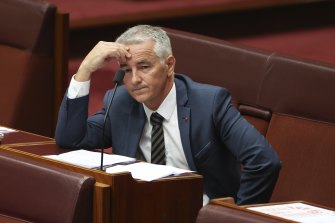 Senator Gerard Rennick during debate in the Senate this week.Credit:Alex Ellinghausen

But this week the presence of the moderates, a number of whom arrived in the class of 2019, was suddenly more obvious.

While it’s one thing to get up on your hind legs in the party room, or even to make public statements, it is a big step to call out your government in parliament.

It would have taken a lot for Bridget Archer, a moderate who holds the highly marginal Tasmanian seat of Bass, to make herself the story.

Archer said outright what a number of her moderate colleagues were thinking when she criticised the government for not bringing forward its legislation for an integrity commission. 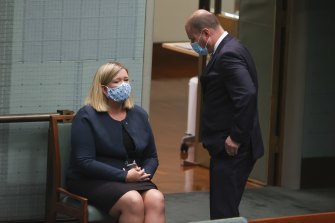 Liberal MP Bridget Archer in discussion with Treasurer Josh Frydenberg after she crossed the floor during a division to suspend standing orders to allow debate on an integrity commission bill.Credit:Alex Ellinghausen

“I am a bit offended, in a way, that we are prioritising – in a rush, I might add – the Religious Discrimination Bill over an integrity commission,” she said, in very frank remarks to The Guardian on Wednesday.

Then on Thursday, she seconded a move in the House of Representatives by crossbencher Helen Haines to try to bring on for debate Haines’s private member’s bill for an integrity commission. Archer wasn’t arguing that bill was perfect but declared the issue needed to be talked about.

All crossbenchers and Archer voted in favour, and had the numbers. But the move failed because it did not have an absolute majority.

Archer was later ushered into a meeting with the PM, Josh Frydenberg and Marise Payne. She was offered a “pair” for next week, but declined it.

A fellow moderate said of Archer’s action: “It’s been asymmetrical warfare for too long” – people on the right of the Coalition having had licence to speak out on their issues.

Ironically, it was a moderate, Communications Minister Paul Fletcher, who’d had the task of slapping down the Haines-Archer move. Fletcher told parliament the government stood ready to introduce legislation, which begged the question of why it hadn’t done so.

The government’s suppression of the integrity debate (which it also did earlier this week in the Senate) was a pyrrhic victory.

It was a bad look: not only hadn’t it brought in promised legislation, but it had also refused to allow a debate on an issue very many Australians rate highly.

Forced onto the back foot over the matter, Morrison later took the unexpected tack of declaring the legislation was actually out there.

He was referring to the original model the then attorney-general, Christian Porter, released a year ago. That draft, widely criticised, has been the subject of consultations, with the aim of producing a revised bill.

But whether the bill will be reworked is now in doubt. Morrison’s spokesman said there was “no final decision” about making any revisions. Government sources said it was looking “increasingly likely” the legislation released last year would be that presented to parliament. This would make a nonsense of the consultations.

Morrison also launched a fresh sweeping attack on the NSW ICAC, saying, “what was done to Gladys Berejiklian, the people of NSW know, was an absolute disgrace”. Given the evidence against Berejiklian, and regardless of her continued popularity, reflected in new polling, this was a very dubious path to go down.

Earlier this week, Morrison lectured the Coalition party room on the danger of division. His exhortation had little effect. Apart from the Archer revolt, negotiations by Morrison and Frydenberg with senators Rennick and Alex Antic – who were withholding their votes because they are agitated over state vaccine mandates – had only limited success. And there were other breakouts.

Once, the political wisdom might have been that if Morrison were returned for another term he’d be rewarded with unbridled authority – having achieved a second “miracle”. Equally or more likely, however, if his margin were again razor thin, he could be more constrained by a backbench starting to look at leadership succession, in the realisation the Coalition’s good run couldn’t last forever.

If he found himself in minority government, his arm would be twisted on issues (such as an integrity commission) where his negotiating position would be weak.

Morrison has only another week this year to endure his disorderly party room, but the issues backbenchers are concerned about will hang around.

The Religious Discrimination Bill will be a source of contention over the summer. On the integrity commission, the government is in a no-win position. If it doesn’t introduce legislation, it will come under sustained criticism. If it does, the model will be an orphan.

Meanwhile, the agitators on the right will continue their rage over state vaccine mandates, a big issue with the base in Queensland.

Looking towards 2022 and the election, Morrison could hardly be facing a more uncertain environment.

He is seeking to surf on Australians’ post-lockdown new freedoms. But given what’s happening in Europe, there is no guarantee Australia, especially as the international borders open, might not face a fourth wave of COVID-19 next year, despite very high vaccination levels. If that happened, some restrictions could be reimposed, which would undermine the freedom pitch.

While the election time isn’t locked in, Morrison’s plan, it seems, is for parliament to return in February, including to try to bed down the religious discrimination legislation. Before a May election there would be a budget, to focus attention on the economy, the government’s strongest ground.

That strategy has a lot of logic. But such uncertain times mean it is also dangerous to delay, which will be the argument of those who would advocate having the poll in March.

Michelle Grattan is professorial fellow at the University of Canberra. This article was first published on The Conversation.