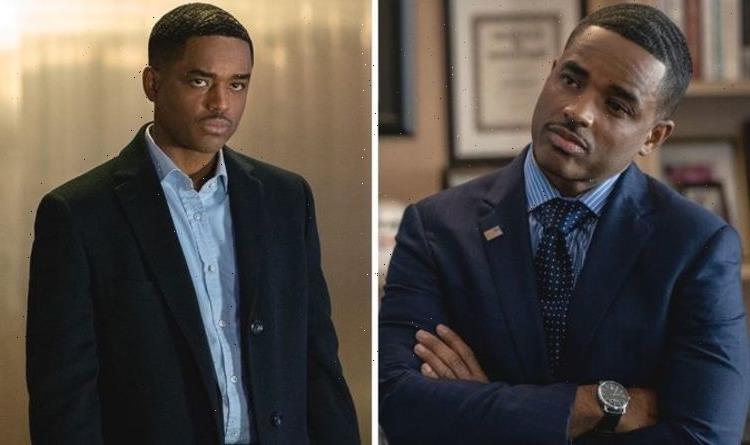 Power Book II: Ghost finally premiered its highly-anticipated second season on Starz, with an action-packed episode. Making his comeback on the show, Rashad Tate (played by Larenz Tate), spoke to express.co.uk about his controversial character and revealed who he was originally cast to play.

Rashad was first introduced to fans in season four of the original series of Power as a local politician.

The last time fans saw him, he had failed to gain a seat for the Governor’s office in hopes of gaining more political power in New York.

After the loss, Rashad resorted to drinking away his woes while living on his brother’s Kamaal Tate’s (Lahmard J. Tate) sofa.

However, despite the very convincing portrayal it turned out, the actor was originally cast to play another controversial character.

“Let me tell you a story,” Larez begins.

“I’m really good friends with Omari Hardwick who plays Ghost from the original Power, 50 Cent and I’ve been trying to find a way to work together.”

Larenz continued: “I got a chance to meet Courtney Kemp, I was a big fan of the show, and I was cast to play a different role in the original series.”

He revealed: “I was supposed to play the character, Terry Silver, who was the lawyer of Ghost, who falls in love with Tasha.”

Terry Silver (Brandon Victor Dixon) also made his first appearance on Power in season four as James ‘Ghost’ St Patrick’s lawyer but ended up causing more problems for the kingpin.

Terry ended up having a fiery fling with James’ wife Tasha St Patrick (Naturi Naughton) which began while James was behind bars.

However, after he succeeded in getting him out of prison, he met his unexpected demise at the hands of James.

After he caught the two sharing a kiss in the car park, James snuck up from behind and brutally murdered him, before leaving him to rot in the boot of his own car.

Larenz disclosed scheduling conflicts stopped him from accepting the role: “I was away working, I couldn’t do it, it didn’t happen.

He stated: “I felt bad that it didn’t work itself out and I wanted to be on that show so I called up the creator of the show, Courtney Kemp, and I said, ‘Whatever you need I’m down’.

“Don’t worry about agents and managers. I’m calling you, I’ll do the show, just one episode and she says ‘I appreciate that.’”

Thankfully, Courtney had a role in mind for Larenz and told him: “‘It’s interesting that you called because I got more than one episode’.”

Speaking on what to become his next major role she explained: “‘I have four episodes in season four are you available, it’s going to be a politician’.

“‘His name is Rashad, his last name is going to be Tate’ and I said ‘well sign me up because I already got the last name Tate that works, and I want to be on the show,’” the actor laughed.

Larenz explained: “The fact that I was able to get in and work with them, I didn’t know what to expect but they gave me a safe space to kind of create.”

Lifting the lid on the process he shared: “Once they saw my interpretation of who this Councilman was, I just going with the flow of it all and they began to write to that.

“They invited me back for season five and that’s pretty much how it came to be and it attracted me to play someone that is dealing with duality.”

Thankfully, viewers can expect to see more of Rashad in season two and find out if he will be able to bounce back from his political failure.