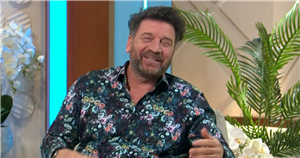 I'm A Celeb star Nick Knowles famously takes part in DIY projects including his show DIY SOS and Big House Clearout, with both jobs meaning the star has to be hard at work.

The TV star told Lorraine Kelly on her self-titled show that he had previously caught Covid-19, but he kept the realities of it to himself.

Nick said: "Right at the start of lockdown I got Covid-19 pretty bad and I tried to get back into exercise straight after. There seems to be a suggestion now that going back too soon can cause you problems.

"I had long Covid for around 10 months."

As he confessed he had no energy, he said: "I didn't want to tell anybody because I was worried I wouldn't get a booking for work. So I kept it to myself.

"I'm climbing up huge buildings, seven storey buildings and having to stop every two ladders."

Nick explained that, while his role is usually quite active, he would walk up a few steps in a house before taking a moment to himself, telling his crew that he was "taking in the view".

He added that he was "exhausted" while filming as he remained busy at work.

Nick's main cause of concern was if it was clear that he was getting out of breath while doing his daily tasks he wouldn't be able to continue working.

He did confirm that he started to feel better around eight months ago and has kickstarted his fitness once again.

Nick, who was previously rumoured to be stepping down from DIY SOS, will be returning to the show in 2022 after a BBC Statement said: "We will resume filming DIY SOS as soon as it's safe to do so and Nick will be back on our screens in 2022."

With filming for DIY SOS back, and Nick Knowles appearing on the Channel 5 show of Big House Clearout, he still remained incredibly busy over the year – something he wanted to do post lockdown.

Nick, who struggled to get back into his fitness immediately after contracting Covid-19, admitted that his weight crept up during lockdown after he was forced to put it on hold.

He told The Mirror: "I've made a living by looking like a bag of spanners on TV. I'm 18 stone, I'm massive.