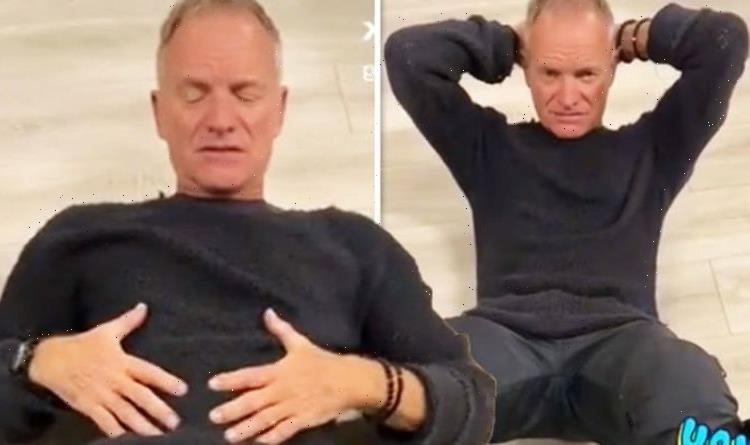 Sting says he is ‘working class’ on The One Show

Sting turned 70 in October but the singer doesn’t look a day older from when he burst onto the music scene over 50 years ago. He does, however, have a secret for his good health and ageless appearance as the legendary crooner shared a candid video on Tiktok today.

The Message In a Bottle hitmaker urged his fans to get involved as he showcased his washboard abs.

The former Police bandmate encouraged fans to take up the Sting perpetual crunch.

In view of his 113,000 followers, the singer could be seen lying flat on his back while pressing his rockhard abs.

The musician flaunted his flat stomach as he showed off his incredible fitness skills.

Dressed in a black t-shirt and jeans, Sting began to tense the muscles in his taut stomach.

He commented: “Getting my tummy nice and hard.”

The performer urged his fans to get involved in the perpetual crunch challenge, as he captioned the post: “You can do it.”

The star couldn’t resist asking fans: “Do you like my boots?” as he performed what some suggested was a “tantric” routine.

One fan joked: “Don’t crunch so close to me.”

Another remarked: “Sting letting us see him exercise with every breath he takes.”

While a third gushed: “He has aged really well.”

The seasoned rocker previously claimed yoga and vanity were key to his youthful appearance.

The musician – whose real name is Gordon Sumner – has enjoyed an illustrious career spanning 50 years and boasts an impressive catalogue with hits including Roxanne, Every Breath You Take and Shape Of My Heart.

Sting is one of the most successful artists in the world, with over 100 million albums sold worldwide, while he’s scooped 17 Grammy Awards as well as an Ivor Novello award.

In 2003, he was inducted into the Rock and Roll Hall of Fame.

Last month, the legendary musician appeared on BBC’s The One Show where he made a candid admission.

The songwriter was quizzed about his longevity within the music industry by presenter Ronan Keating.

The Every Breathe You Take crooner explained that being a musician is his “medium” as he admitted he has no plans to slow down.

Ronan questioned: “You never stop working. Constantly. Where does that work ethic come from?”

The Boyzone bandmate probed the Police star further as he questioned the musician on his work ethic for a second time.

He remarked: “You just love it. Your work ethic, it’s just constant. You never stop.”