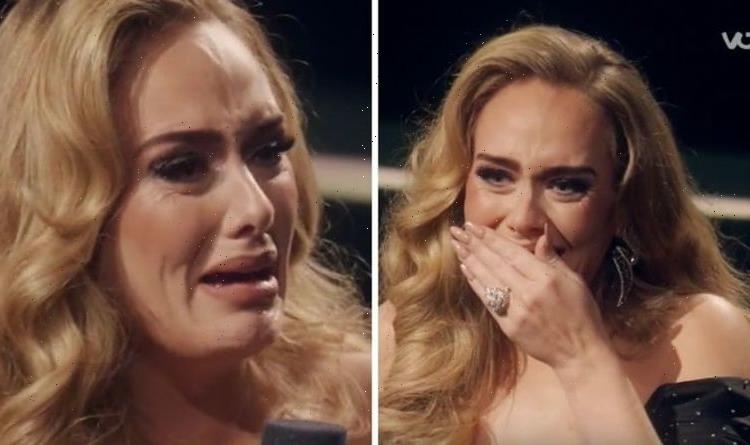 An Audience With: Adele surprised by former teacher in audience

Adele gifted ITV viewers with a special homecoming performance on An Audience With on Sunday night. During the concert, the songstress was asked questions by her star-studded audience. However, when Emma Thompson announced Adele’s inspirational school teacher was in the audience, she burst into tears.

During the performance, actress Emma asked Adele if there was anyone she used to look up to, who kept her going through difficult times.

She started to recall a story about one of her old teachers called Miss McDonald, referring to her as “cool” and inspirational.

Adele said: “She used to have all these gold bracelets on and gold, like, sequins.

“[She was] so relatable and likeable that I really looked forward to my English lessons.”

Adele then looked stunned as Emma announced Miss McDonald was there in the audience.

The pop sensation could not control her tears as her teacher walked out on stage with her children.

Miss McDonald said: “You’re amazing darling, I am so proud of you.”

Adele, who continued to blub, said: “Oh you look exactly the same.”

They shared an embrace and had a quick catch up before Adele decided to leave her performance for a few minutes.

She asked comedian, and close friend, Alan Carr to take over and sing her popular track Make You Feel My Love whilst she fixed her makeup.

One said: “Omg @Adele‘s teacher #MissMcdonald coming out during #AnAudienceWithAdele was such a beautiful moment – it’s amazing how much power teachers have to shape and inspire our lives. Moved to tears.

“Thanks @chattyman for having us in stitches the next second!”

Rach Leary said: “I would have given anything to have been at an audience with Adele, I can literally feel the energy, it feels magical #AnAudienceWithAdele.” [Sic]

Suzyallthatglitters said: “Adele is so talented and down to earth. She has never forgotten her roots and where she came from.

“Some of these celebrities today who think there something could learn a lot from her.”

In between performing ballads from her new album as well as some much-loved hits, she took questions from the crowd.

She took a question from actor Idris Elba and revealed when she had felt most excited or scared about an event.

She admitted she almost didn’t turn up to headline Glastonbury Festival as she suffered from “impostor syndrome”.

Adele’s An Audience With… can be watched on ITVHub.