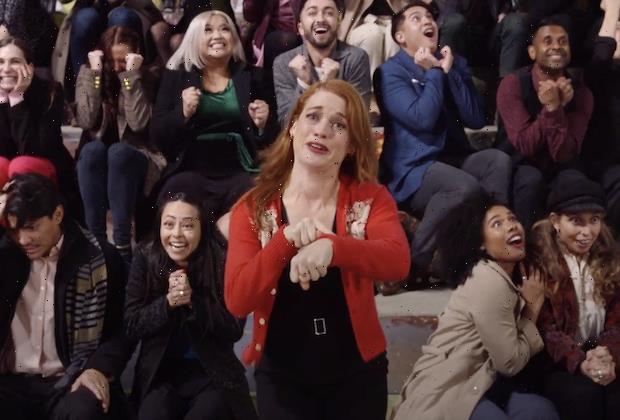 
Picking up after the events of the Season 2 finale cliffhanger, the feature-length continuation follows Zoey on her first holiday without her beloved father as she attempts to create a magical Christmas for her family just like the ones Mitch used to do. (If you need a refresher on how Season 2 wrapped up, check out our finale post mortem Q&A with series creator Austin Winsberg.) Jane Levy (Zoey), Mary Steenburgen (Maggie), Skylar Astin (Max), John Clarence Stewart (Simon), Alex Newell (Mo), Andrew Leeds (David), Alice Lee (Emily), Michael Thomas Grant (Leif), Kapil Talwalkar (Tobin), David St. Louis (Perry), Peter Gallagher (Mitch) and Bernadette Peters (Deb) are all set to reprise their roles.

The film will debut for free on Wednesday, Dec. 1, exclusively on The Roku Channel — which does not require a Roku device — in the U.S., Canada and the UK. All 25 episodes of the series are currently available to stream on the service.

On June 9, NBC pulled the plug on Zoey’s after two seasons. Negotiations with the network’s sibling streamer, Peacock, for an eight-episode final season also fell apart. In the wake of the cancellation, Lionsgate, the studio behind Zoey’s, shopped the series to other streaming outlets before landing a movie deal at Roku. Should the film perform well, we hear Roku could potentially order additional episodes.

Press PLAY on the video above, then hit the comments with your wish list for Zoey’s Extraordinary Christmas.