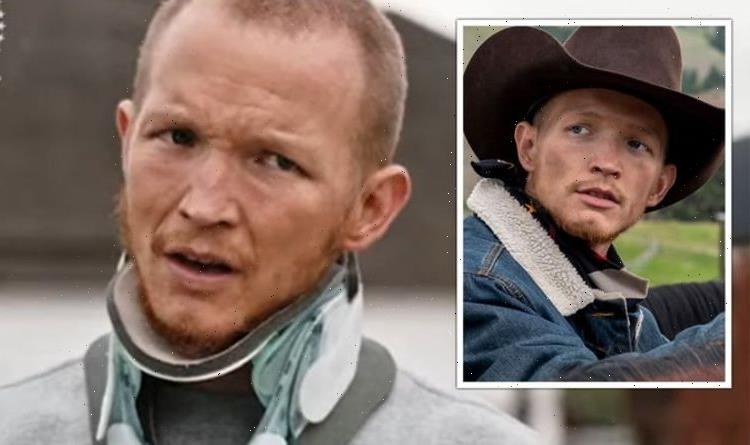 Yellowstone season four has been airing on The Paramount Network and the next episode is titled Winning or Learning. In the third episode, fans saw Jimmy Hurdstrom (played by Jefferson White) take on a new job at the Four Sixes. Fans have been wondering whether he has left his duties at the Dutton ranch for good.

Fans were pleased to learn Jimmy survived the fall from a horse, which occurred in the season three finale.

However, he was left badly injured and the accident made him question his life choices.

In the third episode, he took on a new job at the Four Sixes, representing the Yellowstone brand.

John Dutton (Kevin Costner) had said: “This isn’t a punishment Jimmy, it’s an opportunity if you let it be.”

Before he left for the new ranch, he broke up with girlfriend Mia (Eden Brolin), adding to the pain.

However, in his eyes it should be for the greater good as he will learn to become a better cowboy.

Once he has the skills he needs, he will hopefully return to the Dutton ranch and Mia will give him another chance.

But it will not be an easy ride for Jimmy, as he will have to prove himself to a lot of people.

As for whether he has left the Dutton ranch for good, this is yet to be seen.

However, he was spotted briefly in the promo video for episode four, suggesting he will remain part of the series.

Although there is a chance this brief moment could have been a flashback from the previous episode.

Jimmy was wearing the same outfit he had on when he left the Dutton ranch, so the clip could simply be revisiting the past.

Fans of the series will be pleased to hear he will return for the upcoming Yellowstone spin-off, titled 6666.

The series will air on Paramount Plus and will be set on the ranch Jimmy has now moved to.

Actor White is on Instagram but he is yet to post anything about his character’s exit from the series.

This may be because he will be making a comeback further down the line, in a future episode.

Fans have taken to Reddit to discuss Jimmy’s exit, with raccoonbandit13 saying: “They might be using Jimmy as a reason to have scenes at 6666 this season as a sort of backdoor pilot to get people interested in the new show.

“He’ll probably leave Texas to return to the Yellowstone in the season finale.”

KumquatConnoisseur added: “I really hope Jimmy comes into his own. The whole buffoon shtick will get old sooner rather than later.”

JustSumFugginGuy said: “It was happening toward through season 3. Really enjoyed his character development.

“He had to let that trash barrel racer make him choose and now she’s making it sound like it’s his fault.

“Would’ve been better had he chose the Yellowstone over her and kept his word to John.”

BadCowboysFan concluded: “John’s speech was powerful — about him representing all of them.

“I think Jimmy will be a changed man (in a positive way) when/if he returns to Montana.

“John gave him advice like a father would, about his predicament and lady troubles. Good stuff.

“I also liked that Lloyd was sad to see him go.”

Yellowstone airs on Sundays on The Paramount Network