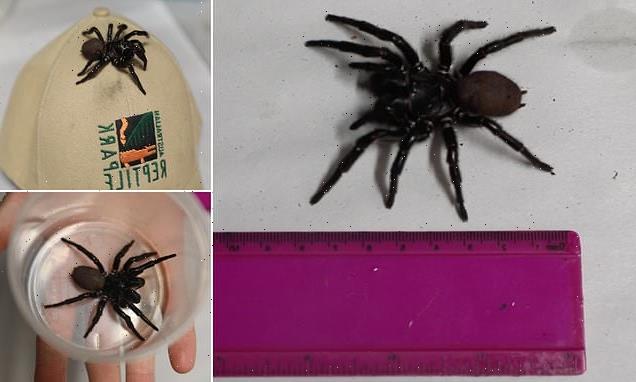 ‘The biggest of its kind we’ve ever seen’: Meet Megaspider the three-inch funnel-web that can pierce fingernails with its fangs handed in to an Australian reptile park

A ‘massive’ three-inch funnel-web spider capable of biting through a human fingernail has left handlers at an Australian reptile park stunned.

The eight-legged beast, dubbed the ‘Megaspider’, was handed in to the Australian Reptile Park (ARP) in New South Wales this week.

The animal, which usually measures just one to five centimetres (0.3 to 1.9 inches), was found in a Tupperware box at one of the park’s drop-off points dotted around Sydney, the Central Coast and Newcastle – sparking a hunt to find the person who handed it in. 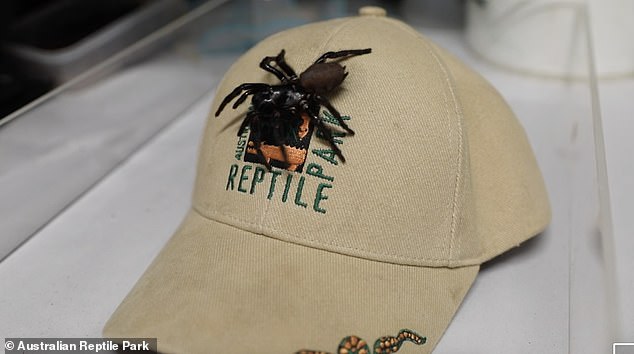 An eight-centimetre funnel-web spider, dubbed the ‘Megaspider’, was handed into the Australian Reptile Park in New South Wales this week (pictured on a cap from the park) 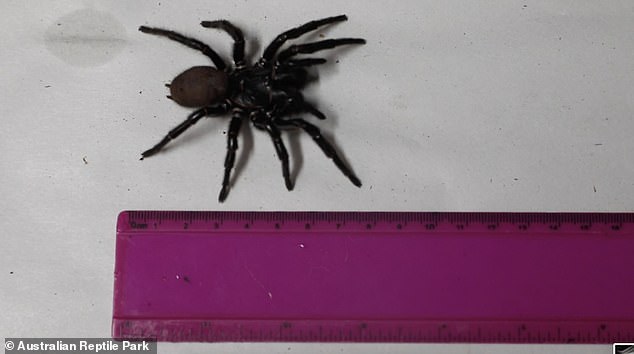 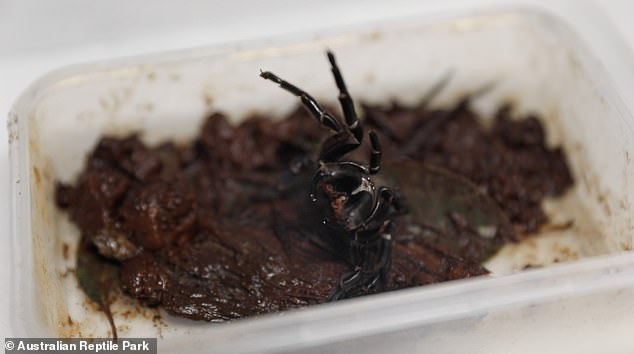 The park regularly encourages members of the public to safely catch funnel-web spiders for its anti-venom programme, and says the Megaspider is the biggest they have ever seen.

Michael Tate, Education Officer of the Australian Reptile Park, said: ‘Having Megaspider handed into the venom program is so amazing, in my 30-plus years at the park, I have never seen a funnel-web spider this big!

‘She is unusually large and if we can get the public to hand in more spiders like her, it will only result in more lives being saved due to the huge amount of venom they can produce.

‘We are really keen to find out where she came from in hopes to find more massive spiders like her.’

Australia’s largest spider species is the so-called whistling spider, which belongs to the tarantula family and gets its name from the noise it makes when provoked.

The body of a whistling spider – or Selenocosmia crassipes – can measure up to six centimetres (2.4 inches) long, while its leg span can reach 16 centimetres (6.3 inches), according to the Australian Museum.

Funnel-webs tend to be much smaller, but are still notorious due to many of the 40 or so varieties boasting ‘highly toxic and fast acting venom’, the museum adds.

They have been linked to 13 deaths in Australia, all from males of the Sydney Funnel-Webs variety.

‘This remarkable spider has become a part of Sydney’s folklore and, although no deaths have been recorded since the introduction of an antivenom in 1981, it remains an icon of fear and fascination for Sydneysiders,’ the museum’s website reads.

The Australian Reptile Park said rainy and humid weather has provided the perfect conditions for funnel-web spiders to thrive.

The park is the only facility in the country which milks funnel-web spiders for their raw venom, which is used to create an anti-venom, saving up to 300 lives per year.

The park says funnel-web spiders are milked weekly for their raw venom that is sent off to Seqirus in Melbourne to be made into lifesaving antivenom. 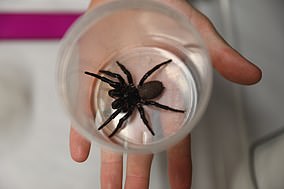 1. Funnel web spiders are widely regarded as one of the most deadly spiders in the world due to their strong venom. Symptoms from their venom include difficulty breathing, heart collapse, and disruptions to the nervous system.

3. When threatened they show aggressive behaviour. They reach up on their back legs and show off their large fangs.

4. There are more than 40 types of funnel web spiders. All of them are found in Australia, but not all are dangerous. Only six species have caused injury to humans.

5. They are nocturnal and are most active at night when they hunt. This is also when males roam around in search of females.

6. They are burrowers, using their silk to create their burrows in dark places such as under logs. These burrows are a long funnel shape, giving them their name.

7. They hunt from their burrows by laying long strands of silk across the ground outside of them. When prey walks across these strands, the spider in the burrow senses these vibrations through the hairs on their legs. This allows them to ‘see’ exactly where the prey is and leap out to grab them. They then drag them back into the burrow.

8. Females spend most of their time in their burrows and rarely leave. They only hunt prey that come near. Males on the other hand are more active and wander further afield in search of females.

9. All bites come from males as females rarely leave their burrows. It means it is the males who come into contact with humans. Their venom is also five times more toxic because it contains a specific toxin which females don’t have.

10. Their fangs point down, which is unique to spiders, as most have fangs that work in a pinching motion.

11. Their fangs are like daggers and have been known to piece both leather shoes and fingernails.

12. They can live for up to 30 hours in water. Horrifyingly, they sometimes fall in suburban swimming pools, where they can survive underwater for 30 hours.

13. They are milked to produce anti-venom. The venom of the spiders is used to produce its anti-venom. So members of the public are encouraged to catch stray spiders and hand them in to be ‘milked’.