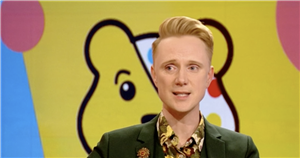 Drumming weatherman Owain Wyn Evans, who went viral at the weekend for his 24-hour drumathon challenge, broke down in tears live on Monday's BBC Breakfast.

The meteorologist heard the news he has raised over £3million for Children In Need after drumming for a whopping amount of time, joined by celebrities including McFly's Harry Judd and comedian Al Murray.

But, upon hearing the news that he'd smashed the £3million mark, Owain couldn't hold back the tears live on-air.

Appearing alongside Skunk Anansie drummer Mark Richardson, Owain was emotional as he recalled the 'big bang' moment in which a room full of drummers played along to the BBC Breakfast theme song – a moment which kickstarted his career initially.

Host Sally Nugent had to ask them: "Are you all right, the pair of you? You're wrecks, I can tell, still! Three days later!"

As Dan Walker chipped in: "How's the body, and how's the brain?"

But a disbelieving Sally pressed: "Are you sure?", to which Owain replied: "To be honest, no, I'm not sure. I think I've still got a lot of adrenaline in the system.

"I just told Mark, I've already cried this morning. I've cried about seven times every hour this weekend, because so much work went into [the drumathon]."

And later, as Owain's fundraising efforts managed to raise £3,062,418, the tears were flowing freely.

He could barely get his words out as he apologised for crying, explaining: "That's just… that's just so many… What I can't get my head round is that's so many fivers. That's so many people texting in or going on the website and giving what they can."

He admitted the money "is going to change lives", as he said: "Thank you to everyone who has donated. Honestly, I can't get over that.

"Wherever you are, wherever you live, there'll be children and young people who will benefit from this. Look at that number!"

It came after Owain once again broke down in tears as he reunited with his husband after the viral moment.

Looking dapper as ever in a light blue suit, Owain performed Baby One More Time by Britney Spears, alongside the Royal Marine Drumming Band, as the clock counted down the final seconds of the challenge.

Streams of gold confetti filled the air as the challenge came to an end, with the presenter breaking down in tears and hugging his husband and close friends in an emotional reunion.

He admitted he had "some problems" with his arms as they were drumming continuously for 24-hours – but said his "soft" hands held up okay.

BBC Breakfast airs every day from 6am on BBC One.